Today, the Saskatoon Star Phoenix gave prominent coverage to HRC’s efforts which led to the Sheaf’s board voting to pull an article that denied Israel’s right to exist, was replete with hateful lies and featured outright falsehoods. 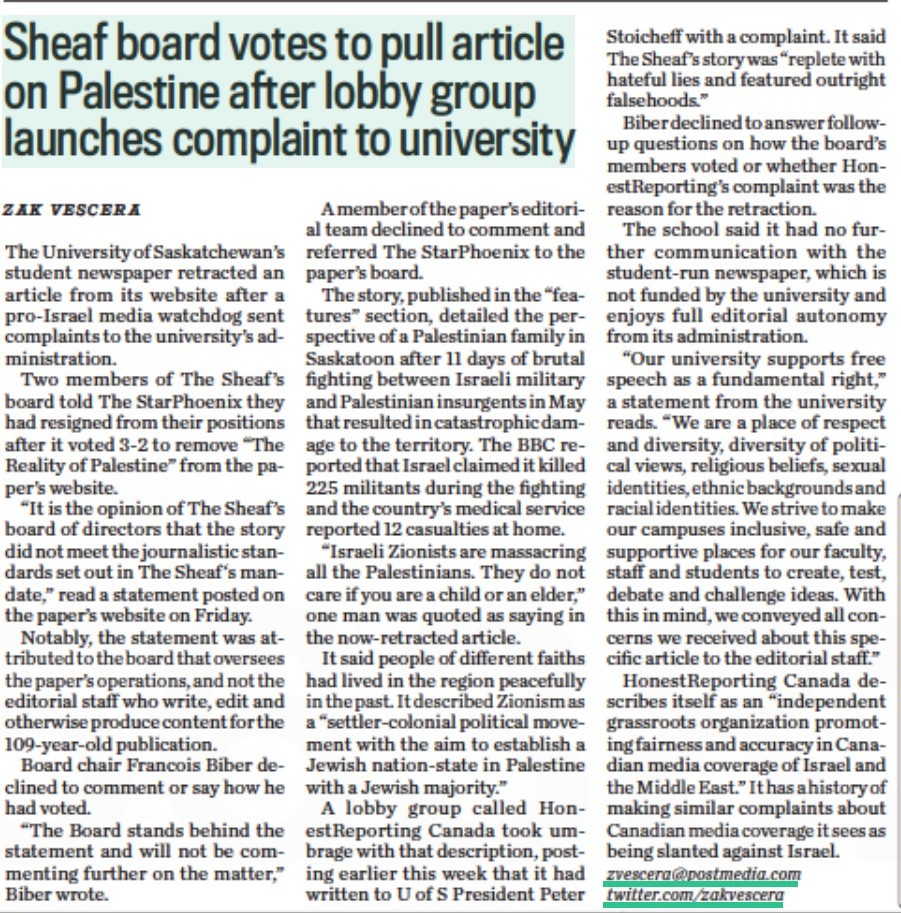 The Sheaf’s Board of Directors published the following letter explaining why they removed this anti-Israel article from its website as it “did not meet the journalistic standards set out in the Sheaf’s mandate.”

Read the full letter below:

On behalf of the board of directors for the Sheaf.

On June 2, 2021 a story was published on the Sheaf’s website pertaining to the ongoing situation in the Middle East between Israel and Palestine on the Gaza Strip. The story published contained pictures from across the world and quotes from a Palestinian family in Saskatoon sharing how they viewed the ongoing situation.

It is the opinion of the Sheaf’s board of directors that the story did not meet the journalistic standards set out in the Sheaf‘s mandate. The Sheaf prides itself on delivering accurate and balanced news and entertainment reporting.

The mission of the Sheaf is to inform and entertain students by addressing those issues that are relevant to life on campus, in the city or in the province. The newspaper serves as a forum for discussion on a wide range of issues that concern students. Written for students, by students, it provides unique insight into university issues through a student perspective. The staff of editors, photographers and artists collaborate with volunteers as student journalists to create a product relevant to students on the University of Saskatchewan campus.

The story “The Reality of Palestine” did not fulfill this mandate and because of this, the board has agreed to remove the story from the website with a three to two majority vote from the board members.

The Sheaf Board of Directors

Subsequent to HRC’s sending a letter of complaint to the University of Saskatchewan’s Chancellor and President which expressed our concern regarding anti-Israel journalism by its student paper, The Sheaf, the offending article “Photo Story: The Reality of Palestine,” by Aleshba Naseer, appears to have been removed from the Sheaf’s website and replaced with a 404 error message: 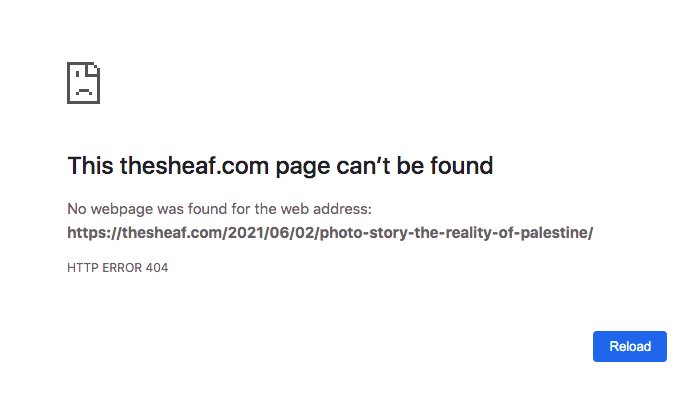 On Monday, June 7, 2021, HRC sent the following letter of complaint to the University of Saskatchewan’s Chancellor and President to voice our concerns about anti-Israel journalism being disseminated by its student newspaper,  The Sheaf, which published an article that denied Israel’s right to exist, was replete with hateful lies and featured outright falsehoods.

We are writing to express our dismay at an article which appeared in The Sheaf on June 2, “Photo Story: The Reality of Palestine,” by Aleshba Naseer. The reason we are writing to you is because the Sheaf is partially funded through levies paid by all students, graduate and undergraduate alike, at the University of Saskatchewan, and thus we feel the university bears responsibility for its content.

Our issue with the article in question is not a difference of opinions or perspectives; those are always welcome, particularly in an institution of higher learning. 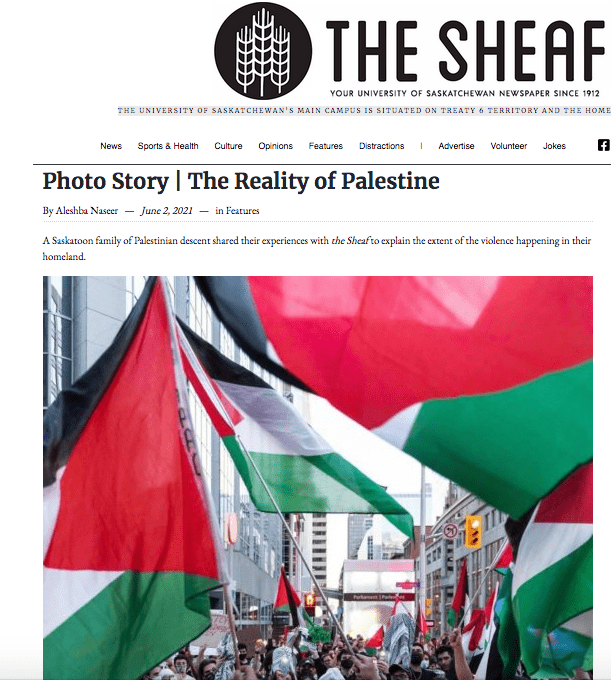 Unfortunately, the article does more than take liberties with the truth; it foregoes it altogether, preferring instead to perpetuate some of the most vicious and hateful lies being propagated today.

Most fundamentally, this article denies the right of self determination to the Jewish People in their historic homeland, a right that all peoples – including the Palestinians – have, but Naseer seems fit to deny only to Jews.

“Zionism is a settler-colonial political movement,” Naseer writes, adding that Zionism’s goal “depends on the displacement of the Palestinians.”

Not only is this allegation egregiously false, and made without any supporting evidence whatsoever, most fundamentally it denies the right for the Jewish people’s self determination. According to the International Holocaust Remembrance Alliance (IHRA) definition of antisemitism – signed by more than 30 countries, including Canada – denial of the Jewish people’s right to self-determination in their historic homeland is a denial of their collective rights, and thus an anti-Jewish position.

In truth, of course, Zionism is the polar opposite of a “settler-colonial political movement.” It is the desire for the Jewish people to determine their own destiny in the land where they have lived, without interruption, for three thousand years. In 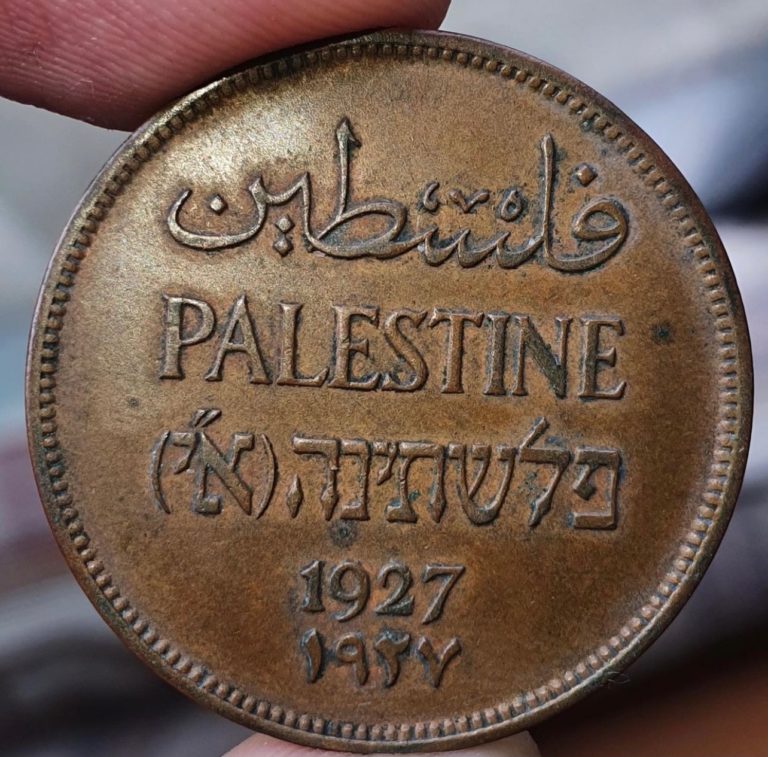 fact, Naseer published an image of a coin from 1927 which said “Palestine” on it, as evidence to bolster their claim, without acknowledging that, in fact, Hebrew writing is clearly apparent on the coin, disproving the lie that Jews were relatively recent arrivals to the area.

Evidence of Jewish habitation in historical Israel is plentiful, and anyone disputing these historical facts is no different than a denier of the Holocaust – trying to rewrite history to fit an ideological goal.

In the article, Naseer interviews Mohanned Jaradat, a local Palestinian in Saskatoon, and he is given wide platform to share falsehood after falsehood.

In one quote, he says: “In the time between 1948 and 1967, the Israelis learned a lot about occupation and methods on how they’ll continue with torturing the Palestinian people.” If one stops to consider that it was only in June 1967 that Israel won the Six Day War, and gained control of Judea & Samaria (commonly called the West Bank), Gaza and eastern Jerusalem & the Golan Heights, they will realize that by referring to the 1948 to 1967 period as occupation, Jaradat – and The Sheaf – is propagating the claim that Israel’s entire existence is an occupation.

Reasonable people can disagree on the policies and decisions made by successive Israeli governments, but to go so far as to deny the Jewish people a right to exist, and determine their own future, in their own ancestral homeland, is an egregious insult to Jews everywhere. 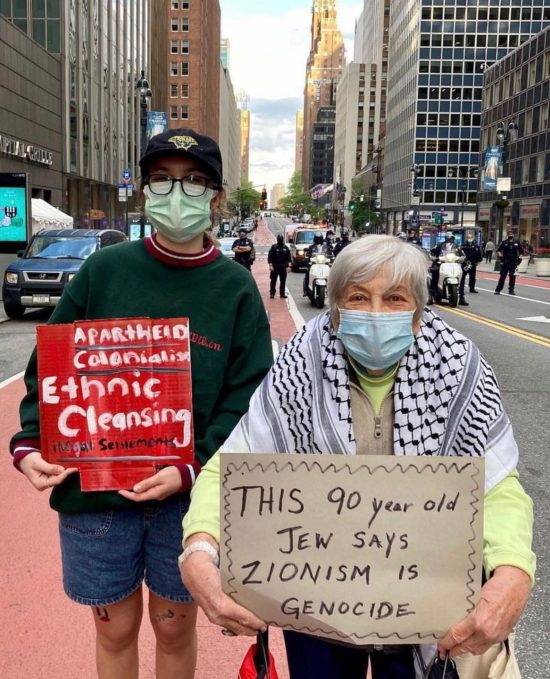 Jaradat claims that “Israeli Zionists are massacring all the Palestinians,” without any evidence whatsoever, nor does Naseer offer any challenge, critique or disclaimer that the statement was false. (A photo shows two anti-Israel activists holding signs saying “Zionism is genocide” and accusing Israel of “apartheid, colonialism and ethnic cleansing.”)

Today, Canada’s Jews are the single largest targeted group for religiously motivated hate crimes, according to a recent Statistics Canada report. During the recent clashes between Israel and Hamas, the Gaza-based terrorist group, Jews were randomly stalked, assaulted and harassed in cities across Canada by assailants. This open season on Canada’s Jews becomes possible when the world’s only Jewish state becomes defamed and libeled, and its very existence is called illegitimate.

Post secondary institutions like the University of Saskatchewan are a marketplace of ideas, where no topic should be off limits, unless it is driven by hatred. But the truth is not a political opinion, nor is intolerance. The Sheaf has a moral and a legal responsibility, as does the University of Saskatchewan for collecting funds on its behalf, to ensure that the official publication for the university’s student body is not being used as a medium for spreading hatred and misinformation.

Given that the article denies Israel’s right to exist and features outright falsehoods, we are asking that remedial action be undertaken by the Sheaf and for the University of Saskatchewan to ensure that the paper does not publish incendiary anti-Jewish commentaries. 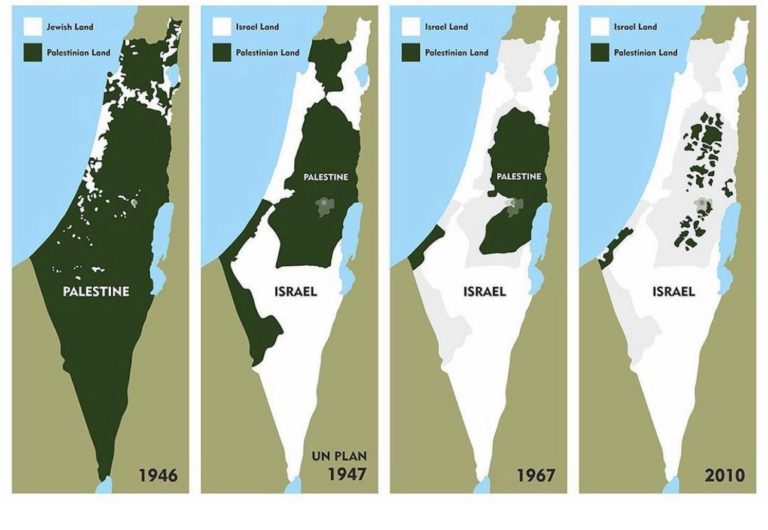 n propagandists to falsely portray all of what is now Israel as being under Palestinian sovereign control prior to 1947. The maps mislead by showing increasingly diminished Palestinian land loss since 1946. In truth, no Palestinian government has ever held control of any territory in the region until the Oslo Accords in the 1990’s, nor has there ever been a State of Palestine.)

We also request that the administration of the university formally adopt the IHRA definition of antisemitism, joining the federal government, the provinces of Ontario and New Brunswick, and a growing list of municipalities across the country. This definition will allow the University of Saskatchewan to identify and censure anti-Jewish incidents when they occur, ensuring that such discriminatory content is not able to hide behind the thin veneer of ‘anti-Zionism.’