In response to several unfair and inaccurate reports about Israel that CBC TV’s The National and CBC Radio’s World Report recently broadcast, HonestReporting Canada has filed a formal complaint with senior executives at our public broadcaster calling for immediate corrective action to remedy the CBC’s biased reporting about Israel. As of this writing, we await a reply from the CBC.

Young Palestinians see no end to the Israeli Occupation

Firstly, we took issue with this report’s headline which was appropriated by CBC editors. Ms. Evans’ report did not solely focus on Palestinian views about Israel’s so-called “occupation”. Instead, the report talked about the progress of building courthouses in the west bank (a joint Canadian-Palestinian project sponsored by CIDA), along with a discussion about how Palestinian politics are”frayed” and rife with “nepotism” and “corruption”. Yes, there was a discussion about the two state solution, Israeli settlements, and the presence of Israeli checkpoints, but this wasn’t its exclusive focus. Why then, did CBC editors want to focus reader’s attention to this issue to the exclusion of others? Alternative headlines that could have been published include: “Young Palestinians see their leaders as corrupt” or “Young Palestinians think the two state solution is elusive“. Furthermore, this observation about the views of young Palestinians is derived through anecdotal evidence that Ms. Evans procured by her asking a classroom of Palestinian students about their views of the peace process. That doesn’t mean that these student’s views were representative of most, if not all, young Palestinians. If we are to go by recent polls, 43% of Israelis and Palestinians back the two state solution.

In sharp contrast, see how CBC The National described this report on Twitter:

Accordingly, we told the CBC that this headline deserves to be amended.

Meanwhile, Ms. Evans took to Twitter on October 13 to promote this report, again by focusing attention on the “Israeli Occupation” (which for some unknown reason was put in capital letters). She has done this before on October 9 and September 10 referring to the “Occupied Palestinian Territories”.

Does anybody still believe in the two state solution? Young Palestinians don’t. Our piece on the Israeli Occupation now in its 52nd year. Camera work by @CBCJaredThomas and editing by Richard Devey. https://t.co/jan00J7cG8 pic.twitter.com/076cxrbsFj

With respect to the report itself, Ms. Evans says “the blueprint for a two state solution is also still handing in the air, the one the international community, including Canada, pays lip service to. For now, it remains an empty shell.” As well, the CBC website features a caption that subjectively says: “The dream of a two-state solution in the Israeli-Palestinian conflict appears in retreat, in large part because of the failure of the international community to insist upon it.”

These are highly loaded and subjective statements for the CBC and its reporter to make and this is really opinion disguised as news. You’d expect comments like these to come from a pundit not a professional journalist tasked to be neutral and objective. Lip service means that you agree with something, but do nothing to support it. To claim that Canada (and the international community) have done nothing to resolve the Israeli-Palestinian conflict, is a gross distortion of the truth. In sharp contrast, there have been endless peace plans and peace summits, the cajoling of the parties to conduct direct bilateral negotiations, the facilitation of aid, procurement of interim agreements, development and institution building, providing training and the standard fare of politics and shuttle diplomacy.

Ms. Evans also failed to acknowledge Israeli peace overtures and efforts in this report. Israel has always been looking to make peace, but any offer to create a Palestinian state has been ceremoniously rejected by its Arab brethren in 1937, 1939, 1947, 1979, 1990’s, 2000, and 2008. Importantly, the Israeli offer at the 2000 Camp David Accords was exceedingly generous. Former Israeli Prime Minister Ehud Barak offered the Palestinians 97% of the West Bank, 100% of Gaza, the dismantling of Israeli settlements in the west bank and even the surrender of precious Israeli land to increase the size of Gaza by a third. Yasser Arafat walked away, didn’t even make a counter-offer, and launched suicide bombings and an Intifada! In 2008, former Israeli P.M. Ehud Olmert offered much of the same as Barak, but was met with recalcitrance, rejectionism, intransigence and violence. Israel says that should the Palestinians agree on a peace plan which would afford Israel ironclad security guarantees, it would be more than happy to consider trading land for peace, as it has done in the past.

Ms. Evans stated in her report that in Hebron, the largest Palestinian city, there’s a “buffer zone pock-marked with (Israeli) checkpoints” and the only reason cited for the raison d’être for these checkpoints is this throw-away line: “Israel says it needs the checkpoints and what it calls its “security barrier” to prevent attacks against Israelis.” (This statement is in attribution and she fails to provide any context about these terror attacks, nor were any images or video footage shown to support these Israeli claims, what are  really undisputed facts, of non-stop Palestinian terror.)

Ms. Evans goes to Qalandia, an area where there have been countless Palestinian terror attacks against Israelis, but doesn’t go into any specifics about these attacks. This is just an Israeli claim after al. In truth, most recently there was a terror stabbing a couple weeks ago by a Palestinian woman. In May, a 40-year-old Palestinian terrorist was arrested with a knife in his possession in the area. Other attacks include the following in recent years:

As noted by Ms. Evans, 9,000 Palestinians cross at Qalandia everyday to enter Israel to work, visit family, for medical visits and to pray at various holy sites. Ms. Evans acknowledges that wait times at Qalandia have been drastically cut short by Israel thanks to its use of biometric card scans and speed gates, but this statement gets ultimately discounted by her quoting a Palestinian saying that this effort is really just a whitewash, it’s just an Israeli “marketing technique” to make Israel look better, says the Palestinian. The entire Israeli effort and significant investment of $85-million dollars to help Palestinians gets cast in a negative light by the CBC. No mention was made that this effort serves to remove friction and conflict between Palestinians and Israeli soldiers.

As with her CBC National report, Ms. Evans’ October 9 World Report radio segment frames Israeli use of facial recognition technology (biometrics) as merely another level to exert control over Palestinians. As with her CBC National report, none of the attacks or context of Palestinian terrorism is referenced. All she says is that “Israel says it needs the checkpoints to prevent potential attacks…” To listen to this report please click here or on the image below.

Ms. Evans says in her CBC National report that: “There are now more than 600,000 Israeli citizens living in settlements in the occupied Palestinian territories including east Jerusalem. The settlements are considered illegal under international law and governments including Canada, see them as a major obstacle to peace, but nothing the international community has said or done all these years has convinced the Israeli government to stop them.” Again, Ms. Evans casts the international community as feckless. Ms. Evans fails to explain that Israel disputes the claim 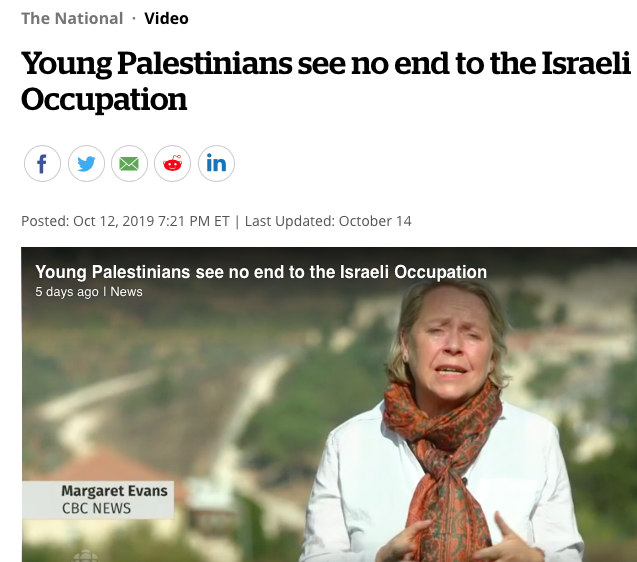 that the territories are “occupied,” saying they should be regarded as disputed. Israel says these areas were assigned to be part of the Jewish Homeland before the creation of the Israeli state. Israel says they can’t be “occupied” as there wasn’t a sovereign of the area before the 1967 Six Day War waged by pan-Arab nations to wipe the Jewish state off the map and Israel says it has ancestral, religious and legal rights to the areas it regards as Judea and Samaria. Ms. Evans fails to acknowledge that Israel annexed east Jerusalem in 1981 and that it considers Jerusalem its eternal and indivisible capital. Israel says UN Resolution 242 allows it to remain in the area until secure and recognized borders are agreed upon. Ms. Evans fails to acknowledge that Israel disputes the claim of the international community that its presence in the area is “illegal”. Furthermore, Ms. Evans misleadingly implies that Israel hasn’t done anything to stymie settlement expansion, but that’s just not supported by the facts. In fact, during the Obama years, Israel instituted an unprecedented 10-month moratorium on settlement building (done under P.M. Netanyahu’s reign) and aside from 1 or 2 new settlements authorized by Israel only recently, all other settlement expansion has been to account for the natural growth of its citizens.

Ms. Evans provides an update on how Canada is spending $32-million for a new courthouse for use by 350,000 Palestinians. Ottawa is funding this effort through CIDA to create an independent judiciary for a future independent “Palestine.” Canadian judges mentor their Palestinian counterparts. Ms. Evans’ also notes that the status of Palestinian institution building is in “atrophy.”

While we would be remiss in not acknowledging some silver linings to Ms. Evans’ report as she does acknowledge Palestinian “nepotism” and “corruption,” however, the lion share of the criticism in this report inaccurately and unfairly focuses on the so-called “52-year Israeli occupation.”

If you would like to communicate your concerns about the CBC’s biased reporting about Israel, please send an email to Jack Nagler, the CBC’s Ombudsman at ombud@cbc.ca. Please refer to Ms. Evans’ CBC The National report on October 11 and her CBC World Report segment on October 9. Please also send tweets to CBC reporter Margaret Evans.