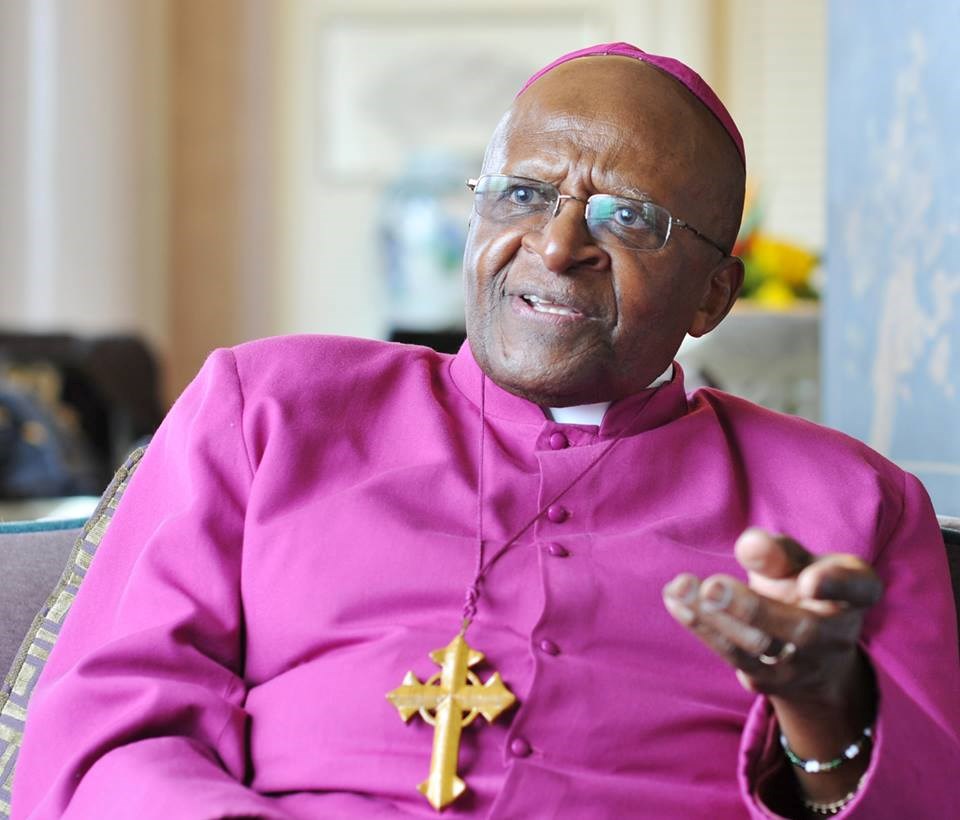 While Demond Tutu’s campaign against discrimination in South Africa was laudable, much of the media, including Gerry Chidiac, a regular contributor to the Prince George Citizen, glossed over a dark aspect of Tutu’s legacy: his anti-Israel agenda.

HRC responded to Chidiac’s January 16 column and our rebuttal was published on January 18 and can be read in full appended below. We have also asked this newspaper’s editors to retract Mr. Chidiac’s egregiously false statement where he claimed that:

Many world leaders – including U.S. President Joe Biden, U.K. Prime Minister Boris Johnson and Canadian Prime Minister Justin Trudeau – praised Tutu as a strong moral voice in the world. All three also demonize peaceful movements that challenge Israel to treat Palestinians more humanely. These boycotts and sanctions were supported by Tutu and continue to be supported by people around the world, including millions of Jews and even many Israelis.”

While Mr. Chediac is entitled to his own opinions, he’s not entitled to his own facts. There is no factual evidence which confirms that “millions of Jews” support the antisemitic boycott, divestment and sanctions (BDS) movement against Israel. This patently false statement deserves to be retracted immediately and for the online version of this column to remove this reference as soon as possible.

To its credit, the Citizen has amended the online column replacing the words “millions of” with “many”. While we appreciate that this remedial action was undertaken, we have requested that a formal retraction notice be published in print and online to disavow this claim. Stay tuned to this page for future updates.

On Boxing Day 2021, Desmond Tutu died at the age of 90. The South African archbishop, known for his anti-apartheid activism, was eulogized around the world and in the Prince George Citizen by Gerry Chidiac as a campaigner and advocate for human rights. 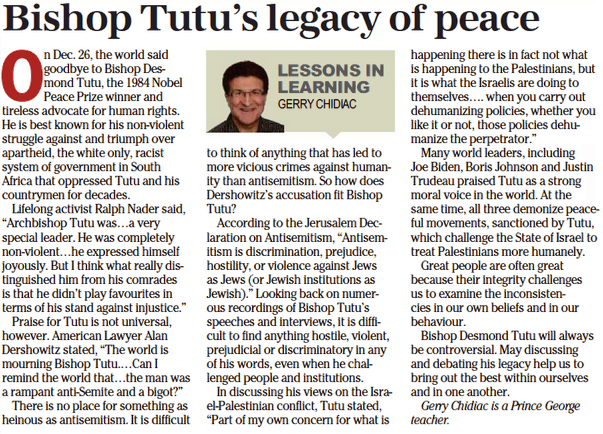 And while his campaign against discrimination in South Africa was laudable, much of the media glossed over a dark aspect of Tutu’s legacy: his anti-Israel agenda.

Tutu, an outspoken proponent of the BDS campaign against Israel, referred to Israel’s defense against Hamas missiles from Gaza as “a gross violation of human rights.”

Tutu said that anyone who continues “to do business with Israel” was promoting a “profoundly unjust” situation in the Middle East.

Tragically, Tutu’s statements often veered into classical antisemitism. In some of his public remarks and writings, Tutu referred to the prominent “Jewish lobby” in the United States, rather than the accurate “pro-Israel lobby.”

According to law professor Alan Dershowitz, Tutu invoked classic antisemitic stereotypes and tropes about Jewish “arrogance,” “power” and “money.” He has characterized Jews a “peculiar people,” and has accused “the Jews” of causing many of the world’s problems.’”

Unfortunately, that’s not the end of Tutu’s inflammatory remarks. Zionism is “a policy that to me looks like it was very many parallels with racism,” the archbishop once stated in an interview.

Archbishop Tutu’s statements not only delegitimized Israel; his words were effectively a statement that the Jewish People had no historical right to their ancestral homeland.

In 2014, when Tutu told an anti-Israel rally that “We are opposed to the injustice of the illegal occupation of Palestine,” he was erasing three thousand years of Jewish history and depicting Jews as illegal interlopers in their own land.

After Tutu’s death, Gerry Chidiac justifiably lauded his work in South Africa, but whitewashed his longstanding anti-Israel fixation, creating a hero out of a man who held extremely flawed and dangerous views.