As Executive Director of HonestReporting Canada, I’ve been a regular recipient of antisemitism, bigotry and xenophobia during my 16+ year career doing Israel advocacy, and for the most part, I’m immune to it, but for a supposedly reputable newspaper to publish a column by anti-Israel detractor Richard Deaton comparing me to chief Nazi propagandist Joseph Goebbels, Hitler’s sidekick propaganda minister who was a virulent antisemite and who called for the extermination of Jews, was beyond the pale. 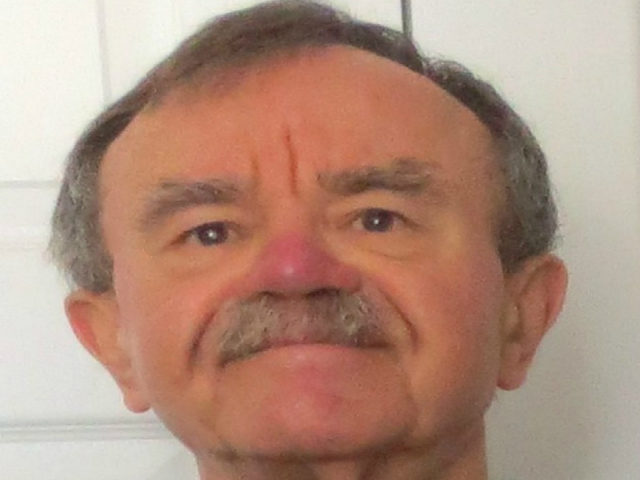 I stand in solidarity with Henry Srebrnik (pictured right), a political science professor at the University of Prince Edward Island, who (like me) will no longer be writing columns for The Guardian newspaper in Charlottetown, after it published an op-ed on January 23 headlined: “Sue Me, You Zionist Goons”

Shame on The Guardian.

Read more about this matter thanks to the Canadian Jewish News (The CJN) who dutifully covered this matter. See the CJN’s full article appended below. 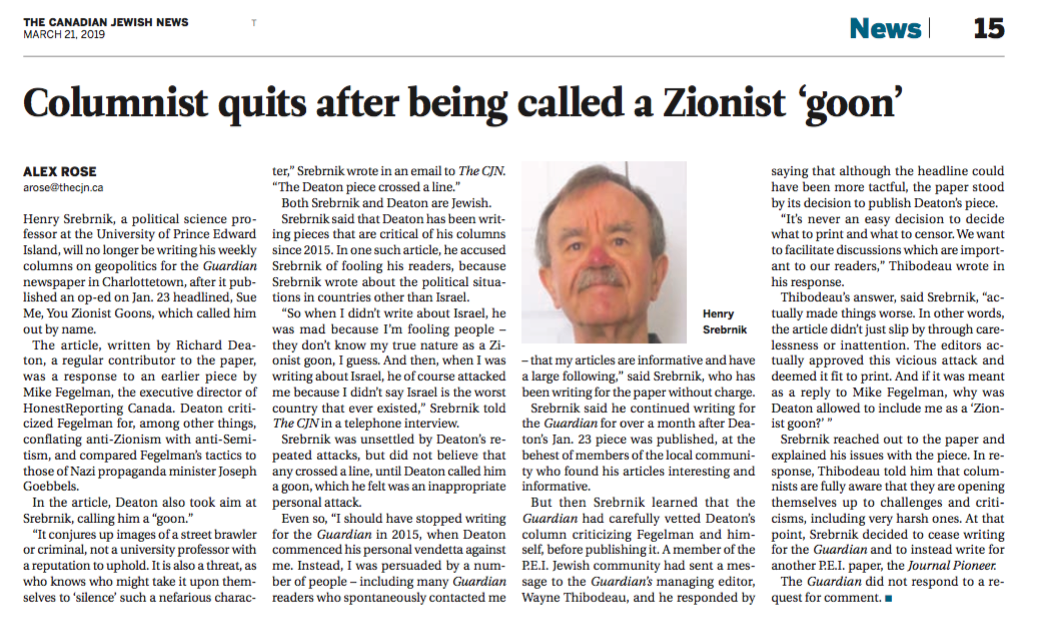 Henry Srebrnik, a political science professor at the University of Prince Edward Island, will no longer be writing his weekly columns on geopolitics for the Guardian newspaper in Charlottetown, after it published an op-ed on Jan. 23 headlined, Sue Me, You Zionist Goons, which called him out by name.

The article, written by Richard Deaton, who’s a regular contributor to the paper, was a response to an earlier piece by Mike Fegelman, the executive director of HonestReporting Canada. Deaton criticized Fegelman for, among other things, conflating anti-Zionism with anti-Semitism, and compared Fegelman’s tactics to those of Joseph Goebbels.

In the article, Deaton also took aim at Srebrnik, calling him a “goon.”

“It conjures up images of a street brawler or criminal, not a university professor with a reputation to uphold. It is also a threat, as who knows who might take it upon themselves to ‘silence’ such a nefarious character,” Srebrnik wrote in an email to The CJN. “The Deaton piece crossed a line.”

Both Srebrnik and Deaton are Jewish.

Srebrnik said that Deaton has been writing pieces that are critical of his columns since 2015. In one such article, he accused Srebrnik of fooling his readers, because Srebrnik wrote about the political situations in countries other than Israel.

“So when I didn’t write about Israel, he was mad because I’m fooling people – they don’t know my true nature as a Zionist goon, I guess. And then, when I was writing about Israel, he of course attacked me because I didn’t say Israel is the worst country that ever existed,” Srebrnik told The CJN in a telephone interview.

Srebrnik was unsettled by Deaton’s repeated attacks, but did not believe that any crossed a line, until Deaton called him a goon, which he felt was an inappropriate personal attack.

Even so, “I should have stopped writing for the Guardian in 2015, when Deaton commenced his personal vendetta against me. Instead, I was persuaded by a number of people – including many Guardian readers who spontaneously contacted me – that my articles are informative and have a large following,” said Srebrnik, who has been writing for the paper without charge.

Srebrnik said he continued writing for the Guardian for over a month after Deaton’s Jan. 23 piece was published, at the behest of members of the local community who found his articles interesting and informative.

But then Srebrnik learned that the Guardian had carefully vetted Deaton’s column criticizing Fegelman and himself, before publishing it. A member of the P.E.I. Jewish community had sent a message to the Guardian’s managing editor, Wayne Thibodeau, and he responded by saying that although the headline could have been more tactful, the paper stood by its decision to publish Deaton’s piece.

“It’s never an easy decision to decide what to print and what to censor. We want to facilitate discussions which are important to our readers,” Thibodeau wrote in his response.

Thibodeau’s answer, said Srebrnik, “actually made things worse. In other words, the article didn’t just slip by through carelessness or inattention. The editors actually approved this vicious attack and deemed it fit to print. And if it was meant as a reply to Mike Fegelman, why was Deaton allowed to include me as a ‘Zionist goon?’ ”

Srebrnik reached out to the paper and explained his issues with the piece. In response, Thibodeau told him that columnists are fully aware that they are opening themselves up to challenges and criticisms, including very harsh ones. At that point, Srebrnik decided to cease writing for theGuardian and to instead write for another P.E.I. paper, the Journal Pioneer.

In an emailed statement, the Atlantic Jewish Council said it was “shocked and disappointed to see the types of op-eds that the P.E.I. Guardian has published, especially the inflammatory and misleading piece of Jan. 23, entitled Sue Me, You Zionist Goons. We are in touch with the leadership at theGuardian to ensure that this sort of misinformation is not published in the future.”

The Guardian did not respond to a request for comment.