The McGill Daily, a campus paper accused of antisemitism and known for singling Israel out for exclusive condemnation, has reaffirmed its “anti-Zionist stance” that sees pro-Israel commentaries banned from the publication.

In its November 4 edition, the paper’s editorial board penned a “response” that characterized the State of Israel as a “racist” and “colonial movement” and that sought to justify its ban of pro-Zionist voices saying pro-Israel supporters don’t deserve a “… platform to ideas which dehumanize a group of people…” due to their “anti-Arab racism and dehumanization of Palestinian people.” 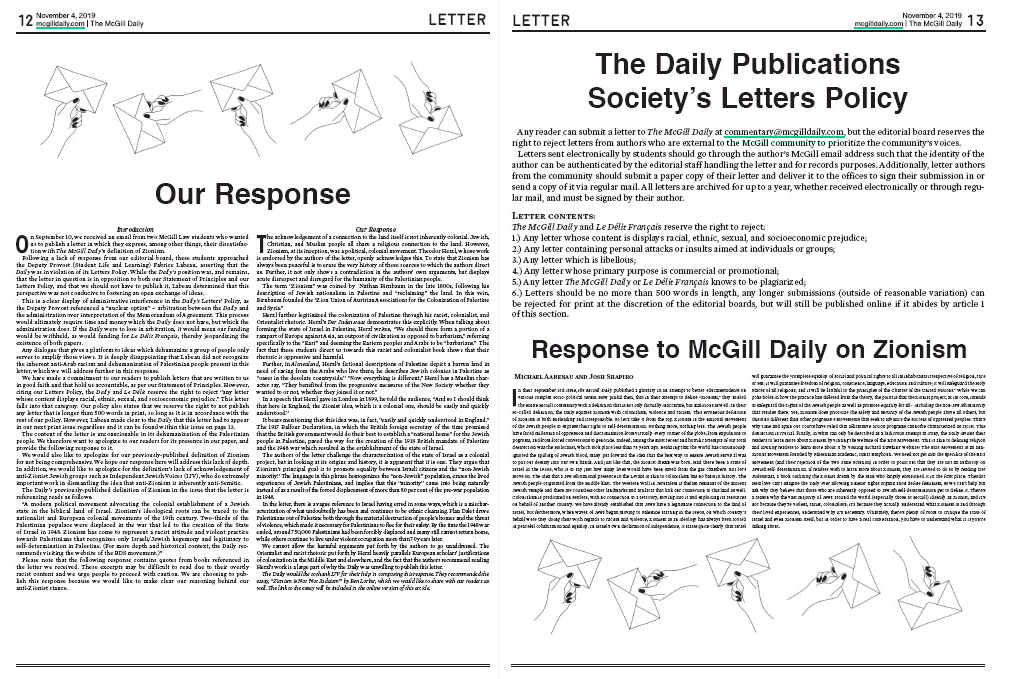 On September 10, two pro-Israel McGill Law School students, Michael Aarenau and Josh Shapiro, commendably wrote a cogent rebuttal to the Daily’s “definition” of Zionism, a definition that we regard as being antisemitic for claiming that Zionism is racism. As the Daily never responded to their submission, the students reached out to McGill’s Deputy Provost, Fabrice Labeau, saying that the Daily was in breach of its own policies and was therefore engaging in discrimination, due to its avowed ideological bias and failure to foster an open exchange of ideas. It’s praiseworthy that Provost Labeau informed the Daily that if it did not publish Mr. Aarenau and Shapiro’s rebuttal that an arbitration may result in the paper’s funding being withheld. The McGill Daily’s main source of revenue of over $300,000 comes from McGill University student’s fees. Not surprisingly, The Daily postured as if it was the victim accusing Provost Labeau of “administrative interference”.

Under pressure, and with the threat that its funding could be jeopardized, the Daily published Mr. Aarenau and Shapiro’s rebuttal which explained that “Zionism is the national movement of the Jewish people to express their right to self-determination” and which countered claims that Jews are “colonists” of the land of Israel, by asserting Jewish indigeneity to the Jewish state.

Importantly, the IHRA (International Holocaust Remembrance Alliance’s) definition of antisemitism asserts that “Denying the Jewish people their right to self-determination, e.g., by claiming that the existence of a State of Israel is a racist endeavour” is antisemitism.

The Daily’s own response claimed that “The content of the (Aarenau/Shapiro) letter is unconscionable in its dehumanization of the Palestinian people. We therefore want to apologize to our readers for its presence in our paper, and provide the following response to it.”

Importantly, the Daily publicly acknowledged and thanked the anti-Israel groups Solidarity for Palestinian Human Rights (SPHR) of which, it has previously promoted, and Independent Jewish Voices (IJC), both of which are zealous supporters of the antisemitic BDS movement, for helping the Daily “in composing this response.”

In so doing, the Daily openly acknowledged the role that anti-Israel groups have in producing its anti-Israel and antisemitic “journalism”. So much for objectivity, fairness and political neutrality at the Daily.

For some time now, HonestReporting Canada (HRC) has taken the Daily to task for its bigoted anti-Zionist policy and for openly accusing Israel of “apartheid,” “pinkwashing”, “ethnic cleaning,” “imperialism” and for encouraging people to boycott, divest and sanction Israel. The Daily’s gratuitous attacks on Israel, along with its being in bed with anti-Israel groups, and its aversion to providing a platform to a pro-Israel Zionist discourse has contributed to a toxic atmosphere at McGill. As a result, Jewish and pro-Israel students feel they’re being targeted and suffer from prejudice, stigmatization, and are being demonized.

Enough is enough. HRC has requested a meeting with McGill University administrators and has filed a grievance asking the administration to conduct a formal investigation and to take immediate action to ensure that the Daily ceases it’s anti-Israel animus and avowed discriminatory policies.