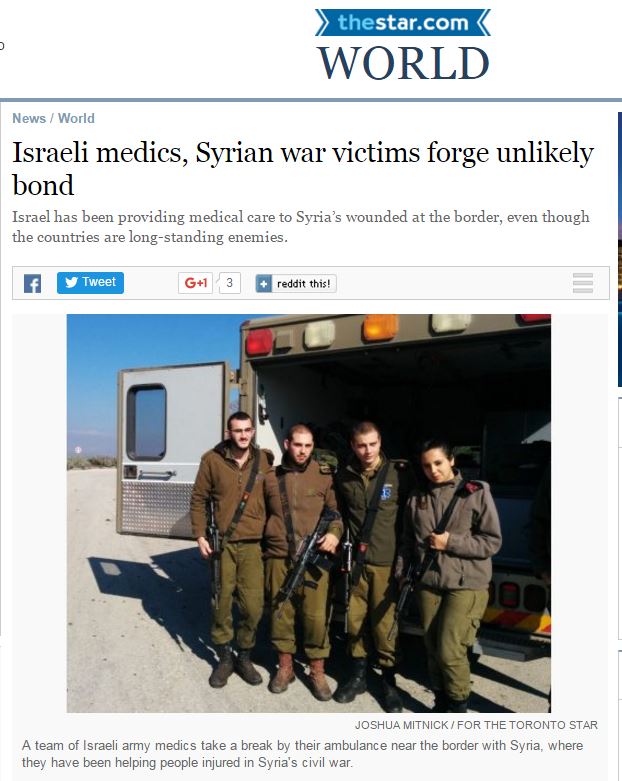 1) In the Toronto Star on January 9, reporter Joshua Mitnick produced a worth reading article about how “Israeli medics (and) Syrian war victims forge unlikely bond”.

The report notes how: “Israel has been providing medical care to Syria’s wounded at the border, even though the countries are long-standing enemies.”

Mitnick reports that: “The soldier is part of an Israeli military medical unit that for the last three years has been providing first aid at the border to hundreds of Syrians seeking assistance, even though the two countries remain in a state of war. Some 2,000 have been transferred from the border for treatment to Israeli hospitals.”

Read the article in full by clicking here.

2) In the National Post today, Gary Gambill of the Middle East Forum observes:

“A friend of mine recently lamented that the Western media was downplaying the brutal string of Palestinian stabbings that has claimed 25 Israeli lives since September.

I nodded in assent, but couldn’t help recalling the closing scene of the film Casablanca. With religious and ethno-sectarian violence rampant in Iraq, Syria, Libya, Yemen, and across the Arab world claiming several tens of thousands of lives every year, fuelling an unprecedented wave of global Sunni Islamist terror, Israeli-Palestinian troubles “just don’t amount to a hill of beans in this crazy world.”

It wasn’t so very long ago that the vast majority of Western pundits thought otherwise. Since Israel stood alone as the most vilified antagonist in Arab public life for over six decades, outside observers assumed the Israeli-Palestinian conflict to be a singular affront to Arabs everywhere, a cause of their collective political dysfunction, and therefore a leading source of the Middle East’s problems. Arab anger toward Israel “weakens the legitimacy of moderate regimes,” explained U.S. CENTCOM commander David H. Petraeus in 2010.”

3) On CBC Sunday Edition, host Michael Enright interviewed author and journalist Ron Rosenbaum on the topic of Israel’s many existential threats. Rosenbaum argues that anti-Semitism has reached such a pitch throughout the world, particularly among Israel’s antagonists in the Middle East, that the destruction of Israel is a real possibility.