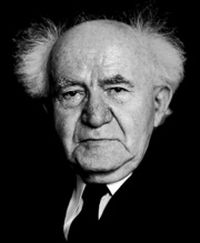 On October 8, HonestReporting Canada was given space in the Chronicle Herald to rebut anti-Israel detractor Garry Leech who sought to smear former Israeli Prime Minister David Ben-Gurion as a terrorist and an advocate of ethnic cleansing in an October 2 commentary.

See also an excellent rebuttal commentary appended below by Allen Robertson which was also published by the Herald.

David Ben-Gurion was Israel’s first prime minister and it’s thanks to his tireless efforts that the Jewish state was founded and that it exists and flourishes today.

Having been on the vanguard in leading the struggle to establish the State of Israel in May 1948, and having declared Israel’s independence and fought off five combined Arab armies determined to wipe Israel off the map, Ben-Gurion is rightly regarded in history as one of Israel’s finest and a nation’s treasure.

Ben-Gurion served as prime minister and defence minister, and as premier, he oversaw the establishment of the state’s institutions and united several Jewish militias into the Israel Defence Forces. According to Jewish Virtual Library, Ben-Gurion presided over various national projects aimed at the rapid development of the country and its population: “Operation Magic Carpet,” the airlift of Jews from Arab countries, the construction of the national water carrier, rural development projects and the establishment of new towns and cities. In particular, he called for pioneering settlement in outlying areas, especially in the Negev.

Garry Leech’s efforts to smear Ben-Gurion and to tarnish his legacy are tenuous and the quotes he attributes to Ben-Gurion and other Zionist leaders cannot be verified. Leech relies on Israeli-born political science professor and self-proclaimed “historian” Ilan Pappe as a trusted source and yet, Pappe is widely known for his anti-Israel animus, historical revisionism and poor methodology and faulty research.Writing in the New Republic, renowned historian Benny Morris said that “Ilan Pappe must be one of the world’s sloppiest historians; at worst, one of the most dishonest.”

Make no mistake, Jews are the indigenous people of the land of Israel and have lived there, uninterrupted, for over 3,000 years. Importantly, Leech’s suggesting that Ben-Gurion favoured the ethnic cleansing of Arabs, is actually the opposite of the truth. In fact, Ben-Gurion actually wrote the following in a letter: “We do not want to and we do not have to expel Arabs and take their place.”

Israel supported the Partition Plan which would have created separate Jewish and Arab states. Sadly, the Arabs rejected the plan and waged war, which displaced hundreds of thousands who were encouraged by the Arab world to leave the area en masse.

The origins of the so-called “Naqba” were caused by a war of annihilation launched against the nascent Israeli state by neighbouring Arab armies.

It was in 1948 that the Arabs refused to establish a state side-by-side with the Jewish one. While Israel successfully fought off five united Arab armies, one of two fates awaited the Jews whose cities were captured by the Arabs: massacre or forced expulsion. This Arab-instigated war created a dual refugee problem, with over 800,000 Jews being forcibly expelled from their homes in Arab and Muslim countries (they were successfully resettled in Israel and other countries), whereas the Arab world forced approximately 800,000 Palestinians to live in squalor in refugee camps, not granting them citizenship, equal rights, etc.

Before he became Israel’s first prime minister, David Ben-Gurion is said to have earned 50 cents a day as a soldier and slept on the ground in bell tents in the small town of Windsor, N.S.

The town of Windsor should be lauded for celebrating Ben-Gurion’s remarkable and little-known connection to Nova Scotia on the 100th anniversary of the training of the Jewish Legion.

Consider the source when weighing deeds of Israel’s founder

In Windsor recently, the 100th anniversary of the Jewish Legion’s presence at Fort Edward was commemorated as part of the observances for the end of the First World War.

Among those soldiers was a young David Ben-Gurion, who later became Israel’s first prime minister. Descendants of some soldiers attended the ceremony in Windsor, which made the town event even more special. Well done, citizens and veterans of Windsor.

Then on Oct. 2, The Chronicle Herald published online a highly critical opinion piece from Garry Leech who “teaches international politics at Cape Breton University and is author of eight books about U.S. foreign policy, globalization and human rights.”

Leech attacked Ben-Gurion as a Zionist terrorist and a promoter of the ethnic cleansing of Palestinians from Israel territory. He cited Ilan Pappe’s writings to support his own position. It would have been advisable for the Herald to have enlarged on Leech’s background: he’s a left-wing, vehement opponent of Israel and strong advocate of the BDS movement (Boycott, Divest, Sanction of Israeli goods and of Israel) — as is Pappe.

Leech is the editor of the on-line publication Palestine Journal which includes verbal attacks on Israel, and on Canada for supporting the latter. Among his articles, Leech has written, “Why Israel Should Not Exist” (2015), “Fighting Colonialism in Palestine and Canada” (2015) and “Canada’s support for Israel is a ‘hate crime’” (2015).

Palestine Journal, under Leech’s editorship, has links listed to several groups that are defined as terrorist groups by the Canadian government, as well as links to armed groups.

One questions why the Herald did not offer disclosure about Leech, why CBU proudly employs him to teach young college students, or why Leech’s use of settler colonialism (a deeply flawed historiographic and sociological paradigm) goes unanswered by Nova Scotia academics.

One is better served on the topic of Ben-Gurion and Israel by such books as Walter Laqueur’s A History of Zionism. Settler colonialism advocates among Canadian historians need to reappraise their stance, for this interpretative approach too readily lends itself to anti-Israeli treatises.