The Spectator issued the following correction on August 30 after wrongly claiming in a headline appropriated to our letter that we advocate for BDS opinions to be censored: 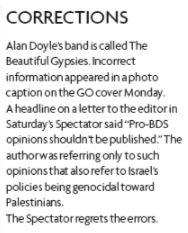 In the Hamilton Spectator on August 27, HRC Executive Director Mike Fegelman condemned BDS and the Spectator’s recent publication of commentaries accusing Israel of committing a “genocide” of Palestinians. Such comments, we told the Spectator, are beyond the pale, without foundation, and are not worthy of publication by a respected newspaper like the Spectator.