HRC Commentary Published on Huffington Post: "ICC Membership Only Hinders the Palestinian Cause"

In our latest Huffington Post Canada commentary entitled “ICC Membership Only Hinders the Palestinian Cause”, HRC Executive Director Mike Fegelman writes: “The PA’s diplomatic stunt is a zero-sum game that will only obstruct the peace process and assault Israel’s legitimacy. In no way does the Palestinian attempt to join the International Criminal Court advance the prospects for peace with Israel, instead, Palestinian intransigence only impedes its own path to procuring statehood.” 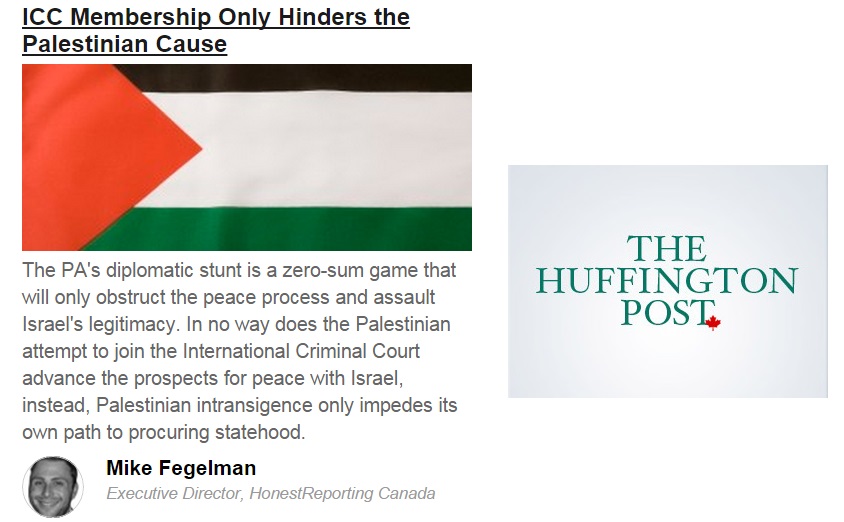 Read the full commentary that was published today appended below:

Unilateral dictates and one-sided actions rarely bode well in a negotiating process. Whether in contract disputes or divorce proceedings, unilateralism is oftentimes a harbinger of one party’s lack of intent to resolve grievances and is revelatory of malice, shows diminished trust and an absence of mutual respect.

At a prima facie level, such efforts constitute diplomatic warfare against your opponent, tactics meant to malign and weaken the negotiating posture of your adversary.

In yet another effort to skirt negotiations with Israel, protract the conflict, and destroy confidence; the Palestinian Authority’s recent decision to join the International Criminal Court (ICC) has shown the PA’s commitment to internationalize the conflict by attempting to procure statehood without negotiating a peace accord. Presently in Israel, Foreign Affairs Minister John Baird reiterated Canada’s opposition to the PA’s efforts to pursue war crimes charges against Israel at the International Criminal Court, saying the PA crossed a “red line.”

When it comes to the ICC, it’s the Palestinians, not Israel, who have more to lose than gain. It’s the Palestinians who are in a unity government with a bona fide terror organization, Hamas, which is committed to Israel’s destruction and whose rocket attacks on Israeli population centers and its using civilians as human shields are double war crimes. These violations of international law and the Geneva Conventions could see charges laid at the Palestinian doorstep.

The PA’s efforts to accede to the Rome Statute of the ICC are a flagrant violation of binding instruments of international law like the Oslo Accords, the consequences of which have already triggered sanctions in the form of Israel’s withholding of $125 million of tax revenues that could lead to the dissolution of the Palestinian Authority. The Palestinian unilateral gambit may also lead to the immediate cut off of American financial support to the PA in the hundreds of millions of dollars. Israel could also retaliate by limiting gasoline, electricity and travel permits for Palestinian leaders.

More to the point, it’s highly unlikely that the Palestinians will even be able to sue Israel in the ICC as the PA does not govern defined territory, nor does it possess even the basic requirements for statehood. According to Alan Baker, Director of the Institute for Contemporary Affairs at the Jerusalem Center for Public Affairs, the “Palestinian request is legally flawed and was determined under false pretenses — “false” because there exists no sovereign Palestinian state, and “pretenses” because of the pretension by the (UN) Secretary General as if such a state exists when he is fully aware that there is no legal basis for this.”

Israel’s Ministry of Foreign Affairs asserts that: “A 2009 declaration by the Palestinian Authority accepting the jurisdiction of the Court was deemed invalid by the ICC Prosecutor in early 2012 as he did not consider Palestine a “state” for the purposes of the Rome Statute. The Prosecutor did not see any basis to reassess the application after a vote in the United Nations General Assembly later in 2012 which recognized Palestine as a non-member observer state.”

Importantly, the ICC is considered an option of last resort and is used only when nations accused of war crimes do not have legal systems in place that allow for proper investigations of itself. Israel’s high court duly investigates matters about Israeli military conduct and has received laurels and recognition for its efforts. Meanwhile, Israel’s military is praised as the most moral and accountable in the world. Israel, along with the United States, is not a member of the ICC and therefore is not subject to its jurisdiction, but Israel contends it’s an active and consistent supporter of the concept of the ICC, while acknowledging the importance and “indispensability, of an effective court for the enforcement of the rule of law and prevention of impunity.”

Palestinian leaders need to abandon the fantasy that international pressure can coerce Israel into making unilateral concessions that don’t address its security needs and rights. Mideast peace can only be procured through direct face-to-face negotiations between Israelis and Palestinians without preconditions. The PA’s continued rejectionist efforts of bypassing negotiations doesn’t contribute to the enhancement and normalization of relations with Israel.

The PA’s diplomatic stunt is a zero-sum game that will only obstruct the peace process and assault Israel’s legitimacy. In no way does the Palestinian attempt to join the International Criminal Court advance the prospects for peace with Israel, instead, Palestinian intransigence only impedes its own path to procuring statehood.