The Balfour Declaration’s Centenary is a Historic Moment

As noted in our commentary: “The Declaration represented a national commitment by the British government for Zionist aspirations in Palestine, which ultimately laid the groundwork for Israel’s founding, without which, the Jewish state may never have been created.”

Our commentary published in the Free Press which has a readership reach of close to 500,000, further serves to crystallize the importance of the Balfour Declaration while affirming the Jewish legal rights to Israel.

An unabridged version of our commentary can be found immediately below. To view the commentary on the Winnipeg Free Press website click here (an exclusive online subscription is required). 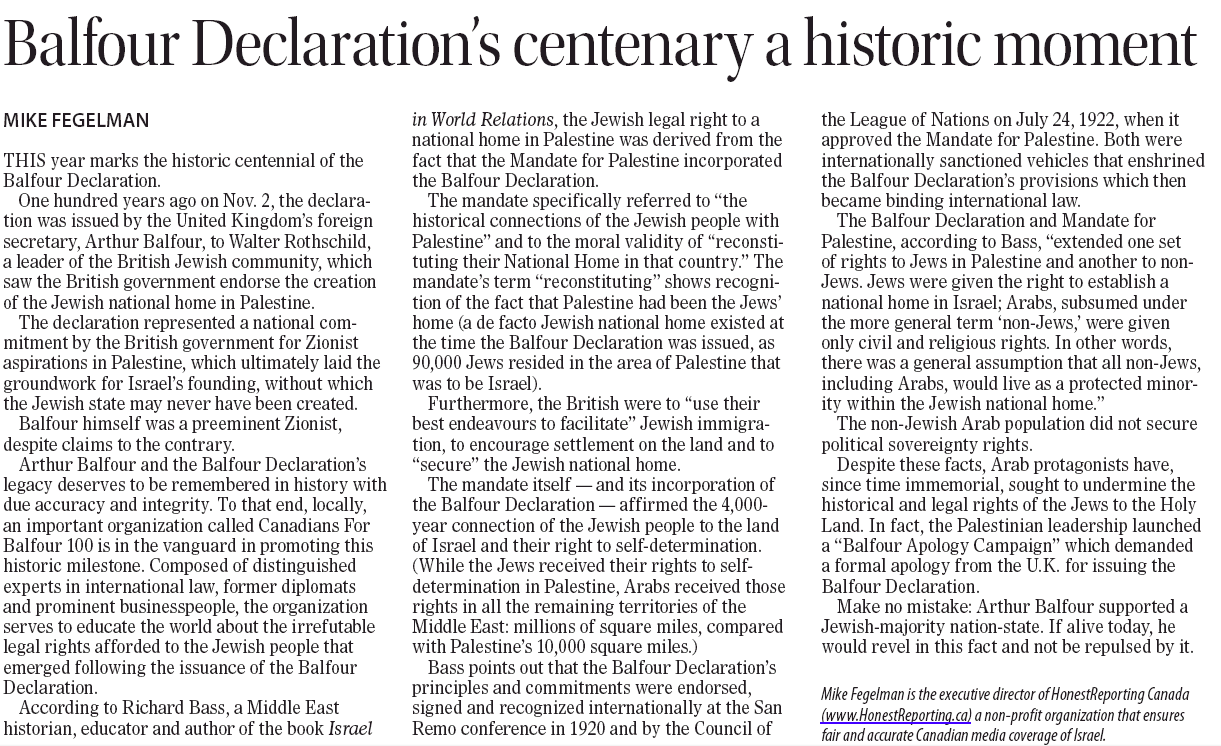 This year marks the historic centennial of the Balfour Declaration.

100 years ago on November 2, the Declaration was issued by the UK’s Foreign Secretary, Arthur Balfour, to Walter Rothschild, a leader of the British Jewish community, which saw the British government endorse the creation of the Jewish national home in Palestine.

The Declaration represented a national commitment by the British government for Zionist aspirations in Palestine, which ultimately laid the groundwork for Israel’s founding, without which, the Jewish state may never have been created.

Balfour himself was a preeminent Zionist, and yet, a March 14 Winnipeg Free Press column by Michael Coren claimed that Balfour was”repulsed by the idea of a country full of Jews!”

When asked to substantiate this claim by our organization, HonestReporting Canada, which promotes fair and accurate Canadian media coverage of Israel, Mr. Coren stated the following to Free Press editors:

“Balfour’s comment was told to me by my old friend Sir Martin Gilbert, the famous historian and fellow of All Souls Oxford. Martin was a close and dear friend and also Churchill’s official biographer and also one of the greatest historians of Israel and also the Holocaust. At the Jewish Museum in London in the 1990s Martin told me that it was ironic that the Balfour Declaration was so vital in forming the modern Jewish state because Balfour, while not anti-Semitic, thought the idea of a country full of Jews was dreadful. He repeated this at my home on a visit to Canada.”

Mr. Coren’s reply was wholly unsatisfactory for the following reasons:

Arthur Balfour and the Balfour Declaration’s legacy deserves to be remembered in history with due accuracy and integrity. To that end, locally, an important organization called Canadians For Balfour 100 (http://www.canadiansforbalfour100.org) is on the vanguard in promoting this historic milestone. Composed of distinguished experts in international law, former diplomats and prominent businesspeople, the organization serves to educate the world about the irrefutable legal rights afforded to the Jewish people that emerged following the issuance of the Balfour Declaration.

According to Richard Bass, a Middle East historian, educator, and author of the book “Israel in World Relations,” the Jewish legal rights to a national home in Palestine was derived from the fact that the Mandate for Palestine incorporated the Balfour Declaration. The Mandate specifically referred to “the historical connections of the Jewish people with Palestine” and to the moral validity of “reconstituting their National Home in that country.” The Mandate’s term “reconstituting,” shows recognition of the fact that Palestine had been the Jews home (a de facto Jewish national home existed at the time the Balfour Declaration was issued, as 90,000 Jews resided in the area of Palestine that was to be Israel). Furthermore, the British were to “use their best endeavors to facilitate” Jewish immigration, to encourage settlement on the land and to “secure” the Jewish National Home. The Mandate itself, and its incorporation of the Balfour Declaration affirmed the 4,000-year connection of the Jewish People to the land of Israel and their right to self-determination. (While the Jews received their rights to self-determination in Palestine, Arabs received those rights in all the remaining territories of the Middle East. Millions of square miles compared to Palestine’s 10,000 square miles.)

The Balfour Declaration and Mandate for Palestine, according to Bass, “… extended one set of rights to Jews in Palestine, and another to non-Jews. Jews were given the right to establish a national home in Israel; Arabs, subsumed under the more general term ‘non-Jews,’ were given only civil and religious rights. In other words, there was a general assumption that all non-Jews, including Arabs, would live as a protected minority within the Jewish national home.” The non-Jewish Arab population did not secure political sovereignty rights.

Despite these facts, Arab protagonists have, since time immemorial, sought to undermine the historical and legal rights of the Jews to the Holy Land. In fact, the Palestinian leadership launched a “Balfour Apology Campaign” which demanded a formal apology from the UK for issuing the Balfour Declaration.

We live in a world where fake news and alternative facts regrettably, is becoming the new norm and where Time Magazine is left asking “Is Truth Dead?”. The journalistic maxim that a news organization lives and dies by the strength of its sources is more important today than it ever was.

Make no mistake, Arthur Balfour supported a Jewish-majority nation state. If alive today, he would revel in this fact and not be repulsed by it.

Mike Fegelman is the Executive Director of HonestReporting Canada, a non-profit organization that ensures fair and accurate Canadian media coverage of Israel.