In an HRC commentary published in the National Post today, HRC points out that the tensions that Jordan has exacerbated with Israel have only served to undermine its long-standing peace treaty with the Jewish state.

Read it in full immediately below or by clicking here. 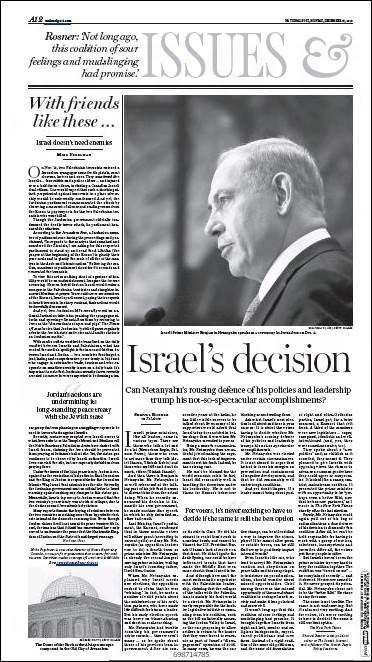 and injured over a half dozen others, including a Canadian-Israeli dual citizen. One would expect that such a shocking attack perpetrated against innocents in a place of worship would be universally condemned. And yet, the Jordanian parliament commemorated the attack by observing a moment of silence and reading verses from the Koran to pay respects for the two Palestinian terrorists who were killed.

Though the Jordanian government officially condemned the deadly terror attack, its parliament honoured the attackers.

According to the Jerusalem Post, a Jordanian member of parliament rose during the proceedings and proclaimed, “In regards to the martyrs that smashed and murdered the Zionists, I am asking for this respected parliament to stand up and read the Al-Fatiha [the prayer at the beginning of the Koran] to glorify their pure souls and to glorify the souls of all the of the martyrs in the Arab and Islamic nation.” Following the motion, members of parliament stood for 60 seconds and venerated the terrorists.

To view this act as nothing short of a gesture of hostility would be an understatement. Imagine the inverse occurring. Heaven forbid that an Israeli would enter a mosque in the Palestinian territories and slaughter innocent Muslims at prayer. You would never see members of the Knesset, Israel’s parliament, paying their respects to Israeli terrorists. In sharp contrast, their actions would be forcefully denounced.

And yet, two Jordanian MPs recently went on national Jordanian television praising the synagogue attacks and spewing vile antisemitism by referring to Jews as the “descendants of apes and pigs.” The Times of Israel notes that Jordanian “public figures regularly rebuke the Jewish state and voice anti-Semitic rhetoric on Jordanian media.”

With media outlets worldwide transfixed on the daily conflict between Israelis and Palestinians, what’s evaded the media’s spotlight is the increased friction between Israel and Jordan — two countries that forged a just, lasting and comprehensive peace treaty in 1994 and who engage in substantive trade, tourism and who co-operate on sensitive security issues on a daily basis. It’s important to note that Jordanian security forces recently arrested 20 men who were suspected to be forming a terror group that was planning on smuggling weapons to be used in terror attacks against Israelis.

Recently, controversy erupted over Israeli access to what Jews refer to as the Temple Mount and Muslims call the Noble Sanctuary. Palestinian Arabs have clashed with Israeli forces, claiming the Jews should be prevented from praying at Judaism’s holiest site. Yet, the status quo continues to be observed by Israeli authorities: Israeli Jews can visit the site, but are expressly forbidden from praying there.

Under the terms of the 1994 peace treaty, Jordan is recognized as the custodian of holy sites in east Jerusalem and the King of Jordan is responsible for the Jerusalem Islamic Waqf trust that administers the site. Recently, the Jordanian government sent an official letter to Israel warning against making any changes to this status quo. Meanwhile, Israel’s top envoy to Jordan warned that the two country’s peace treaty was at risk of collapse, due to the clashes around Jerusalem’s holy shrines.

Many experts dismiss the fraying of relations between the two countries as nothing more than hyperbolic rhetoric intended for domestic consumption. Even though Jordan claims it will not annul its peace treaty with Israel, the tensions that it itself has exacerbated have only served to undermine the peace that the Hashemite Kingdom of Jordan and the State of Israel forged years ago.

Mike Fegelman is executive director of HonestReporting Canada, a non-profit organization that ensures fair and accurate Canadian media coverage of Israel and the Middle East (www.HonestReporting.ca)