On October 23, CBC “Around the World” broadcasted a report by Al Jazeera English correspondent Jacky Rowland, that whitewashed the inmates by describing them as “widely respected fighters against the occupation.” Absent from Ms. Rowland’s report was the fact that many of these prisoners have “blood on their hands,” Israel’s term for terrorists who commit murder against its citizens. (A previous report also on CBC’s “Around the World” by Middle East correspondent Peter Armstrong on April 17, mentioned several times that Palestinians consider prisoners in Israeli custody to be “political prisoners” and “heroes,” but failed to mention that many of the prisoners were held for security offences ranging from membership in “militant” organizations, to planning and carrying out attacks against Israelis.)

On behalf of our over 17,000 members, HonestReporting Canada called on the CBC to balance future reports on Palestinian prisoners by providing necessary context about their terror resumes and rap sheets. Many HonestReporting Canada members also contacted the CBC directly to express their dismay at the lack of context and their dissatisfaction with the public broadcaster.

Upon news that Israel was freeing 441 Palestinian prisoners as a “goodwill gesture” ahead of the Annapolis summit scheduled for today, correspondent Peter Armstrong featured a report on November 19 and inserted the following contextual information about Palestinian prisoners:

Watch Jacky Rowland’s original report and Peter Armstrong’s follow-up report by clicking on the images below.

He then discussed the trauma and divisive nature of this decision and the ramifications it poses on the psyche of the Israeli public:

HonestReporting Canada has also called on the Canadian media and the CBC in the past to responsibly present the security situation in Israel. Specifically we asked that the media not downplay rocket attacks on Israel. Accordingly reporter Armstrong stated: 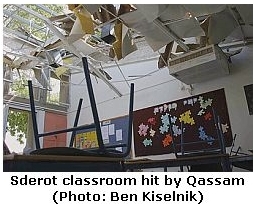 HonestReporting Canada commends the CBC for adding contextual information that enabled viewers to understand the environment of violence and terrorism that Israel faces on a daily basis that inevitably leads to the detention of some of these prisoners, along with necessary counter-terrorism measures.

How You Can Make a Difference:

HonestReporting Canada — the only organization dedicated exclusively to ensuring fair and accurate Canadian media coverage of Israel and the Middle East — needs your support. For the last four years, HRC has depended on the good will and generosity of concerned individuals like you, who help us to combat anti-Israel media bias worldwide. The battle for public opinion is key for Israel, and one in which HRC, working hand-in-hand with informed, committed people like you, is making a difference.