HRC: Behind The Scenes

Since our inception in 2003 as a non-profit organization headquartered in Toronto, HonestReporting Canada (HRC) has been subjecting Canadian news reporting to rigorous and methodical investigations in order to prevent distorted news coverage against Israel. From a modest membership of 4,000 subscribers in 2004, to an impressive 16,000 today, HRC has evolved into a legitimate force empowering ordinary Canadians to respond directly to unfair and inaccurate Canadian media coverage of Israel.

We continue to be vigilant in our efforts to sensitize the media to Israel’s concerns. Many of our successes are largely the result of your combined efforts as keen–eyed media monitors and effective letter writers; however there are also many occasions when we conducted correspondences behind the scenes, in an effort to seek remedy for erroneous news content.

The following are several corrections (on-air, online and in print) that we’ve secured over the past couple months.

The 40th anniversary of the Six Day War generated tremendous news coverage, both domestic and international. We were struck by a particular report on CBC Around the World on June 5, where host Sarika Sehgal stated:

Contrary to this statement, no Palestinian political entity, army or fighting force was defeated during the 1967 war. Therefore, referring to “the Palestinian defeat” is simply inaccurate.

After our complaint, CBC Around the World issued the following On-Air Correction on June 18:

In another report on the historic anniversary this time on the CBC Radio program “World This Weekend” on June 3, host Marcia Williams inaccurately stated (listen here): “It will be 40 years since the Six Day War between Israel and three of its Arab neighbours. In less than a week of fighting in 1967, Israel tripled in size. It captured land in the Golan Heights, the West Bank and Gaza, as well as the Sinai. It also annexed all of Jerusalem.”

Finally on July 12, Canada AM featured a short news brief detailing the pending visit of Jordan’s King Abdullah to Ottawa for a meeting with Prime Minister Stephen Harper. Only host Jennifer Ward introduced the wrong Abdullah as an image of the Saudi King Abdullah was superimposed next to her. HonestReporting Canada brought the error to the attention of the show’s producers who very promptly issued the following correction: “And just a note yesterday we incorrectly showed you a photo of King Abdullah of Saudi Arabia and identified him as the King of Jordan.”

An Indepth: Middle East report on CBC Online incorrectly stated that “Khaled Meshaal, a Palestinian who is on Israel’s most-wanted list and is said to live largely in seclusion in Syria, had a rare face-to-face meeting with Olmert in Egypt back in April.”

Contrary to this statement, the Israeli Prime Minister, Ehud Olmert never met with Meshaal who is the leader of the terrorist organization, Hamas. Meshaal is the mastermind of numerous terrorist attacks and now lives in exile in Damascus. As this CBC report noted: “he is on Israel’s most wanted list.” 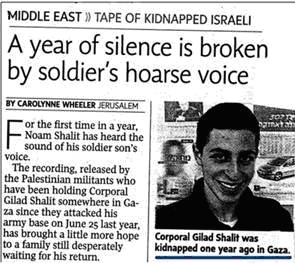 On June 26, the Globe and Mail reported that an audio tape surfaced indicating that kidnapped Israeli soldier Gilad Shalit was still alive. The article carried a photo with the following erroneous caption: “Corporal Gilad Shalit was kidnapped one year ago in Gaza.”

Contrary to this statement, on June 25, 2006, Palestinian terrorists tunnelled from Gaza into Israel proper and attacked an Israeli military base. HRC brought the error to the attention of Globe and Mail editors who issued the following correction:

How You Can Make a Difference:

HonestReporting Canada — the only organization dedicated exclusively to ensuring fair and accurate Canadian media coverage of Israel and the Middle East — needs your support. For the last four years, HRC has depended on the good will and generosity of concerned individuals like you, who help us to combat anti-Israel media bias worldwide. The battle for public opinion is key for Israel, and one in which HRC, working hand-in-hand with informed, committed people like you, is making a difference.