In the National Post today, HRC Executive Director Mike Fegelman goes beyond the news headlines of the emerging nuclear deal with Iran, arguing why Tehran cannot be trusted.

A text version of the op-ed can be found appended below or it can also be read online at the National Post.com: 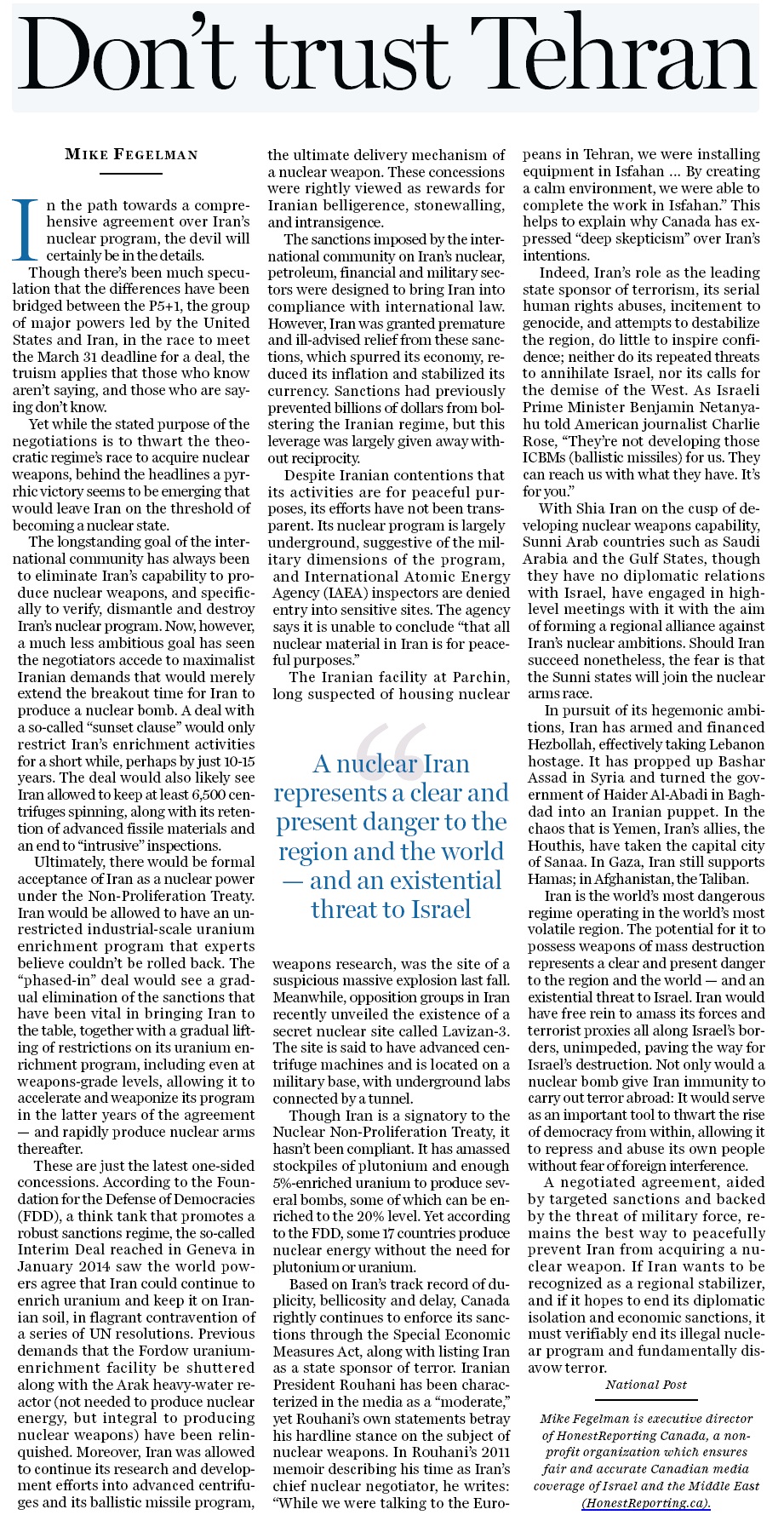 In the path towards a comprehensive agreement over Iran’s nuclear program, the devil will certainly be in the details.

Though there’s been much speculation that the differences have been bridged between the P5+1, the group of major powers led by the United States and Iran, in the race to meet the March 31 deadline for a deal, the truism applies that those who know aren’t saying, and those who are saying don’t know.

Yet while the stated purpose of the negotiations is to thwart the theocratic regime’s race to acquire nuclear weapons, behind the headlines a pyrrhic victory seems to be emerging that would leave Iran on the threshold of becoming a nuclear state.

The longstanding goal of the international community has always been to eliminate Iran’s capability to produce nuclear weapons, and specifically to verify, dismantle and destroy Iran’s nuclear program. Now, however, a much less ambitious goal has seen the negotiators accede to maximalist Iranian demands that would merely extend the breakout time for Iran to produce a nuclear bomb. A deal with a so-called “sunset clause” would only restrict Iran’s enrichment activities for a short while, perhaps by just 10-15 years. The deal would also likely see Iran allowed to keep at least 6,500 centrifuges spinning, along with its retention of advanced fissile materials and an end to “intrusive” inspections.

Ultimately, there would be formal acceptance of Iran as a nuclear power under the Non-Proliferation Treaty. Iran would be allowed to have an unrestricted industrial-scale uranium enrichment program that experts believe couldn’t be rolled back. The “phased-in” deal would see a gradual elimination of the sanctions that have been vital in bringing Iran to the table, together with a gradual lifting of restrictions on its uranium enrichment program, including even at weapons-grade levels, allowing it to accelerate and weaponize its program in the latter years of the agreement — and rapidly produce nuclear arms thereafter.

These are just the latest one-sided concessions. According to the Foundation for the Defense of Democracies (FDD), a think tank that promotes a robust sanctions regime, the so-called Interim Deal reached in Geneva in January 2014 saw the world powers agree that Iran could continue to enrich uranium and keep it on Iranian soil, in flagrant contravention of a series of UN resolutions. Previous demands that the Fordow uranium-enrichment facility be shuttered along with the Arak heavy-water reactor (not needed to produce nuclear energy, but integral to producing nuclear weapons) have been relinquished. Moreover, Iran was allowed to continue its research and development efforts into advanced centrifuges and its ballistic missile program, the ultimate delivery mechanism of a nuclear weapon. These concessions were rightly viewed as rewards for Iranian belligerence, stonewalling, and intransigence.

The sanctions imposed by the international community on Iran’s nuclear, petroleum, financial and military sectors were designed to bring Iran into compliance with international law. However, Iran was granted premature and ill-advised relief from these sanctions, which spurred its economy, reduced its inflation and stabilized its currency. Sanctions had previously prevented billions of dollars from bolstering the Iranian regime, but this leverage was largely given away without reciprocity.

Despite Iranian contentions that its activities are for peaceful purposes, its efforts have not been transparent. Its nuclear program is largely underground, suggestive of the military dimensions of the program, and International Atomic Energy Agency (IAEA) inspectors are denied entry into sensitive sites. The agency says it is unable to conclude “that all nuclear material in Iran is for peaceful purposes.”

The Iranian facility at Parchin, long suspected of housing nuclear weapons research, was the site of a suspicious massive explosion last fall. Meanwhile, opposition groups in Iran recently unveiled the existence of a secret nuclear site called Lavizan-3. The site is said to have advanced centrifuge machines and is located on a military base, with underground labs connected by a tunnel.

Though Iran is a signatory to the Nuclear Non-Proliferation Treaty, it hasn’t been compliant. It has amassed stockpiles of plutonium and enough 5%-enriched uranium to produce several bombs, some of which can be enriched to the 20% level. Yet according to the FDD, some 17 countries produce nuclear energy without the need for plutonium or uranium.

Based on Iran’s track record of duplicity, bellicosity, and delay, Canada rightly continues to enforce its sanctions through the Special Economic Measures Act, along with listing Iran as a state sponsor of terror. Iranian President Rouhani has been characterized in the media as a “moderate,” yet Rouhani’s own statements betray his hardline stance on the subject of nuclear weapons. In Rouhani’s 2011 memoir describing his time as Iran’s chief nuclear negotiator, he writes: “While we were talking to the Europeans in Tehran, we were installing equipment in Isfahan … By creating a calm environment, we were able to complete the work in Isfahan.” These are Iran’s true nuclear intentions and this helps to explain why Canada has expressed “deep skepticism” over Iran’s intentions.

Indeed, Iran’s role as the leading state sponsor of terrorism, its serial human rights abuses, incitement to genocide, and attempts to destabilize the region, do little to inspire confidence; neither do its repeated threats to annihilate Israel, nor its calls for the demise of the West. As Israeli Prime Minister Benjamin Netanyahu told American journalist Charlie Rose, “They’re not developing those ICBMs (ballistic missiles) for us. They can reach us with what they have. It’s for you.”

With Shia Iran on the cusp of developing nuclear weapons capability, Sunni Arab countries such as Saudi Arabia and the Gulf States, though they have no diplomatic relations with Israel, have engaged in high-level meetings with it with the aim of forming a regional alliance against Iran’s nuclear ambitions. Should Iran succeed nonetheless, the fear is that the Sunni states will join the nuclear-arms race.

In pursuit of its hegemonic ambitions, Iran has armed and financed Hezbollah, effectively taking Lebanon hostage. It has propped up Bashar Assad in Syria and turned the government of Haider al-Abadi in Baghdad into an Iranian puppet. In the chaos that is Yemen, Iran’s allies, the Houthis, have taken the capital city of Sanaa. In Gaza, Iran still supports Hamas and destabilizes Afghanistan.

Iran is the world’s most dangerous regime operating in the world’s most volatile region. The potential for it to possess weapons of mass destruction represents a clear and present danger to the region and the world — and an existential threat to Israel. Iran would have free rein to amass its forces and terrorist proxies all along Israel’s borders, unimpeded, paving the way for Israel’s destruction. Not only would a nuclear bomb give Iran immunity to carry out terror abroad: It would serve as an important tool to thwart the rise of democracy from within, allowing it to repress and abuse its own people without fear of foreign interference.

A negotiated agreement, aided by targeted sanctions and backed by the threat of military force, remains the best way to peacefully prevent Iran from acquiring a nuclear weapon. If Iran wants to be recognized as a regional stabilizer, and if it hopes to end its diplomatic isolation and economic sanctions, it must verifiably end its illegal nuclear program and fundamentally disavow terror.

Mike Fegelman is Executive Director of HonestReporting Canada, a non-profit organization which ensures fair and accurate Canadian media coverage of Israel and the Middle East (HonestReporting.ca).