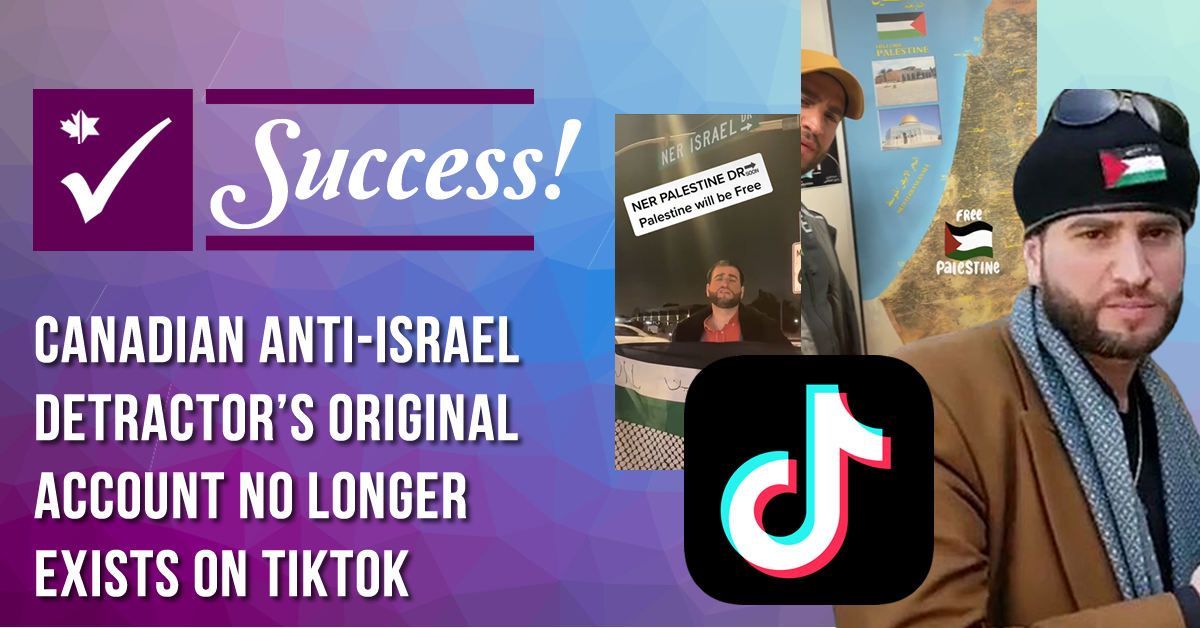 We are pleased to report that with the help of the entire HonestReporting Canada community, the original account from Firas al-Najim, which had a following of over 8,000 people, and which hosted multiple antisemitic videos, no longer exists on TikTok.

In a video entitled: #StopPalestinianHolocaust, al-Najim says that: “On the Holocaust Remembrance Day, we want to talk about the Palestinian Holocaust that is happening every minute and every hour inside the holy occupied land of Palestine that they call Israel.”

He went on to say that : “Jewish Rabbis… say that Zionists are using the Holocaust Remembrance Day to play a victim role so they can occupy Palestine and hurt the Palestinians…“

The description of his video says that: “Antisemitism is a fraudulent card being used & abused by Zionists to justify occupation.”

As it stands, comparing Israeli policies to the Nazis (claiming that Israel is carrying out a “Palestinian Holocaust” I.E. a genocide) meets the IHRA Definition of Antisemitism.

Al-Najim’s call for Israel’s destruction is equally appalling and we regard this as incitement to genocide as he says that “From the river to the sea Palestine will be free.”

We’re also very concerned to see a video he published one week ago showing al-Najim standing in front of Ner Israel Dr. in Thornhill, Ontario, calling for Israel’s destruction. This area of Thornhill is heavily populated with observant Jews and we consider this effort an attempt at intimidating Ontario’s Jewish community. Furthermore, al-Najim’s actions, we consider, fit the IHRA Definition of Antisemitism as he is “holding Jews collectively responsible for actions of the state of Israel.”

In 2019, B’nai Brith Canada said that al-Najim harassed a Jewish senior in a north Toronto park and led an unsuccessful attempt to boycott a Jewish store in Thornhill.

A couple weeks ago, B’nai Brith Canada demanded that a federal non-for-profit corporation, Canadian Defenders for Human Rights (CD4HR), led by Firas al-Najim, be dissolved after it organized a vigil endorsing terrorist groups and calling for death to Canada’s southern neighbour. Al-Najim led a small group gathered in front of the U.S. Consulate in downtown Toronto to mark the death of Qassem Soleimani, the former leader of the IRGC Qods Force, a designated terrorist entity in Canada.

B’nai Brith said that al-Najim delivered an Arabic-language speech at the event, which it translated. Al-Najim promised: “We will continue fighting alongside… Hamas in Palestine and Hezbollah in Lebanon,” before leading the crowd in a highly disturbing chorus of “Death to America!” in both Arabic and Farsi.

HonestReporting Canada encourages you to report al-Najim’s account to TikTok as we feel he has violated its terms and conditions as he engaged in what we regard as hateful conduct, for uttering antisemitic conspiracy theories and for his harassing behaviour against Ontario’s Jewish community.