Why Are Anti-Israel Activists So Afraid of The...
McGill Tribune Publishes Op-Ed Calling for a Boycott...
Ontario Arabic Paper’s Editor Downplays Holocaust; Meshwar Describes...
How the War in Ukraine is Having a...
Toronto Star Columnist Shree Paradkar Wrongly Claims IHRA...
After Vancouver Adopts IHRA, CBC Radio Interviews Fringe...
Qatar Prepares For The 2022 World Cup: Will...
Lawfare: Who is Using the Law More Effectively?...
Official Publication of the College of Physicians and...
French Rapper Accused of Antisemitism; HRC Comments on...
Home Daily Brief How the Qatari Government Helps to Spread Anti-Israel Disinformation on University Campuses: A Fireside Chat with Gregg Roman, Director of The Middle East Forum

How the Qatari Government Helps to Spread Anti-Israel Disinformation on University Campuses: A Fireside Chat with Gregg Roman, Director of The Middle East Forum 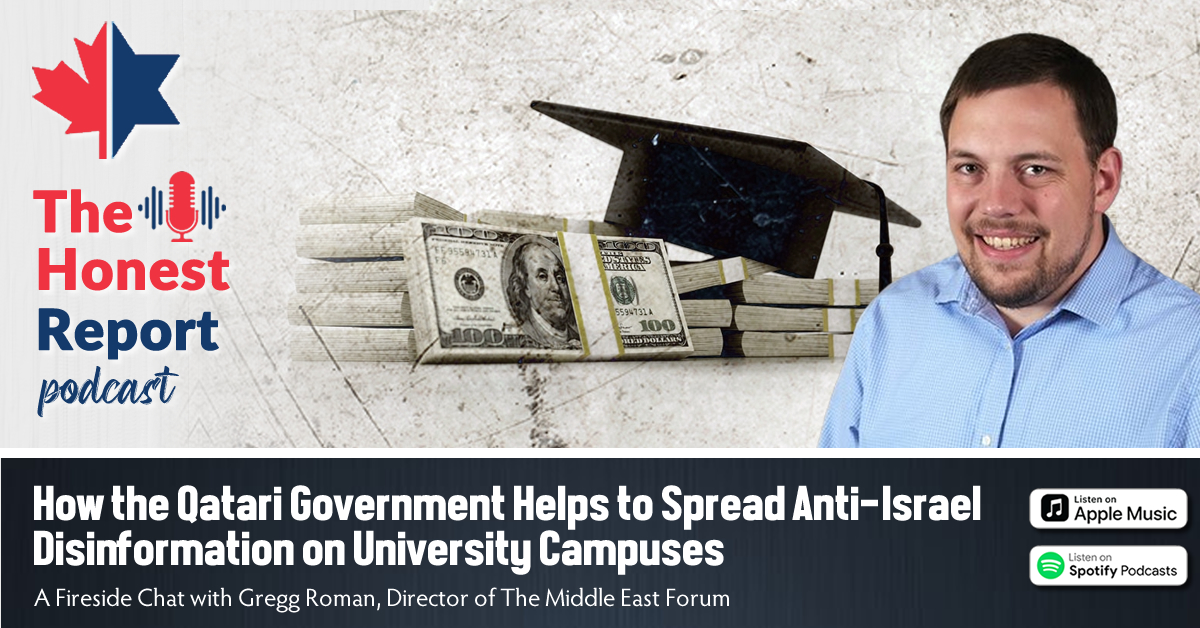 Hamas, the Gaza-based Islamist terrorist group, has been a longtime recipient of funds from the government of Qatar, the oil-rich gulf kingdom.

In fact, Khaled Mashaal, the leader of Hamas, is currently in exile in the kingdom, where he can direct the Islamist group’s actions far from harm.

But the Qatari government’s focus on Israel does not end with funding Hamas; that’s only the tip of the iceberg. The kingdom also invests in Western universities’ Middle Eastern departments, helping spread its ideology into the minds of the next generation on campuses.

In this episode of The Honest Report, we sit down with Gregg Roman, Director of the Middle East Forum, for his thoughts on the Qatari investment in universities and its implications, as well as a new initiative called the Israel Victory Project which seeks to convince anti-Israel actors that seeking to destroy the Jewish State is a hopeless endeavour.