How Hamas and the PA Started the TikTok intifada: HRC In National Post 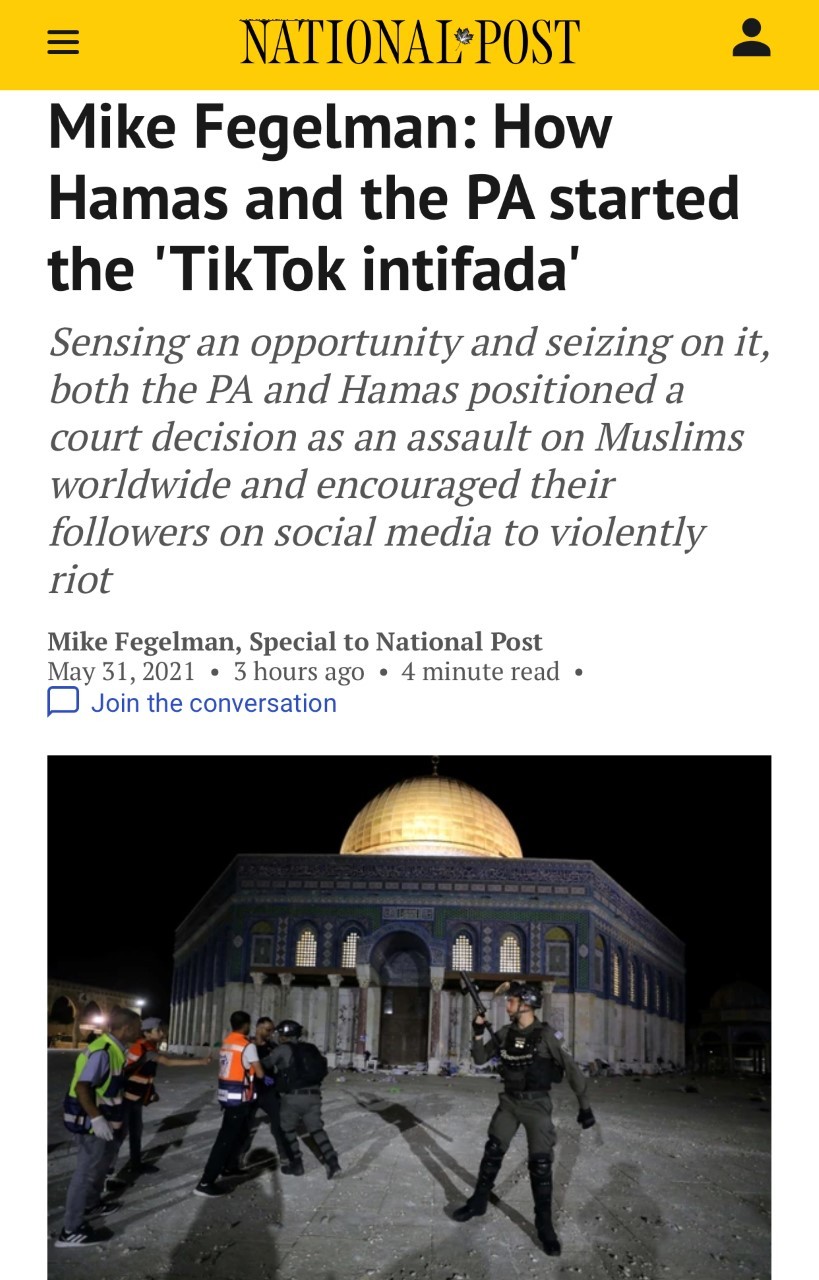 Today, the National Post published an important HRC op-ed where we commented on how Hamas and the Palestinian Authority started the ‘TikTok intifada,’ where they both sensed an opportunity and seized on it, positioning a court decision as an assault on Muslims worldwide and encouraging their followers on social media to violently riot and commit acts of terrorism.

Our commentary can be viewed on the Post’s website by clicking here or as appended below.

After two weeks of hostilities between Israel and Hamas terrorists, the rockets finally stopped and a fragile ceasefire has taken hold. In its wake: death, destruction and trauma.

Despite the suffering endured by innocent civilians on both sides, nothing fundamentally has changed. Both peoples — Israelis and Palestinians—– are here to stay, and if any positive developments are going to take place, it will arguably not be

as a result of armed conflict. What then, needs to change?

The answer to this question bookends both the beginning and the end of this recent round of violence. Before Hamas began indiscriminately firing 4,000-plus rockets at Israeli civilians — while hiding behind Palestinian civilians — tensions increased as the Muslim holy month of Ramadan was winding down.

Contemporaneously, a group of Arab families in the eastern Jerusalem neighbourhood of Shimon HaTzaddik, known in Arabic as Sheikh Jarrah, had been fighting eviction in a longstanding property dispute that was about to be ruled on by Israel’s Supreme Court.

Sensing an opportunity and seizing on it, both the PA and Hamas positioned the court decision as an assault on Muslims worldwide and, once again, encouraged their followers on social media to violently riot. Hence Israel’s claim that a real estate dispute was used to foment discord and incite violence.

And thus, the “TikTok intifada” was born with videos encouraging Palestinians to attack Israelis. And these messages were exported worldwide. Jews were attacked in Los Angeles, New York, Toronto, Montreal and elsewhere. Bloodthirsty lynch mobs roamed the streets trying spark a pogrom of the likes we haven’t seen since Kristallnacht. Unbridled anti-Semitism was on full display.

Before long, young Palestinian men began stockpiling enormous rocks inside the Al-Aqsa Mosque, an odious desecration of Islam’s third-holiest site, in preparation for violence. And when the police rightfully attempted to confiscate those weapons, the rioters began attacking police and Jewish civilians alike.

Both the temporary security measures taken by Israel in Jerusalem, and the court decision regarding the tenants in Sheikh Jarrah, are microcosms of the crux of the conflict: misinformation peddled by the PA and Hamas, abetted by the mainstream and social media, portrayed Israel as a nefarious land thief and its police and soldiers as bellicose.

Except nothing could be further from the truth. Israel is a country that respects the rule of law, has an independent judiciary and arguably the most moral army in the world — one that aborts attacks when civilians are in the area, all while its adversaries target innocents.

But in the heat of conflict, the truth is always the first casualty. Facts like how Israel claims it killed over 200 terrorists were ceremoniously ignored in the media’s casualty counts. Once the rocks and rockets began hurtling through the air, sharing the truth with ordinary Palestinians would simply not be enough to diffuse the situation.

It’s far easier to portray Israel as a criminal land thief than it is to acknowledge that the Israeli-Palestinian conflict is complex and rife with disinformation, with one side preaching peaceful coexistence and another wanting the land of Israel to be Judenrein.

This ceasefire is not a peace agreement, nor is it an acknowledgement of error by Hamas. In fact, quite the opposite. Ismail Haniyeh, a senior Hamas leader, crowed that the violence achieved one key goal: preventing peace with the Jewish state. “We have destroyed the project of coexistence with Israel, of normalization with Israel,” Haniyeh said after the ceasefire took effect.

Haniyeh makes no secret of regularly reiterating Hamas’ ultimate goal, the destruction of Israel, and in the interim, the continued refusal to accept the Jewish state’s right to exist. Sending rockets at Israel and killing civilians in their homes was just a short-term means to that end.

The longer-term goal is to create a moral equivalence between Israel and the Islamist terrorist groups who seek its destruction, ensuring that Israel’s hands are tied in any future conflict, thus preventing it from meaningfully degrading Hamas’ ability to murder Israeli civilians.

This most recent bout of violence, and all the violence preceding it, is driven exclusively by the refusal of Hamas and the PA to accept Israel’s right to exist as a Jewish state. Yet it does not have to be this way.

Israel has, time and time again, made painful concessions for peace and offered generous peace proposals to the Palestinians, who only reciprocated with rejectionism and terrorism. Israel has always extended its hand for peace with the Arab world, which is exemplified by the recently forged peace agreements with the United Arab Emirates, Bahrain, Morocco and Sudan.

The only thing accomplished by acting as if there’s a moral equivalence between Israel and those who seek to destroy it, is to create a feel-good performative exercise that only perpetuates the violent stalemate between Israel and Hamas. This benefits nobody, least of all the Palestinians, whose bloodthirsty and intransigent leadership remains the biggest obstacle to peace.