The Violent Consequences of Anti-Israel Hatred: A Fireside...
Queen Elizabeth & The Jews: A Close Relationship...
Against All Odds: Forging Peace In The Middle...
2022 Third Quarter Impact Report
How Anti-Israel Propaganda Has Proliferated On University Campuses:...
Hill Times Publishes HRC Subscriber’s Letters Who Took...
CBC Ombud Acknowledges Shortcomings Of “Our Montreal” Report...
Hamas Shows Its Real Face By Executing Five...
Success! Radio-Canada Retracts Claim That Israel Killed 49...
Jerusalem: Living Proof of The Jewish People’s 3,000...
Home Daily Brief History Has Shown Us, When Dictators Threaten The Jewish People, You Should Listen – A Fireside Chat with William Daroff, CEO of the Conference of Presidents of Major American Jewish Organizations

History Has Shown Us, When Dictators Threaten The Jewish People, You Should Listen – A Fireside Chat with William Daroff, CEO of the Conference of Presidents of Major American Jewish Organizations 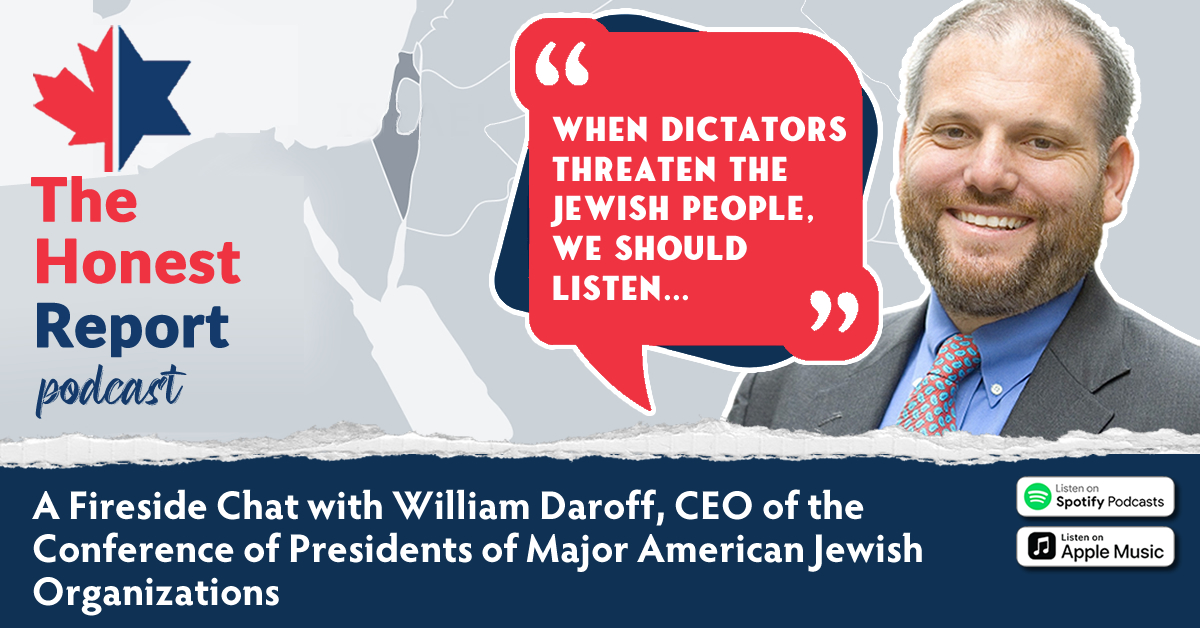 Despite Israel being stronger and more stable than it has ever been, the Middle East nevertheless presents many threats to the Jewish State.

Perhaps the two biggest challenges facing the country today are the Iranian nuclear threat, and the conflict with the Palestinians.

World powers appear close to an agreement with the Islamic Republic of Iran over a new proposed nuclear deal, which, if media reports are accurate, may be no better than the 2015 one as far as Israel is concerned. And as for the peace process, Israel’s peace partner, Mahmoud Abbas of the Palestinian Authority, revealed his true self recently when he refused to condemn the 1972 Munich massacre of Israeli athletes, and instead accused Israel of committing 50 Holocausts.

So what does all this mean for Israel – a country of prosperity and stability, but still facing very real threats?

In this week’s podcast, we sit down with William Daroff, CEO of the Conference of Presidents of Major American Jewish Organizations, a Washington, DC-based umbrella organization representing many smaller Jewish groups. Daroff is a widely regarded commentator on Israeli affairs.