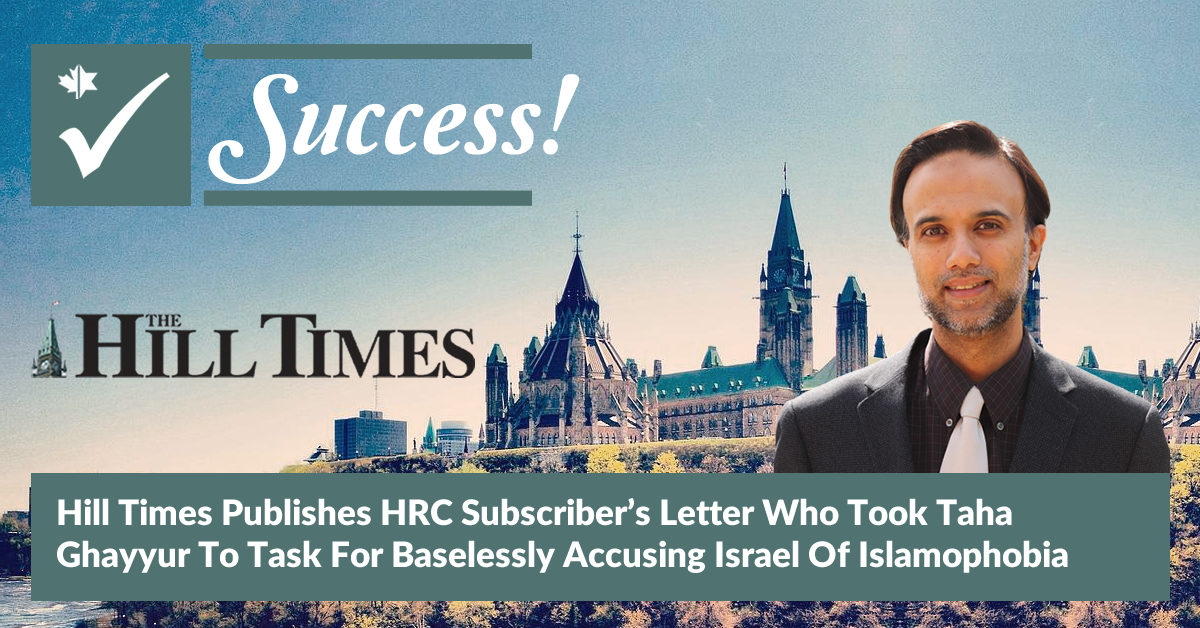 
On September 21 and 26, The Hill Times published letters from two HRC subscribers who took Taha Ghayyur to task for baselessly accusing Israel of Islamophobia:

Re: “Canada’s foreign policy is at odds with Trudeau’s promise to fight Islamophobia,” (The Hill Times, Sept. 7). Your commentators are among the most important and influential in Canada.

For this reason, it is crucial that they hold themselves to real and highest journalistic standards, unlike the recent article by Taha Ghayyur, which baselessly accuses Israel supporters of Islamophobia. This is nonsense.

Israel supporters base their support and love of Israel on the need of the Jews to have a national space of their own, rather than live in exile at the mercy of all the nations—is it a revolutionary idea? Over the last hundred years, half of the Jewish people have returned to the spaces of their ancient homeland. This accomplishment ought to be celebrated and honoured. It is a tale of an Indigenous people who actually made their way back—an astonishing feat in human history. There, they joined a second set of Indigenous people, local Arabs, and to a great extent, together they have created a vibrant and good society within Israel proper.

To be sure, there are many glitches in the system, especially across the border where Israel proper gets entangled with Palestinian autonomy. And to be sure, it will take another 100 years to fix these problems. But we hope to fix them in a way that will give each of the peoples in this region its own honour and rights.Please help us in this endeavour.

Re: “Canada’s foreign policy is at odds with Trudeau’s promise to fight Islamophobia,” (The Hill Times, Sept. 7).

Providing space forTaha Ghayyur to spread biased, inaccurate information is a disservice to the community and reflects poorly on your editorial decision-making.

No wonder people’s trust in the media continues to plummet.

Shame on The Hill Times. 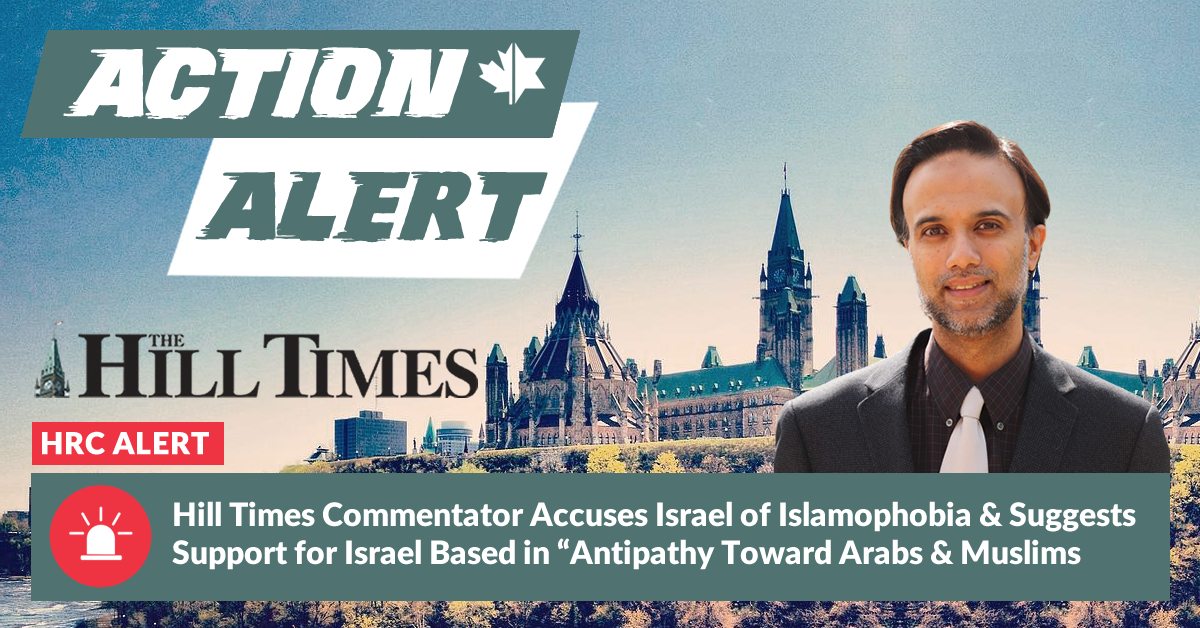 In his recent September 12 opinion column in The Hill Times, “Canada’s foreign policy is at odds with Trudeau’s promise to fight Islamophobia,” Taha Ghayyur praises Prime Minister Trudeau’s opposition to anti-Muslim hate crimes in Canada, but argues that the Canadian government has “remained silent on the international stage in condemning Islamophobia around the world.”

Ghayyur accuses the Canadian government of being complicit in alleged crimes against Muslims, including in Israel, which he accuses of being “defined by decades of occupation and settler colonialism.”

Claiming that Israel’s alleged crimes against the Palestinians are a symptom of anti-Muslim discrimination, Ghayyur, therefore, takes issue with the Trudeau government’s support for trade with Israel, in particular the Canada-Israel Free Trade Agreement.

There is simply no evidence to buttress Ghayyur’s statement that Israel is imbued with Islamophobia.

Muslims in Israel can vote, be elected, live wherever they want, and pursue any educational and workplace opportunities they so choose. And the Muslim population in Israel is growing at a rapid pace, jumping on average of two percent per year.

In fact, the Muslim population of Israel has jumped about 10-fold since the country’s independence in 1948. Today, there are over 400 mosques in Israel, including well over 70 just in Jerusalem. Islam in Israel is far from persecuted; it is recognized and a protected part of Israeli society, with hundreds of imams receiving their salaries from the Israeli government, and the Israeli government even funds many Islamic schools throughout the country. In sharp contrast, much of the Arab and Muslim world has been ethnically cleansed of its Jewish populations, rendering the region largely “Judenrein” (Jew-free).

Bizarrely, nowhere in his opinion column does Ghayyur articulate Israel’s alleged crimes which he defines Islamophobic, but he nevertheless states that “growing global indifference to the plight of the Palestinians can be attributed to antipathy towards Arabs and Islam.”

If this is the case, clearly this factoid is complete news to the rest of the Arab world, which is increasingly embracing Israel, a far cry from its erstwhile hostility only a few decades ago.

In recent years, a growing number of Arab and Islamic-majority states have established and re-established diplomatic ties with Israel, including Morocco, Sudan, Kosovo, Bahrain, and the United Arab Emirates (UAE). Even Saudi Arabia, home to the two holiest sites in Islam, is moving towards warmer relations with the Jewish State.

Presumably, these countries do not see Israel as being an Islamophobic state, or one would imagine they would not be establishing and expanding ties with the country. In fact, the exact opposite is the case: Israel is home to about two million Arabs, mostly Muslims but with a large Christian minority, who enjoy full civil and democratic rights within the Jewish-majority country.

Ghayyur does more than accuse Israel of Islamophobia; his claim that the country is defined by occupation and “settler colonialism” is a figment of his imagination.

In 1948, Israel gained its independence from the United Kingdom, and the Jewish People achieved self-determination in their own homeland for the first time in nearly two thousand years. Almost immediately, the country was invaded by neighbouring Arab states, intent on destroying it.

While these Arab states failed to destroy Israel, Jordan succeeded by illegally occupying the city of Jerusalem, which was declared an international zone by the United Nations as part of its Mandate for Palestine. During this time, Jordan mercilessly destroyed vestiges of Jewish history and desecrated ancient Jewish historical sites in the city. Jordan also invaded Judea & Samaria, ancient Jewish lands today called the West Bank.

Barely 19 years later, in 1967, Syria, Egypt, and Jordan once again attempted to destroy Israel, but the Jewish State managed to survive thanks only to a pre-emptive strike against Egypt and Syria, whose armies had mobilized against the tiny Jewish State.

In only six days, Israel managed to capture its historic lands once again, including Jerusalem and Judea, and Samaria, where the Jewish People had lived continuously for three thousand years.

It is these lands which Ghayyur boldly proclaims are somehow occupied by Israel. These lands were never part of any Palestinian state – which has never previously existed – and therefore under no legal understanding can be seen as owned by such an entity.

As for the claim that Israel is somehow a settler colonialist endeavor, such a statement is a bold falsehood against not merely the modern State of Israel, but the entire Jewish People, whose entire ancient history was founded in the Land of Israel three millennia ago. By portraying Israel as a modern-day colonialist enterprise, Ghayyur serves to all but erase Jewish history since the very beginning.

Today, the Middle East is hardly a region featuring widespread civil liberties for anyone, least of all religious minorities. But tiny Israel, imperfect as it may be, nevertheless is a model of tolerance, diversity, and acceptance. To characterize it as anything resembling Islamophobia is simply preposterous.