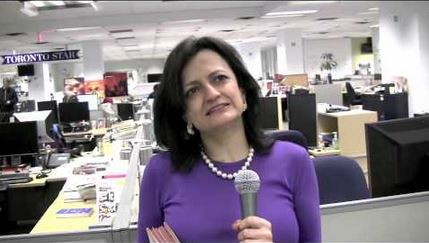 Toronto Star columnist Heather Mallick acknowledges that her July 16 column entitled “Gaza? That’s history stamping its foot” will “offend many” and she is absolutely correct.

Firstly, to imply that Israel is intentionally targeting innocent Palestinians, specifically children and disabled people, is inflammatory and without merit. Israel is targeting only Hamas terrorists, it’s weaponry and infrastructure in the Gaza Strip. Sadly, Hamas embeds themselves amongst innocents in mosques, hospitals, schools etc. turning civilian areas into military installations. It’s said that Israel uses its weapons to protect its civilians while Hamas uses its civilians to protect its weapons.

Israel takes every effort to reduce civilian casualties, such as calling and texting civilians to warn of impending attacks, dropping leaflets, and aborting air strikes when civilians are in the vicinity. Hamas, on the other hand, indiscriminately fires on civilians while using Gazans as human shields in double war crimes that violate the Geneva Conventions.

As intrepid Canadian blogger Richard Klagsbrun observed: “According to The Toronto Star’s Heather Mallick, if Israel doesn’t allow Hamas to bomb their civilian population with impunity, they’re just like the Nazis.” It should be noted that comparisons of contemporary Israeli policy and actions to that of the Nazis fits the European Union’s, U.S. State Department’s, and Canada’s Ottawa Protocol’s working definition of antisemitism.

To claim as Mallick does that “… years from now civilians in the West will be slaughtered by terrorists taking revenge for the Gaza bombings” is to suggest that Israeli self defence actions only encourage terror and put innocents in the West, meaning Canada and the US, at risk. Such arguments are not only offensive, but are repugnant and not worthy of publication. By deduction, for Canada to be safe, support for Israel should be withdrawn.

While Mallick has the right to offend, you have the right to rebuke her commentary by sending letters to the Toronto Star. Please write to: lettertoed@thestar.ca