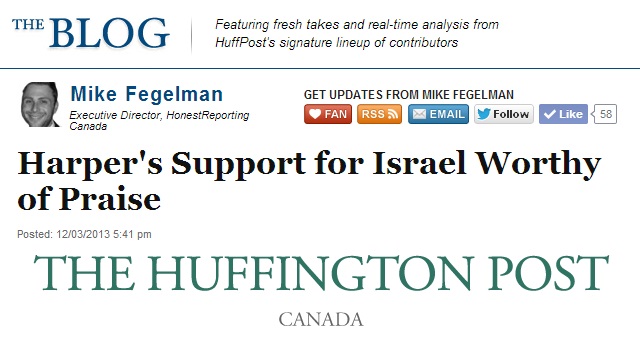 Prime Minister Stephen Harper’s support for Israel is worthy of praise, not selective opprobrium by Josh Scheinert. Under Harper’s administration, Canada has chosen principle over political expediency in its stalwart support for the Jewish state. Whether at the UN, the Francophonie, in domestic and international audiences and in foreign policy circles, Canada’s support for the only liberal democracy in the Middle East makes sense and is based on shared values.

And yet, Josh D. Scheinert has the temerity to claim that “Stephen Harper is not an outstanding supporter of the State of Israel.”

To wit, as Minister Jason Kenney put it recently: “Prime Minister Harper was the first world leader in March of 2006 to announce an ending of all Canadian aid to the Palestinian Authority following the election of Hamas, in the PA elections in 2006. This is why Canada was almost alone in the civilized world in standing with Israel in July and August of 2006, following similar provocative rocket attacks from Hezbollah in southern Lebanon. It is why Prime Minister Harper stood up to Jacques Chirac and dozens of world leaders at the Francophonie Summit in October of 2006, who sought yet again to adopt a resolution scape-goating the Jewish state for defending its civilians. It’s why again and again, this Prime Minister and our Conservative government have taken these strong and principled actions, because recognizing the right of the Jewish people to their homeland and their right of that homeland to self-defense is fundamentally in-sync with Canada’s democratic values. It’s also in-sync with our interests because as our Prime Minister has said, those who seek to eliminate the Jewish people, ultimately, if allowed to, would seek to eliminate all of us.”

Apart from the sterling examples of support listed above, here are just a few other examples displaying why Harper’s continued efforts justify the Jewish National Fund’s honouring of this sitting Canadian prime minister:

Finally, contrary to Mr. Scheinert, Canada did not, nor does it now, oppose Palestinian statehood. Instead, the Canadian government opposed the means to which the Palestinian Authority was trying to procure an elevated upgrade in status at the UN through unilateral methods. The long standing belief and policy of the Canadian government is that a just resolution of the conflict can only occur through direct negotiations between Israelis and Palestinians without preconditions. Canada’s decision to oppose the Palestinian Authority’s unilateral gambit was in the best interests of finding a peaceful resolution to the conflict. After all, the PA’s effort stood in flagrant violation of the Oslo accords.

Like the pot calling the kettle black, Mr. Sheinert is especially “vindictive” for contending that Harper’s support for Israel is only to court Canada’s Jewish vote in “wedge” politics . But as is commonly understood, there are more votes in being anti-Israel, than pro.

To mark Israel’s 65th anniversary this year, Harper said the following of interest:

“Israel, like Canada, is a great nation, and like Canada, Israel serves as a beacon of hope in an uncertain world. That is because it has as its foundation the universal values that our two countries share; freedom, democracy, human rights and the rule of law.

However, unlike Canada, Israel remains threatened by groups and regimes that deny its very right to exist. And yet, through centuries of struggle, the descendants of Abraham, Isaac and Jacob have endured. And endure they must, for the consequences of failure are great and far reaching. If one free and democratic society is threatened, all are at risk.

Indeed, a closer look at the Canada-Israel relationship reveals that Canada has exercised moral clarity by standing up to double standards, dictators, and outright hypocrisy. Canada, under Stephen Harper’s administration has confronted terror, upheld international law, and promoted peace between Israelis, Palestinians and the region as a whole.

Standing up to moral bankruptcy is not a mark of shame on Canada, but of moral leadership. That is why Stephen Harper is being commendably recognized as an outstanding supporter of the State of Israel.