Today, the Hamilton Spectator published an op-ed by a leader of the Neturei Karta, a radical Jewish anti-Zionist sect, well on the peripheries of society, that called 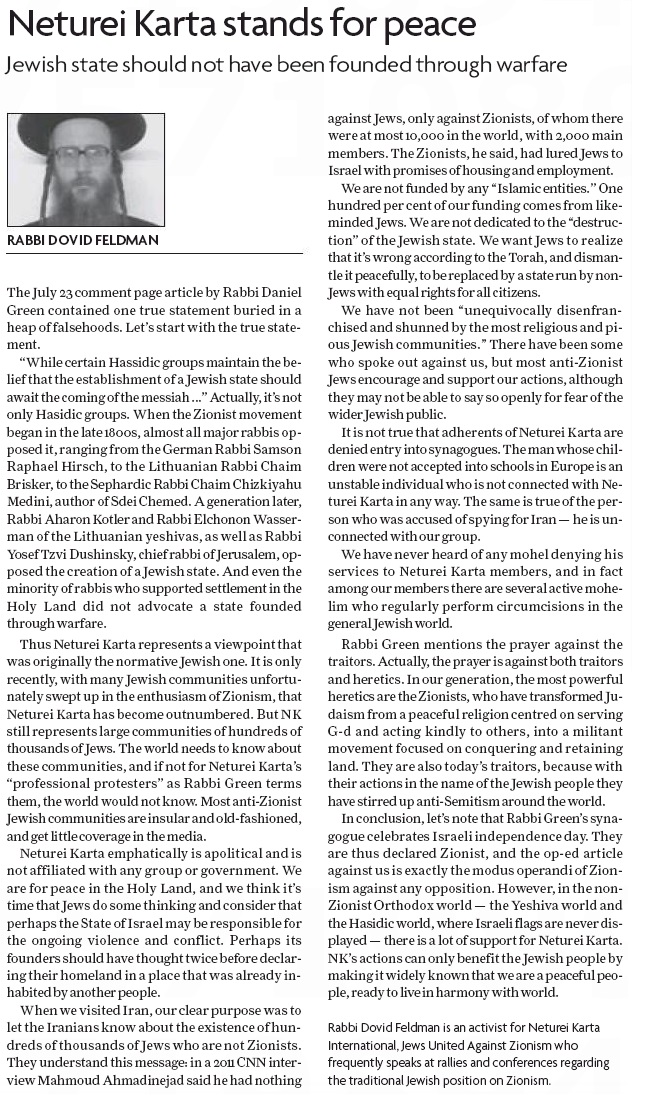 for Israel to be “dismantled” and “replaced”.

That such a commentary was deemed worthy of publication by Spectator editors is alarming. The op-ed was written by Rabbi Dovid Feldman in response to a commentary published weeks prior by Rabbi Daniel Green of the Adas Israel Congregation of Hamilton on July 23, who in part said the following about the Neturei Karta: “The group, founded in 1938 and funded in part by various Islamic entities, is dedicated to the destruction of the Jewish state. Its members are part of a cadre of professional anti-Zionist protesters that travel worldwide to various anti-Israel rallies — Hamilton being one of its more recent stops. While the number of adherents is sometimes estimated to be in the thousands, in reality it may total no more than several hundred.”

In response to Green’s commentary, the Spectator published a screed by Rabbi Dovid Feldman of this extremist group saying Israel should be dismantled and “be replaced by a state run by non-Jews with equal rights for all citizens.”

The Neturei Karta are an exceedingly fringe element in the Jewish community, wholly unrepresentative of Judaism, and they have been ostracized for attending Iran’s Holocaust denial conference, for shaking hands with former Iranian President Ahmadinejad who calls for Israel’s destruction, and for aligning itself with extremist Islamist organizations and terror groups like Hamas and Hezbollah. Neturei Karta members have also been jailed for spying for Iran.

The Neturei Karta claims to oppose the existence of the State of Israel based on the assumption that it’s sacrilegious to have an independent Jewish state prior to the coming of the Jewish Messiah.

According to the Anti Defamation League (ADL), the Neturei Karta is founded on the idea that Zionism is a demonic force responsible for many of the world’s evils. The Neturei Karta claims they pray for Israel’s destruction ‘in peaceful ways’.

The ADL notes that the Neturei Karta has developed several conspiracy theories to explain the success of Zionism and its own lack of influence; these theories often echo the slanders emanating from radical Islamic groups and New World Order conspiracists. The movement is also very conservative on social issues, and quick to blame Zionists for the moral decline it perceives in modern society. It claims that:

That a mainstream newspaper considered a commentary calling for Israel’s demise to be worthy and fit for publication is beyond the pale. The Spectator will likely claim they procured a balance of opinion by giving the Neturei Karta spokesperson a right of reply, but would the Spectator publish a commentary calling for the dismantling of Canada or the United States? Likely not. Such commentaries, are inflammatory and run the risk of incitement and fanning the flames of hatred.

Please contact the Hamilton Spectator and register your concerns with how they gave a platform to a commentary calling for Israel’s destruction. Send letters to: letters@thespec.com