Hamilton Aboard in the Fight Against Antisemitism; HRC Asserts in Hamilton Spectator Op-Ed

The City of Hamilton’s recent decision to adopt the IHRA Definition of Antisemitism is a historic step taken, and one which could have a positive, domino effect of spurring on similar action by other levels of government across Canada.

In an op-ed published today in the Hamilton Spectator, HRC commends the City of Hamilton for adopting IHRA. 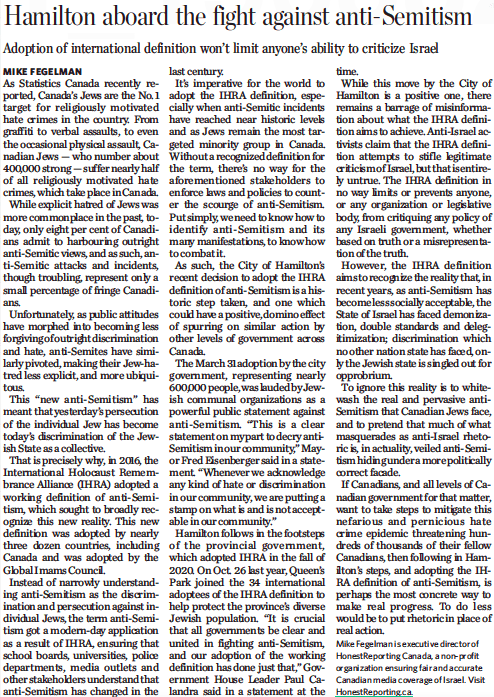 While explicit hatred of Jews was more commonplace in the past, today only eight percent of Canadians admit to harbouring outright antisemitic views, and as such, antisemitic attacks and incidents, though troubling, represent only a small percentage of fringe Canadians. Unfortunately, as public attitudes have morphed into becoming less forgiving of outright discrimination and hate, antisemites have similarly pivoted, making their Jew-hatred less explicit, and more ubiquitous. This “new antisemitism” has meant that yesterday’s persecution of the individual Jew has become today’s discrimination of the Jewish State as a collective.

That is precisely why, in 2016, the International Holocaust Remembrance Alliance (IHRA) adopted a Working Definition of Antisemitism which sought to broadly recognize this new reality. This new definition was adopted by nearly three dozen countries, including Canada and was adopted by the Global Imams Council. Instead of narrowly understanding antisemitism as the discrimination and persecution against individual Jews, the term antisemitism got a modern-day application as a result of IHRA, ensuring that school boards, universities, police departments, media outlets and other stakeholders understand that antisemitism has changed in the last century.

It’s imperative for the world to adopt the IHRA definition especially when antisemitic incidents have reached near historic levels and as Jews remain the most targeted minority group in Canada. Without a recognized definition for the term, there’s no way for the aforementioned stakeholders to enforce laws and policies to counter the scourge of antisemitism. Put simply, we need to know how to identify antisemitism and its many manifestations, to know how to combat it.

As such, the City of Hamilton’s recent decision to adopt the IHRA definition of antisemitism is an historic step taken, and one which could have a positive, domino effect of spurring on similar action by other levels of government across Canada. 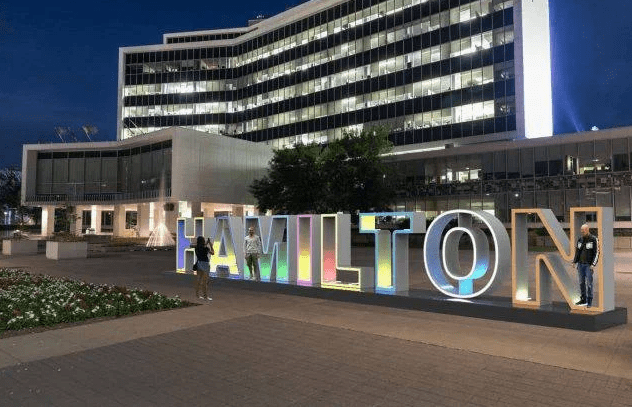 The March 31 adoption by the city government, representing nearly 600,000 people, was lauded by Jewish communal organizations as a powerful public statement against antisemitism. “This is a clear statement on my part to decry antisemitism in our community,” Mayor Fred Eisenberger said in a statement: “Whenever we acknowledge any kind of hate or discrimination in our community we are putting a stamp on what is and is not acceptable in our community.”

Hamilton follows in the footsteps of the provincial government, which adopted IHRA in the fall of 2020. On October 26 last year, Queen’s Park joined the 34 international adoptees of the IHRA definition to help protect the province’s diverse Jewish population. “It is crucial that all governments be clear and united in fighting antisemitism, and our adoption of the working definition has done just that,” Government House Leader Paul Calandra said in a statement at the time.

While this move by the city of Hamilton is a positive one, there remains a barrage of misinformation about what the IHRA definition aims to achieve. Anti-Israel activists claim that the IHRA definition attempts to stifle legitimate criticism of Israel, but that is entirely untrue. The IHRA definition in no way limits or prevents anyone, or any organization or legislative body, from critiquing any policy of any Israeli government, whether based on truth or a misrepresentation of the truth.

However, the IHRA definition aims to recognize the reality that, in recent years, as antisemitism has become less socially acceptable, the State of Israel has faced demonization, double standards, and de-legitimization; discrimination which no other nation state has faced, only the Jewish state is singled out for opprobrium.

To ignore this reality is to whitewash the real and pervasive antisemitism that Canadian Jews face, and to pretend that much of what masquerades as anti-Israel rhetoric is, in actuality, veiled antisemitism hiding under a more politically correct facade.

If Canadians, and all levels of Canadian government for that matter, want to take steps to mitigate this nefarious and pernicious hate crime epidemic threatening hundreds of thousands of their fellow Canadians, then following in Hamilton’s steps, and adopting the IHRA definition of antisemitism, is perhaps the most concrete way to make real progress. To do less would be to put rhetoric in place of real action.