On February 25, the Globe and Mail published a brief “Moment in Time” by its Mideast correspondent Patrick Martin which was featured on the backside of the front page. It was entitled the “Mass Killing of Palestinians at Prayer in Hebron” and it can be read in full immediately below: 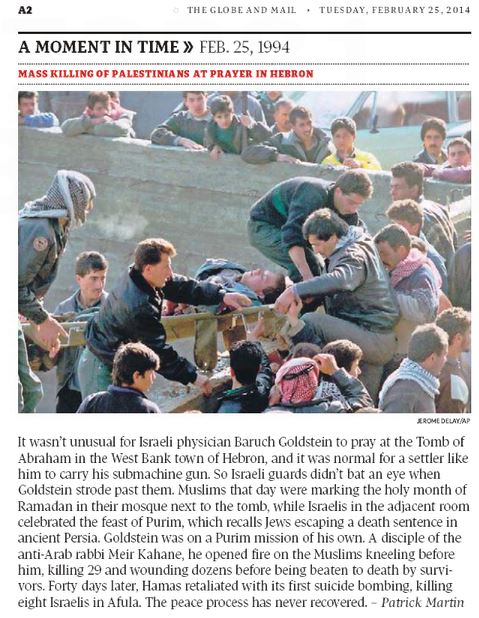 CAMERA (the Committee for Accuracy in Middle East Reporting in America) features the following list of suicide bombing attacks carried out by Hamas in 1993:

The Agenda also notes the following in a reference to an interview with Globe reporter Patrick Martin: “I was 10 years old when Hamas began suicide bombing operations in 1993 in the West Bank.”

On February 28, we asked the Globe to correct Martin’s erroneous claim. On March 4, the following clarification was issued: 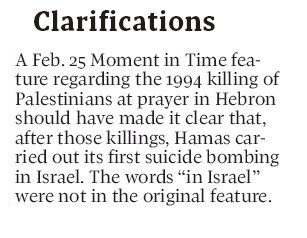 Again, the Globe missed another opportunity to tell its readers that Hamas’ decision to carry out suicide attacks preceded the Goldstein Attack in 1994. Regrettably, Globe readers continue to be mislead into thinking that the Goldstein attack caused Hamas to adopt the terror tactic of suicide bombing.