Israel Is An Imperfect Country, But A Vibrant...
Why Are Anti-Israel Activists So Afraid of The...
McGill Tribune Publishes Op-Ed Calling for a Boycott...
Ontario Arabic Paper’s Editor Downplays Holocaust; Meshwar Describes...
How the War in Ukraine is Having a...
Toronto Star Columnist Shree Paradkar Wrongly Claims IHRA...
After Vancouver Adopts IHRA, CBC Radio Interviews Fringe...
Qatar Prepares For The 2022 World Cup: Will...
Lawfare: Who is Using the Law More Effectively?...
Official Publication of the College of Physicians and...
Home Daily Brief Growing Antisemitism at McGill Strikes at the Core of Jewish Identity

Growing Antisemitism at McGill Strikes at the Core of Jewish Identity 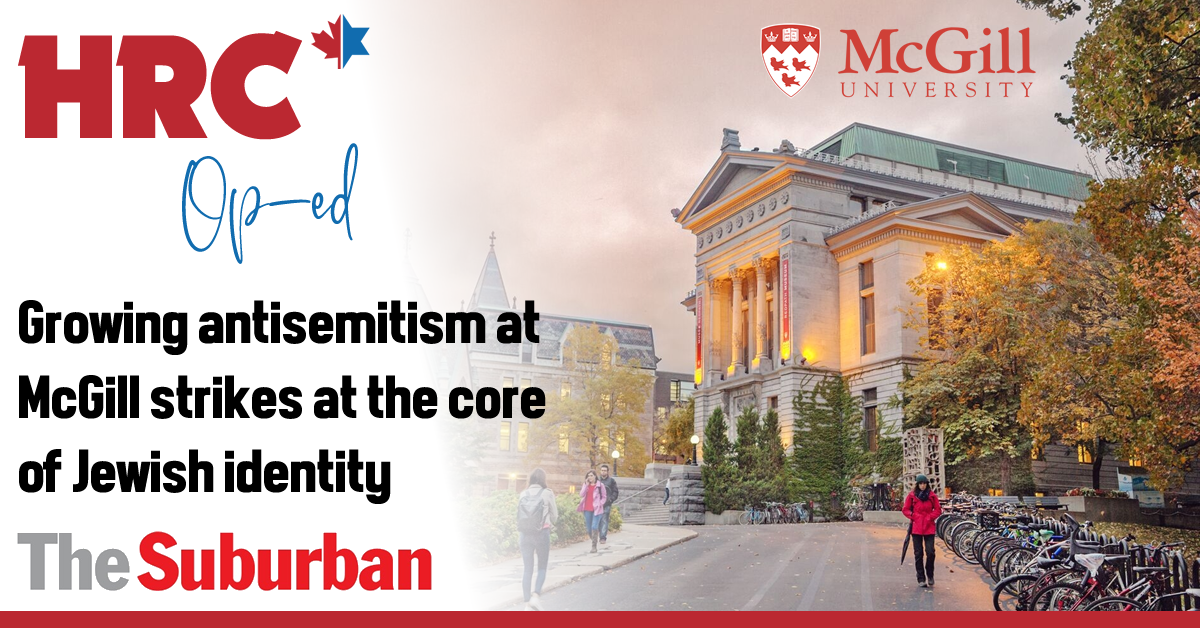 This Op-ed was published in The Suburban Newspaper on Wednesday, April 20, 2022

Growing antisemitism at McGill University culminated recently in the Student Society of McGill University (SSMU) passing a referendum item entitled the “Palestine Solidarity Policy.” This policy was celebrated by the McGill Daily, which in recent years has committed to an “explicitly pro-Palestine stance” denying freedom of expression of Jewish and pro-Israel people on campus.

The Daily published a litany of antisemitic articles demonizing, delegitimizing, and defaming Israel and the Jewish people under the false guise of social justice and human rights activism for the Palestinian people. Importantly, their actions and words should not be misconstrued as a form of political protest but rather as an attempt to pervert social justice ideology to disenfranchise Jewish students of the spiritual centre of their ethnocultural identity, which, for the vast majority of Jews, is Israel. Contrary to the SSMU and Daily’s stance, one can support efforts for Palestinian self-determination without calling for the destruction of Israel and promoting hatred of Jewish people.

The SSMU referendum in which 16% of the student population voted and 71% of that minority supported the “Palestine Solidarity Policy” calls for among other things the boycott, divestment, and sanctioning (BDS) of “institutions or corporations complicit in an entrenched system of settler-colonial apartheid against Palestinians.” Israel is never named explicitly in the policy presumably as an additional way to erase the existence of the ancestral, spiritual, and indigenous homeland of the Jewish people. The policy further obligates SSMU to make “at least one public statement each semester, including a statement on ‘Nakba Day,’ reaffirming the SSMU’s solidarity with Palestinian students and with Palestinian liberation from settler-colonial apartheid.”

Essentially, calling for a relentless campaign against Israel in which pro-Israel voices will be silenced. By labeling Israel as a “settler-colonial apartheid” state, SSMU is committing an egregious act of discrimination. This accusation is a perversion of the social justice movement intended to vilify the only majority Jewish state in the world and deny the historic and ongoing connection of Jews to Israel. Moreover, the accusation is absurd when even the most perfunctory examination of the facts reveals Israel to be a pluralistic democracy such that Arabs, Jews, and others are afforded full equal rights under the law. Furthermore, ignoring the violence committed by Hamas against Jews and promoting falsehoods about Israel and Jews is reprehensible and leads to increased hatred against Jews who are the group that is victims of the highest number of hate crimes per capita in Canada.

In concert with SSMU, the McGill Daily pushed an agenda of hatred against Israel promoting BDS, which seeks to silence the academic freedom of scholars and students at Israeli institutions including Palestinian Arabs. The Daily has also published antisemitic content including claims that “Zionism is part of racism” ignoring the diversity of Israeli society and the protection of all people, Jews and Arabs alike, under the law. The Daily also published a commentary by an anti-Israel activist saying that McGill “bowed to Zionist pressure” for fear of not “disappoint(ing) the Zionist lobby,” statements that conjure an age-old antisemitic trope that a powerful cabal of Jews control the world. Furthermore, the Daily has a committed partnership with an anti-Israel campus organization, Solidarity for Palestinian Human Rights McGill, which helped create its content, and supported their anti-Israel advocacy campaigns. The Daily has also refused to “publish work that includes the characterization of some forms of Palestinian resistance as terrorism or extremism” consistent with an “anti-normalization” stance that denies pro-Israel students and faculty their freedom of expression. The actions of the McGill Daily violate the norms of journalistic integrity as well as their obligations under the Quebec Press Council to which they are accountable.

McGill University leadership recently struck a committee to study antisemitism on campus. They also issued a strong letter of condemnation of the SSMU policy as well as an ultimatum to revoke their funding if the policy is not reversed. These are all steps in the right direction. However, further action must be taken now. McGill leadership must draw a bright line between hate speech and freedom of expression. They must recognize that a core tenet of Jewish identity for most Jews is built around their connection to Israel. McGill must acknowledge that the vilification and delegitimization of Israel increase attacks against Jewish people. McGill’s failure to act in the past has emboldened detractors, exposing Montreal’s Jewish community to discrimination and hatred. McGill has a duty to protect all minorities on campus including Jewish students, faculty, and staff. They need to show courage in the face of hatred and terminate the Memorandum of Agreement with the McGill Daily stripping the good name of McGill from the paper’s imprimatur as well as revoking the status and funding of the SSMU until their antisemitic policy is revoked.

Source: Growing Antisemitism at McGill Strikes at the Core of Jewish Identity