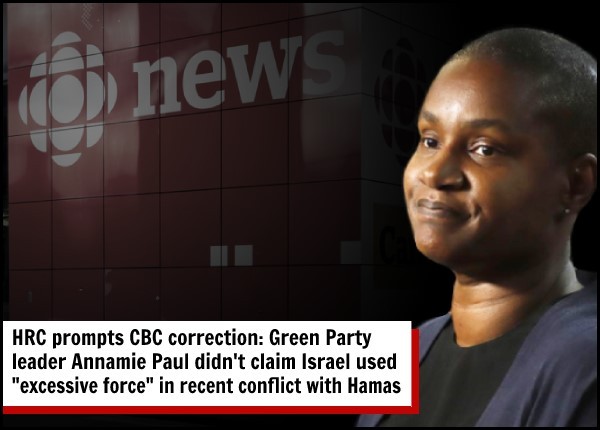 So it was not a surprise to see the CBC make this claim recently. What was surprising, however, is that the CBC falsely claimed that Green Party Leader Annamie Paul had issued a statement saying that Israel used “excessive force” in its 11-day conflict against Hamas terrorists. Of course, there’s no factual basis to this claim as Annamie Paul never uttered these words.

As violence in the region escalated, Paul issued a statement calling for a ceasefire and condemning both Palestinian rocket attacks and excessive Israeli military force, an apparent attempt to put forward a moderate position close to that of the Trudeau government.”

A subsequent CBC report on July 18 repeated this false claim in a timeline documenting the crisis within the Green Party:

May 10, 2021: As fighting raged between Israel and Palestinian militants in Gaza, Paul issues a statement calling for a ceasefire and condemning both Palestinian rocket attacks and what appeared to be excessive Israeli military force. Green Party MP Jenica Atwin of Fredericton called the statement “totally inadequate,” adding “End Apartheid.””

In fact, Annamie Paul’s May 10 statement on the Israel-Hamas conflict only said the following:

Responding to the alarming escalation of violent clashes, and associated deaths in Israel and Gaza, the Green Party of Canada calls for an immediate de-escalation in the violence and a return to dialogue as a means to seeking a peaceful solution.

The dangerous situation that is unfolding is extremely disturbing,” said Green Party Leader Annamie Paul. “Violence and confrontation will not bring resolution, only more suffering. We urge restraint and call on those in positions of authority to do all in their power to prevent further injury or loss of life.”

The Green Party of Canada is committed to a just and lasting peace in the Middle East. This requires steps to end the violence in favour of engagement in peaceful, inclusive dialogue as the preferred means of resolving the current situation and of achieving sustainable peace.”

As you can see, at no time did Ms. Paul condemn Israel for its use of force, nor did she in anyway characterize the conduct of the Israel Defense Forces as having employed “excessive force,” this was CBC reporter David Thurnton’s opinion disguised as news. In truth, Ms. Paul didn’t directly condemn the Palestinian rocket attacks either, she merely called for a “de-escalation” of “violent clashes.”

In light of this serious error which prominently appeared in two CBC reports, HonestReporting Canada liaised directly with senior CBC executives who, to their credit, immediately issued the following correction to their reports:

We thank the CBC for taking these corrective actions, but we remain concerned about how this false information that mislead Canadians about Ms. Paul’s statement and which claimed Israel used “excessive force,” was able to be published by our public broadcaster. This instance of media bias clearly reinforces the need for more editorial oversight and scrutiny at the CBC.