Writing on the CBC’s website today, Neil Macdonald, a reporter whose animus against Israel is well known (see his top 10 journalistic transgressions here, and more here, here, & here) published an article with the following inflammatory and inaccurate headline:

In an HRC complaint sent this morning to Marissa Nelson, Managing Director of CBC.ca, we asked if CBC can prove that the Federal Government has “threatened” hate crimes charges against boycott Israel advocates? Can the CBC even cite one such example? The article itself does not contain anything to substantiate this charge except conjecture and Mr. Macdonald’s deductive reasoning, along with his forming conclusions based on some statements made by senior officials like Public Safety Minister Steven Blaney and his spokespersons.

In fact, Mr. Macdonald only says that “The Harper government is signalling its intention to use hate crime laws against Canadian advocacy groups that encourage boycotts of Israel.” This may or may not be the case, but there’s a marked difference between signalling intentions and claiming outright that the government has already “threatened” those who boycott Israel.

Global News reports that “The federal public safety minister’s office flatly denied a report that it has intentions to apply hate crime laws against Canadian groups encouraging Israeli boycotts. ‘This story is inaccurate and ridiculous. These laws have been on the books for many years and have not changed,’ said the spokesman for Public Safety Minister Steven Blaney. ‘We won’t dignify this bizarre conspiracy theory with further comment.’”

Global notes that: “The reporter cited emails between him and a civil servant at Public Safety Canada as evidence” that were published by Glenn Greenwald at The Intercept. The question that remains: Did Macdonald and/or the CBC leak these emails?

Subsequent to HRC’s complaint and the government’s statement of denial, CBC amended the article’s headline which now reads: 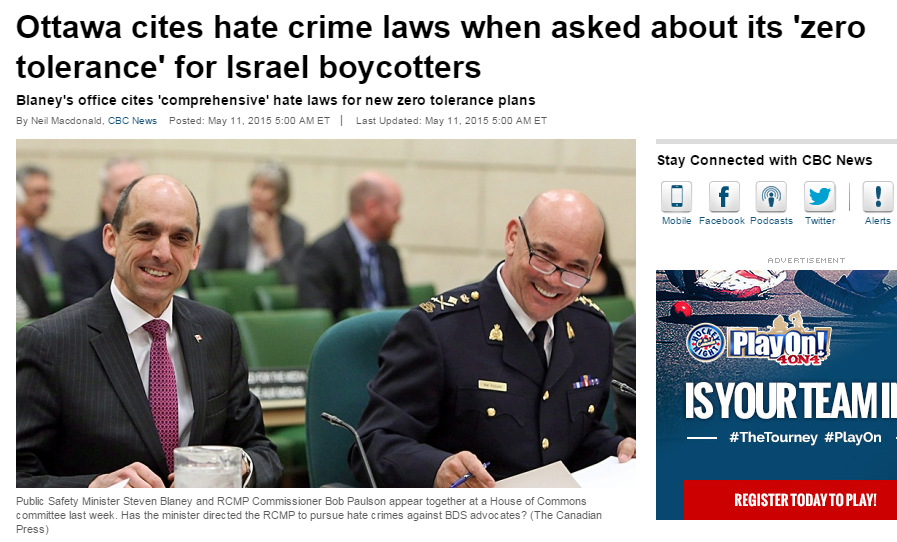 Meanwhile, another CBC article’s headline related to this report was amended from: “McMaster students who boycott Israel among those who could face hate crime charges” to “Are McMaster’s Israel boycott advocates among those who could face hate crime charges?” CBC adroitly changed the headline from a claim to a question and never did publicly disclose that the headline had been amended, a violation of CBC standards. The same violation occurred in the CBC’s failure to publicly acknowledge it edited its original inflammatory headline to Macdonald’s article. As well, contrary to CBC standards this report likely should have been identified as “analysis” but was not.

“Contrary to what this polemic suggests, ethnic origin was long part of the Criminal Code provision. A big factual error. Supporters of anti-Israel efforts are given lots of space to say whatever the Hell they want. The other side isn’t. The story simply does not back up the shocker of a headline, that the federal government is ‘threatening’ critics of Israel with criminal charges. The screed is loaded with phrases and words like ‘could,’ ‘would be,’ ‘if,’ ‘appears,’ and so on.  There is no proof, anywhere, that Ottawa has charged a single person or group. And that raises another factual error: to prosecute a hate crime, you first need the approval of the provincial Attorney General – not ‘Ottawa.’ That’s not all.  The CBC piece even alleges that groups and individuals are under illegal surveillance, without offering an iota of proof. And so on, and so on.”

In our complaint to CBC News, we noted that considering that this issue is highly controversial, we found it greatly troubling that Canadian pro-Israel supporters and organizations were not quoted in this report in the interests of fairness and balance. CBC did manage to quote Tyler Levitan, a spokesman for Independent Jewish Voices, as “the principal organizing vehicle for BDS in Canada,” but not a single pro-Israel source who would have been able to point out how BDS serves only to stigmatize Israel, intimidate its supporters and demonize the Jewish state. How BDS singles Israel out for exclusive censure while rogue human rights offending nations like Iran, North Korea and Syria are let off the hook.

CBC also claimed outright (again without marshaling any objective data) that BDS is a “successful tactic” according to this article’s sub-headline. Of course, this is a subjective claim and was not in attribution, nor was it based on the facts.

The article says only: “The BDS tactic has been far more successful for the Palestinians than armed struggle. And it has caught on internationally, angering Israel, which reckons boycotts could cost its economy hundreds of millions of dollars. Just last month, 16 European foreign ministers denounced the ‘expansion of Israeli illegal settlements in the Occupied Territories,’ demanding that any imported goods originating in the settlements be distinctly labeled.”

Claiming that BDS has been more successful than “armed struggle” does not mean that it’s a “successful tactic” on its own, that’s this writer’s own opinion. And how does CBC measure success? For example, BDS efforts against SodaStream, an Israeli company which produces some products in an Israeli settlement, is suspected of having influenced the company to shut down the factory, though SodaStream denies this. The result of this tactic, its alleged, saw 900 Palestinians who were gainfully employed at the factory out of a job.

As to the efficacy of BDS (boycott, divestment, and sanctions), even one of the most vocal anti-Israel adherents, Professor Norman Finkelstein, has disavowed BDS calling it “silliness, childishness, and a lot of leftist posturing. I mean we have to be honest, and I loathe the disingenuous. They don’t want Israel… there’s a large segment of the movement that wants to eliminate Israel.”

“Israel boasts one of the world’s most innovative economies with the highest ratio of startups per capita, the second-largest venture-capital industry and more than half of our exports deriving from the high-tech sector. In 2014, we witnessed approximately 75 acquisitions or public offerings by large multinationals worth about $15 billion. More than 350 multinationals — including Intel, Apple, Facebook and Google — have established R&D centres, most following the acquisition of an Israeli startup. Just this week, Canada’s BlackBerry purchased the Israeli file-sharing security company, WatchDox, and announced plans to establish a new security-focused R&D centre in Israel.

Our expertise in innovation also extends to the academic field, where Israel has a particular knack for the commercialization of knowledge. Each year, the technology transfer

organizations of Israel’s seven universities and five medical schools generate a total of $360 million in royalties and licence 150 new technologies.

In addition, a place that the Bible calls the “Land of Milk and Honey” has just discovered significant natural-gas reserves off its coast. One thousand billion cubic metres of gas brings the promise of energy security for many years to come and an opportunity for economic co-operation with our Arab neighbours, including last month’s $1.2 billion agreement to send gas to Egypt and similar deals with Jordan and the Palestinian Authority.”

Faced with calls and campaigns promoting BDS, Israel’s economy continues to experience immense economic growth, and locally, ties between Canada and Israel, whether cultural, academic, or business continue to flourish.

This report from the CBC and its Washington Bureau Chief Neil Macdonald contained serious lapses in its journalistic standards. We have asked the CBC for an immediate review of this article and have called for corrective action to be swiftly undertaken.

Last night, CBC doubled-down by broadcasting this Neil Macdonald report on the National and publishing this adjoining article:

The Canadian Jewish News reports that  “The CBC, however, is standing behind its report, saying “our reporter and our editors thought it was a strong, original story.”

“In an email response to CJN queries, Chuck Thompson, head of CBC English Service’s public affairs, stated, ‘When Honest Reporting Canada complains about an aspect of our coverage, we respond to them directly. That organization knows how much priority CBC News places on being accountable for what we do. CBC News has a set of journalistic standards and practices which are transparent and available to the public. For times where our responses do not satisfy a complainant, we also are one of the few media organizations that has a fully independent ombudsman who can review whether CBC journalism lives up to those standards.”

And in a subsequent email, Jack Nagler, director of journalistic public accountability and engagement for CBC News, responded to suggestions the item was one-sided by saying, ‘If this were a story on whether BDS was good or bad – or a story about Israeli policies – of course it would have required other perspectives.’

‘But it wasn’t about either of those things. It was about trying to understand what actions the federal government intends to take, given its declaration of ‘zero tolerance.’”