Israel Is An Imperfect Country, But A Vibrant...
Why Are Anti-Israel Activists So Afraid of The...
McGill Tribune Publishes Op-Ed Calling for a Boycott...
Ontario Arabic Paper’s Editor Downplays Holocaust; Meshwar Describes...
How the War in Ukraine is Having a...
Toronto Star Columnist Shree Paradkar Wrongly Claims IHRA...
After Vancouver Adopts IHRA, CBC Radio Interviews Fringe...
Qatar Prepares For The 2022 World Cup: Will...
Lawfare: Who is Using the Law More Effectively?...
Official Publication of the College of Physicians and...
Home Media Action Alerts2014 Globe Reporter: Palestinian Rockets "Protesting Israeli Policy or Just Causing a Nuisance”

In an online discussion hosted on the Globe and Mail’s website on January 22, Mideast Bureau Chief Patrick Martin entertained questions about the “Three major omissions Stephen Harper made on his trip to Israel”. 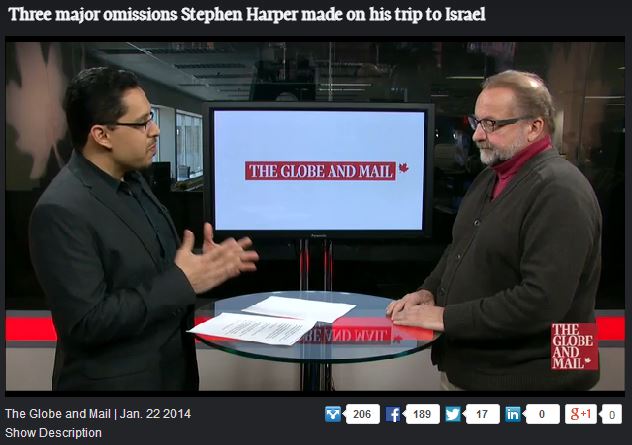 In the discussion, we were struck by how Martin referred to “rockets fired from Gaza” by Palestinians who are simply “protesting Israeli policy or just causing a nuisance”.

Shooting a deadly rocket at civilians isn’t politics and it’s not just a minor inconvenience, it’s attempted murder against men, women, and children. In our professional estimation, Patrick’s flippant comment was disgraceful and was not in keeping with Globe standards.

HonestReporting Canada communicated our concerns to Globe editors who regrettably defended this video as being “both fair and accurate”. According to Globe and Mail Public Editor Sylvia Stead, “…  in describing the rocket fire he (Martin) cites motives for launching them as “protesting Israeli policy or just causing a nuisance.” Like it or not, those are motives for much of the rocket fire. It’s important to recall that Sderot has mostly been hit by home-made Qassam rockets and mortar-fire. You have to go back to November 2012 (the time of Operation Pillar of Defence), for any significant amount of rocket fire on Sderot. The more serious and deadly weapons, such as Grad missiles, tend to be fired at larger communities.”

While Ms. Stead may try to argue that Martin was simply describing Palestinian motives for carrying out the rocket attacks, his statement lacked attribution (Ex. “Palestinian’s claim…”) and therefore viewers could reasonably conclude that it was his view (and the Globe’s) that Palestinian rockets fired at Israel are a legitimate form of protest and nothing more than a nuisance.

To wit, if Al Qaeda terrorists launched rockets at Toronto, we trust that the Globe would not permit its journalists to describe such efforts as a form of “protesting Canadian policy or just causing a nuisance”. Instead, their journalists should describe these appalling efforts as nothing more than terrorism, when innocents are targeted with violence for political purposes.

The Globe’s defense of their reporter’s statement is most disappointing.