Nowadays, every news organization worth its weight has a clearly stipulated editorial policy which explains how its journalists can use social media platforms to complement its traditional journalism.

For example, the Globe and Mail’s social media policy is as follows: 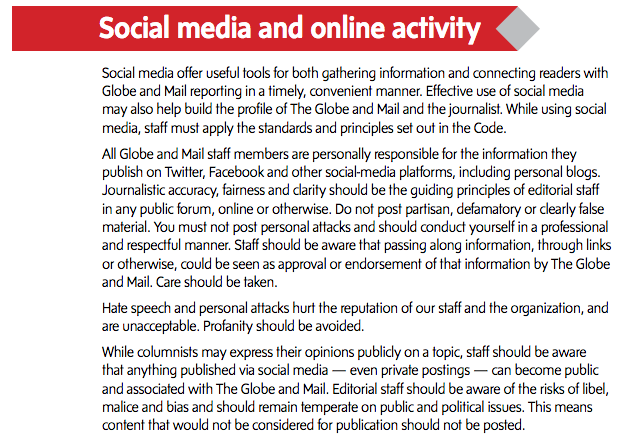 Recently, HonestReporting Canada communicated our concerns to senior editors at the Globe and Mail pointing out that its senior international correspondent, Mark Mackinnon, authored inaccurate and partisan tweets recently which we felt violated the Globe’s policies.

Mark Mackinnon is the Globe’s former Middle East Bureau chief and he has been reporting from Israel and the Palestinian territories recently. He has a very large social media reach with over 52,400 followers on Twitter.

As we wrote to Mr. Mackinnon directly:

@MarkMackinnon: There’s no substance to this story. Acc. to multiple sources, the mother was with the boys in #Israel when they died + only returned to #Gaza in order to bury them. https://t.co/aW13z5xDiK

We also communicated that it’s not appropriate for this Globe reporter to insert his personal opinions on matters which he reports on as he’s tasked to be neutral.

To date, we have not received any response from Mr. Mackinnon, nor seen any corrective action.

Sanctioning a moderate politician like @JZarif would show an absolute ignorance of how Tehran works (and put up a giant barrier to the diplomatic outcome that Trump says he wants)… https://t.co/DncAUJd0tQ

From our perspective, Mr. Mackinnon is tasked to be politically neutral and objective and should not insert his personal viewpoints on matters which he reports on. In this Tweet, he is clearly staking out a position and labeling Iran’s Foreign Minister as a “moderate.” That’s a subjective term, to which not all will share and he is clearly arguing that the Trump administration’s decision to sanction Jawad Zarif, is tantamount to “absolute ignorance”. Had this statement been made in attribution it would have been fine, but it wasn’t.

These kinds of comments are for the world of punditry (people paid for their opinions), not for reporters.

HRC has communicated our concerns to the Globe and we are hopeful that action will be taken by senior editors to ensure that its reporters adhere to their own social media policies. Stay tuned to this page for future updates.