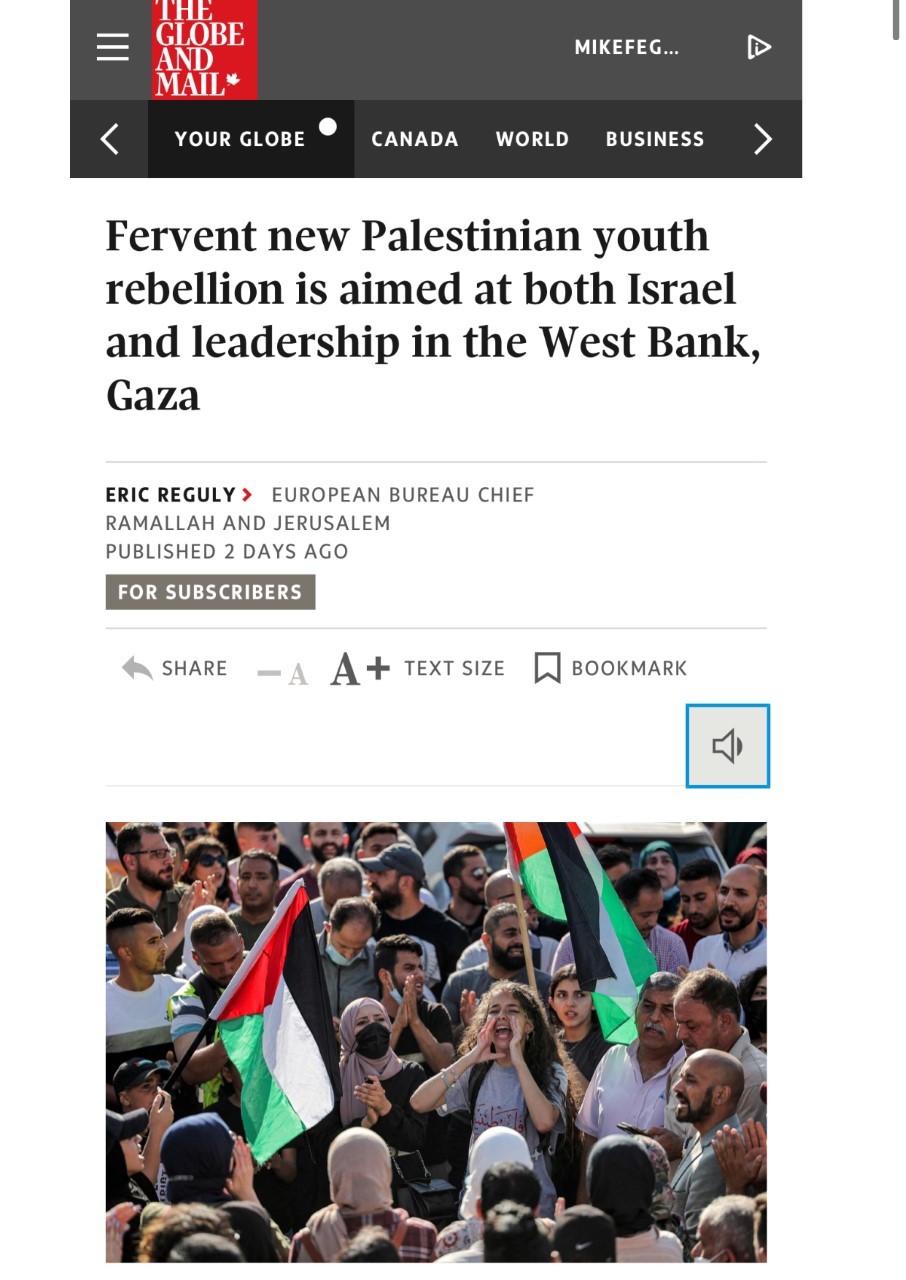 He just can’t resist. Once again, another Eric Reguly article in the Globe and Mail was replete with anti-Israel misinformation.

Reguly’s front-page report on June 28 entitled: “Fervent new Palestinian youth rebellion is aimed at both Israel and leadership in the West Bank, Gaza,” saw Reguly frame Israeli settlements as a colonial enterprise and illegal according to international law. No mention was made about 3,000 years of Jewish indigeneity in Judea and Samaria and in Jerusalem proper.

Israelis is east Jerusalem are all pejoratively referred to as “settlers” by Reguly. Forget the fact that the Arab population in Jerusalem has exponentially grown and that has far outpaced Jewish growth. Meanwhile, the alleged Jewish “influx” in east Jerusalem is framed as ethnic cleansing and “Jewish colonialism.” In truth, the Muslim population of Jerusalem has grown nearly 250% from 1987 to 2016, and their share of Jerusalem as a whole has grown from about one quarter, to nearly 40%. The Muslim population in Israel as a whole has also grown nearly ten-fold in the last 70 years, from about 200,000 to more than two million today. Instead of a “Judaization” of Jerusalem, Israel is experiencing an “Arabization” of Jerusalem.

Of course, no mention was made by Reguly that the under the Trump administration, the United States didn’t consider settlements as being illegal. Israel vehemently disputes this characterization citing legal, religious and ancestral claims to these lands. Disputed they may be, but illegal is a one-sided political proclomation.

Reguly says Hamas depicts itself as the “protectors of Jerusalem,” but ignored how Hamas fired rockets at Jerusalem and the third holiest site in Islam, the Al Aqsa Mosque. Some protection mind you!

Instead of quoting an Israeli source, Reguly quotes the West Bank director of UNRWA, an organization known for its ties to the Hamas terror group.

Reguly devoted some coverage to the murder of Nizar Banat, an outspoken critic of the Mahmoud Abbas and the Palestinian Authority, who was killed while in the custody of Palestinian security forces, but found it necessary to drag in the conflict in Silwan and Sheikh Jarrah into his article by framing the El-Kurd twins as innocent heroes and by rendering any Jewish claims to these areas as de facto “stealing” and land theft.

On Sheikh Jarrah, no mention was made that Palestinians refused to pay rent to the Jewish owners and who were slated for eviction as a result of a civil dispute not tied to the Israeli government and that is being heard by the Supreme Court.

Reguly says: “Jewish settlers claim historic rights to parts of Sheikh Jarrah” while later on saying that “Palestinians (are) fighting to keep their homes.”

This statement just about tells you who Eric Reguly believes has ownership. Jews have claims, Palestinians have undisputed title.

We’ve chronicled Eric Reguly’s tendentious reporting about Israel recently and have relayed these sentiments directly to senior editors at the Globe and Mail.

It’s time for Canada’s paper of record to commit to producing fair and accurate reporting about Israel where their reporters don’t disguise their opinions as news.

Send your considered comments to the Globe and Mail about Eric Reguly’s biased anti-Israel reporting. Send letters to: letters@globeandmail.com.