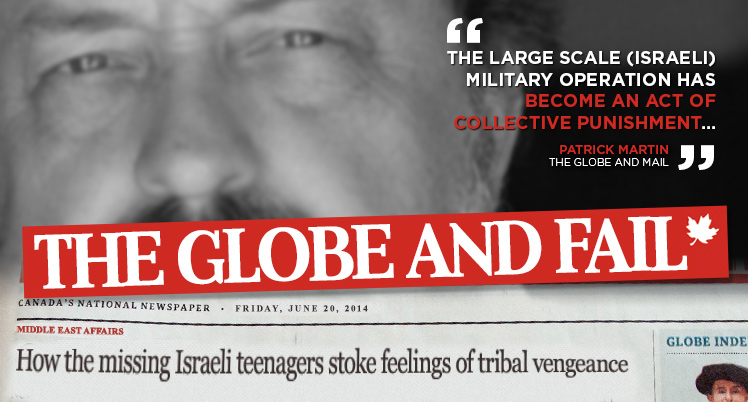 As the Globe’s Mideast bureau chief, journalist Patrick Martin is tasked to be politically neutral and is supposed to be an objective reporter, and yet, in a report published to the Globe’s website on June 20, this reporter staked out the position that Israel’s actions in the west bank recently to find the three kidnapped Israeli teenagers is a form of “collective punishment”.

“The large scale military operation has become an act of collective punishment and has triggered a response from Palestinians such as the clash in which the Palestinian youth was killed.”

“On Saturday, concerned Israelis plan a demonstration in Tel Aviv, to protest the collective punishment being meted out by their defence forces.”

It’s important to note that this reporter did not either directly or indirectly attribute the above statements, as such, this is not just the viewpoint only of the Globe’s reporter, but of the Globe and Mail itself.

There’s indeed a healthy debate within Israel about whether such actions do amount to “collective punishment”, see the Times of Israel for example, which notes that legal experts disagree with the viewpoints of some NGO’s who say Israeli efforts amount to “war crimes”.

Either way, for the Globe’s Mideast bureau chief to stake out this position instead of being a neutral observer saw him engage in advocacy journalism. How can we expect Martin to report objectively in the future on this file given his myopic view on this matter?

“The article by Patrick Martin is a World Insider piece available to subscribers. Those articles are clearly identified as analysis pieces, special articles for the subscribers. It says it is “intelligence on world events and trends exclusively for Globe Unlimited subscribers”. There is further indication this is an analysis by the photo of Mr. Martin and the headline which says “How the missing Israeli teenagers stoke feelings of tribal vengeance: As Middle East correspondent Mr. Martin is expected to write regular analysis pieces based on his extensive experience and knowledge in and of the area. In my view, his article falls well within the area of analysis and is clearly marked as such.”

In a follow-up email to HRC, Ms. Stead claimed that Martin’s report constituted “a well-informed explanation of current events.” As we pointed out to the Globe, an analysis piece does not allow a reporter to insert their personal opinions. They should be fence sitters. Mr. Martin’s outright claiming that Israel committed “collective punishment” is not based on fact, they are his personal views and should not have been included in this report, unless in attribution.

Is Israel’s operation to find the kidnapped teens a war crime? Raphael Ahren of the Times of Israel notes the following:

If you would like to send your considered comments to the Globe about this matter, please communicate your concerns about Patrick Martin having claimed that Israel committed “collective punishment” against Palestinians on June 20. Please send letters to the Globe’s Public Editor, Ms. Sylvia Stead at: sstead@globeandmail.com.