Writing in the Globe and Mail on August 24, former Mideast bureau chief Patrick Martin penned a news article entitled “Israel’s new Gaza tactic is playing with fire” which was replete with anti-Israel bias and which saw this journalist’s opinion disguised as news.

Within hours of this report being published, HonestReporting Canada filed a complaint with Globe and Mail Editor-In-Chief David Walmsley and Public Editor Sylvia Stead. In our complaint, we referred to the Globe’s myopic sub-headline which said the following (emphasis added): “Defense Minister says he has ‘no intention’ of escalating tensions in the Palestinian territory, but his actions speak otherwise.” 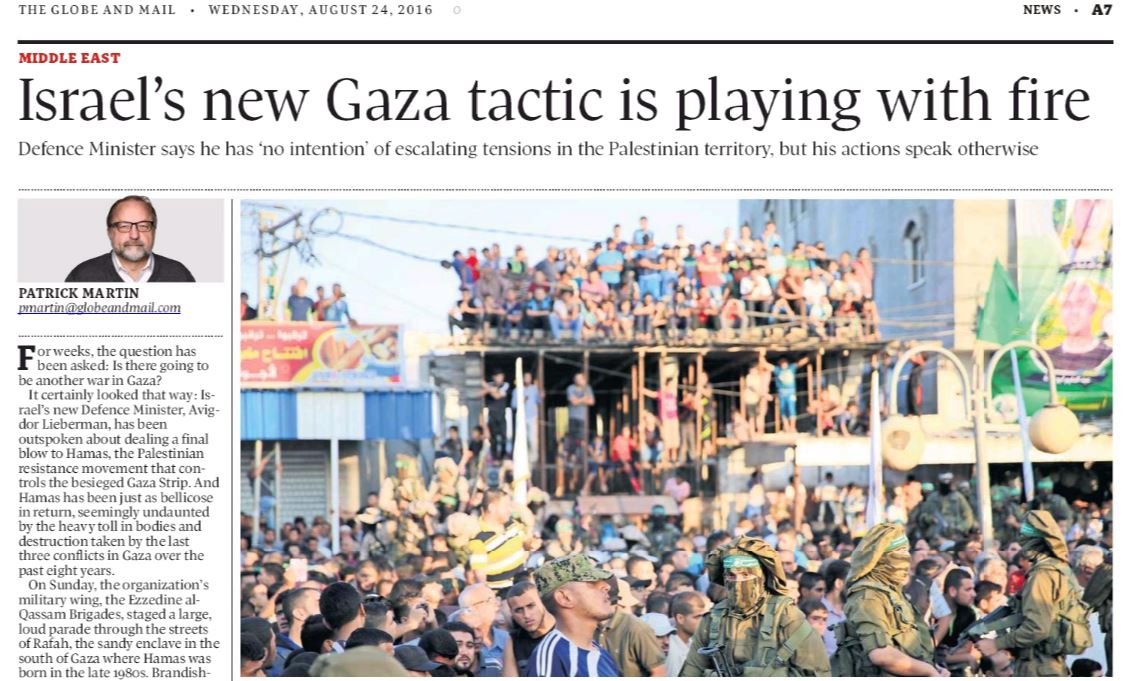 Was Israel’s response to a Palestinian rocket attack by shooting 50 missiles at Hamas targets an effort to defuse tensions and re-establish a policy of deterrence, or was it an inducement and escalation of hostilities with Hamas? Truth is, no one knows, but Mr. Martin is seemingly of the opinion that Israel is escalating tensions because Defense Minister Lieberman has wanted to deal “a final blow to Hamas”. The Globe’s sub-headline says Lieberman’s “actions speak otherwise” and Mr. Martin states the following in the article itself (emphasis added): “On Tuesday, Mr. Lieberman explained that Israel has “no intention” of escalating tensions between the two sides – an odd choice of words coming after launching such an exceptionally large fusillade. He told reporters that Israel wants to show Hamas that ‘we will not stand by idly and let [Hamas] arm itself.’”

In an interview with the Canadian Jewish News on August 11 on the topic of “How Canadian journalists cover Israel,” Mr. Martin was quoted as saying that there was “tremendous exaggeration” by Israel of the damage Palestinian rockets can do. Martin’s downplaying of the danger that Palestinian rockets pose is consistent with his previous claim in 2014 that Palestinian rocket fire is merely an effort at “protesting Israeli policy or just causing a nuisance”. Tell that to the family of Daniel Tragerman, a 4-year-old Israeli boy who was killed by a Palestinian mortar fired at his home at Kibbutz Nahal Oz on August 22, 2014, almost 2 years ago to this very day. When the red alert siren went off, Daniel didn’t have time to make it to a bomb shelter and he was killed by shrapnel from the mortar shell.

It’s important to note that Mr. Martin’s article did not feature any quotes from interview sources and the following statement he wrote is also revelatory of bias (emphasis added): “At just about the same time, at the far north end of the Gaza Strip (about 40 kilometres away), a lone rocket, said to have been launched by the Popular Front for the Liberation of Palestine (PFLP) in Gaza, landed in the nearby Israeli town of Sderot. It was just the 14th missile to have been fired from Gaza this year, a spokesman for the Israel Defence Forces (IDF) said, most of which were launched by fringe Salafi-jihadi groups, and none by Hamas.” Imagine if Toronto was on the receiving end of 14 deadly missiles fired from New York. Would a Globe and Mail reporter say that “just” 14 missile have been fired from New York to Toronto this year?

In his article, Mr. Martin implies (without foundation) that Israel’s targeting of these Hamas military positions was a deliberate effort to escalate tensions (not to diffuse them) with Hamas, possibly inviting another deadly war. In essence, Mr. Martin has used true facts to draw potentially false conclusions. As well, Mr. Martin seemingly does not approve of Israel’s response to the PFLP rocket attack from Gaza. For Mr. Martin, it seems that only a close to proportionate response would be proper. Irrespective of the fact that there were no fatalities or injuries in the rocket attack, the simple fact that Israel shot 50 missiles at Hamas in response to 1 fired at Israel, was enough to seemingly invite disdain from Mr. Martin in his article. But as Mr. Martin conceded: “The (Israeli) shelling did hit Hamas military infrastructure, though at a time when very few people were on duty.” If Israel really wanted 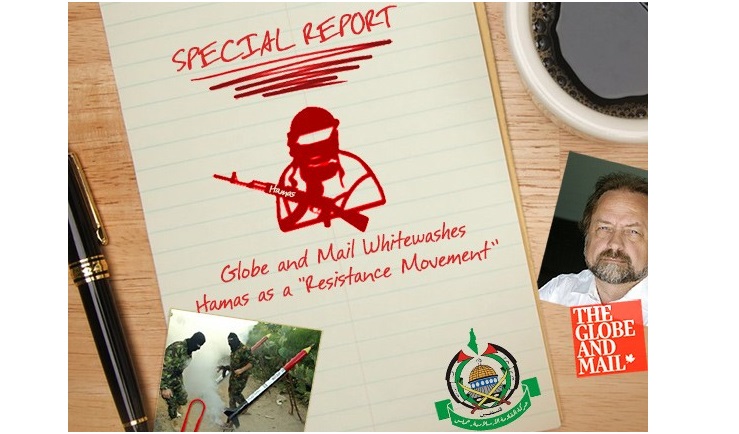 to escalate matters, it could have carried out targeted assassinations of Hamas leaders or attacks on Hamas terrorists at public parades and gatherings. Instead, Minister Lieberman claims he only wants to stop Hamas’ “militarization”.

How does reporter Patrick Martin view Hamas? In his interview with the Canadian Jewish News, Martin was quoted as saying that the “bulk” of Hamas officials wanted to deal with Israel. In the lead paragraph of the Globe’s article on August 24, Martin claimed that Hamas is a Palestinian “resistance” movement, a statement which framed Hamas’ efforts as being legitimate. In employing this Palestinian euphemism, Martin whitewashed the fact that Hamas is proscribed terror group according to Canada, the U.S. EU, and others. This is entirely inappropriate language when referring to individuals whose day job is to murder innocents and who are committed to Israel’s destruction.

In his interview with the Canadian Jewish News, Patrick Martin claimed he “tread(s) very carefully and I stick to the facts.” Referring to the work of media watchdogs like HonestReporting Canada which hold Canadian reporters to account for their reporting on Israel, Martin said that he doesn’t “pay much attention to (the) critics” and that “reporting from the region is ‘not a matter of being balanced. It’s a matter of being fair-minded. And that’s the key. I stick to that. Sometimes you’re not writing opinion, but you obviously make choices on what you cover and how you cover it.’”

Globe and Mail readers deserve objective news without spin or political bias. Patrick Martin’s reporting on August 24 fell well short of the Globe and Mail’s journalistic standards and has served to mislead its readership and tarnish Israel’s reputation.

HonestReporting Canada awaits the Globe and Mail’s response to our complaint which we look forward to sharing with you, our subscribers. Stay tuned to this page for updates.

Mike is the Executive Director of HonestReporting Canada and is responsible for the day-to-day running of the organization, its financial management and project development. A seventeen-year veteran of the Canadian journalism industry, Mike was a former editor-in-chief, reporter, and anchor of various news programs and publications. Mike’s focus is on delivering efficiency and professionalism as HRC moves into new technological and geographical spheres. Mike is a human rights expert and a frequent on-air commentator. His work has been published in the Globe and Mail, the National Post, Toronto Star, CBC News and more.