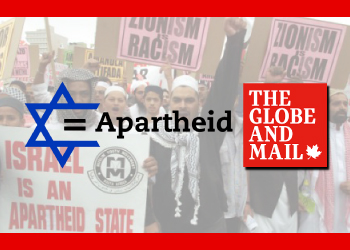 The slur that Israel presently is, or that it’s turning into an “apartheid” state, is one of the most egregious, false and inflammatory canards employed by Israel’s detractors.

HonestReporting Canada has combated this libel before and we expect it to resurface again, but to see the Globe and Mail’s former Middle East bureau chief and current international correspondent employ this term, was appalling.

.@MarkMackinnon: as @LahavHarkov reported “The plan is for #Israel *not* to annex areas in which #Palestinians live”. Your reference to “#apartheid” in not only false, but inflammatory. A correction is called for. https://t.co/ceNmcuWCME @SylviaStead

We await a response from Mr. Mackinnon and the Globe’s Public Editor, Sylvia Stead, hoping for corrective action. Stay tuned to this page for future updates.