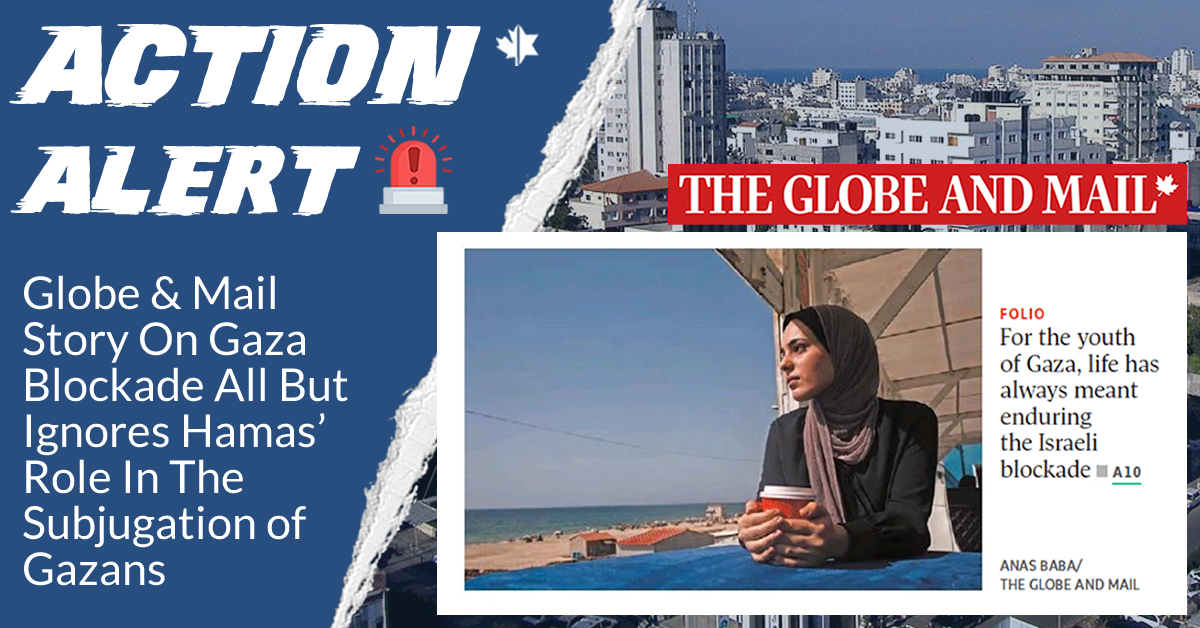 There is no denying the sad reality that is the Gaza Strip today. The coastal enclave, governed with an iron first by Hamas, the Islamist terrorist group, is home to roughly two million people in an area just over half the size of the city of Toronto.

But rather than delving into the details of how and why Gaza’s inhabitants find themselves in such an unenviable position, and what can possibly be done about it, commentators and critics far too often point the finger at Israel, while effectively disregarding the much bigger picture.

That is exactly the case with Eric Reguly’s recent front-page feature in the Globe and Mail entitled: “Gaza’s young people have known nothing but a blockade for 15 years. Palestinians share their stories of endurance.” Reguly, the Globe’s European Bureau Chief, published a nearly three-thousand-word story on the suffering endured by Gazans today, but left readers with remarkably little backstory and context.

In framing his article, Reguly writes (emphasis added): “To go from Israel to Gaza, as The Globe and Mail did at the end of May, is to slip from wealth to poverty in a few metres. In Gaza, many families and street merchants still rely on ponies and carts for transportation.” This statement pretty much sums up Reguly’s opinion which is disguised as news. In his eyes, Israel is a land of great wealth and presumably no poverty.

With respect to the conflict, Reguly points out that the Israeli-Egyptian blockade of Gaza began in 2007, “a year after Hamas won the Palestinian legislative elections.” Though Reguly acknowledges that “… Israel – along with the U.S., Canada and the European Union – considers (Hamas) a terrorist group,” little context is provided about Hamas’ commitment to the destruction of Israel, along with its ideology, practices and methods, which leaves readers with the impression that Hamas is merely a political force or government which Israel opposes, and thus which the Jewish State punishes with a punitive blockade.

Such a conclusion would be dangerously wrong.

Hamas is a theocratic, Islamist terrorist organization which, since its establishment in 1987, claimed the lives of many hundreds of Israelis in terrorist attacks. Some of Hamas’ favoured methods include suicide bombings, where Hamas operatives strap themselves in a bomb vest, often packed with ball bearings for extra violent potential, and enter a crowded space full of Jews. Countless Israelis died at Hamas’ hands in bombings in buses, discotheques, restaurants and stores as a result of Hamas’ murderous actions.

Since Israel created its security barrier, the number of suicide bombings fell dramatically, but Hamas, a proxy of Iran – never content to let Israelis live unharmed, and now in charge of Gaza – turned the enclave into a mini terror kingdom.

From 2007 until today, roughly 18,000 rockets and other deadly projectiles, including mortars, were fired from Gaza into Israel, and Hamas’ capacity is increasing. In 2007 and 2008, the terrorist group was estimated to have fired roughly three thousand rockets and mortars over the course of the year, but in just 11 days in May, 2021, Hamas fired more than four thousand rockets into Israel. These rockets destroyed buildings, and killed and injured scores of civilians in Israel, both Israelis and foreign workers, and brought Israel to a standstill.

It is in this context, and also due to Hamas’ use of terror-attack tunnels (which Reguly puts in scare quotes by saying “the Israelis call ‘terror tunnels’”), that Israel’s blockade was placed against Hamas, and why it continues today.

Reguly only briefly acknowledges Israel’s security concerns, writing on the blockade that “Israel claims it is necessary to prevent weapons from reaching Hamas, which Israel – along with the U.S., Canada and the European Union – considers a terrorist group.”

This brief background is grossly insufficient. Hamas is not merely considered a terrorist organization; by every objective standard, it definitively is one. And despite the unfortunate necessity of the blockade on Hamas, it remains critically necessary, with Israel having intercepted multiple attempts by Hamas to import weapons into the Gaza Strip, both from the Mediterranean and from Gaza’s boundary with Egypt.

In his report, Reguly interviews a number of young Palestinians enduring life in Gaza, and writes that “The blockade means Gazans have to endure no electricity for about half of each day (unless they have generators), undrinkable tap water, slow 2G cellular service and a health care system near collapse.”

Reguly absolves Hamas of any responsibility of providing good governance and necessary institution building and maintenance. He ignores how Hamas leaders steal billions for their own personal coffers that are meant for humanitarian relief. He also neglects to mention that Israel provides the large majority of the power provided to Gaza, and that the Palestinian Authority often fails to pay Israel for Gaza’s electricity and that food and medicine are allowed to be sent into Gaza. The only restrictions are for weapons and materials that could have dual-uses for terror purposes.

The dramatic underreporting of Israel’s serious security concerns pales in comparison to Reguly’s seeming blind spot when it comes to Hamas itself, which has ruled Gaza for more than a decade and a half, but has shown little interest in improving the lives of its own people. 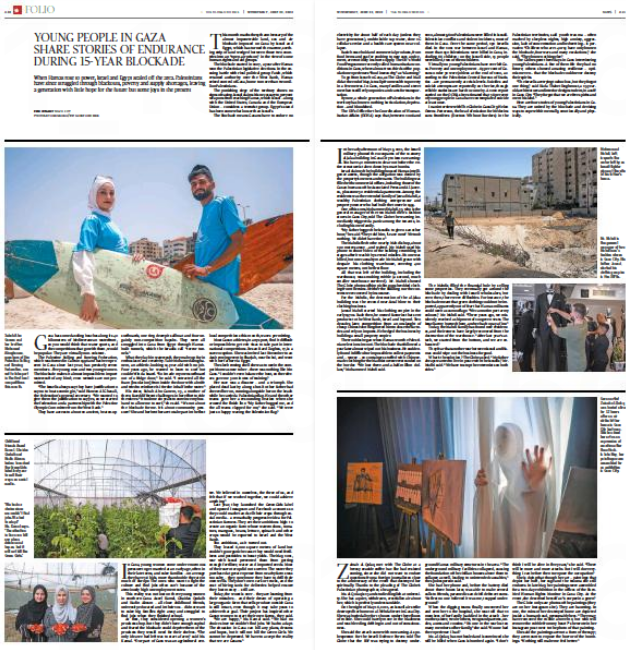 Above: June 22st print edition of Reguly’s article from the Globe and Mail

In his extensive report, Reguly describes in detail the damage caused by war, but does not mention how an estimated 800,000 tonnes of concrete, imported into Gaza by Israel with the express purpose of rebuilding the area, was instead diverted into constructing a network of tunnels which Hamas used to send fighters into Israel. Hamas’s embedding its fighters in civilian areas is a bona fide war crime. Hamas’ situating its rocket arsenals in Gaza residential neighbourhoods, mosques, schools, hospitals, etc. renders the Palestinian population as human shields, a flagrant violation of international law.

Reguly also fails to describe how every few years, and most recently in 2021, Hamas launched a violent and unprovoked rocket war at Israel for no benefit whatsoever to its people, where it fired thousands of deadly rockets into Israel. It is against this backdrop that a small, but vocal group of Palestinians have begun speaking out against Hamas’ abuse of its own people, but Reguly doesn’t acknowledge this.

“Hamas has billions of dollars in investments in many countries, while people [in Gaza] starve to death and migrate in search of work,” one Palestinian, Amer Balosha, said to the BBC in protest against Hamas earlier in 2022. 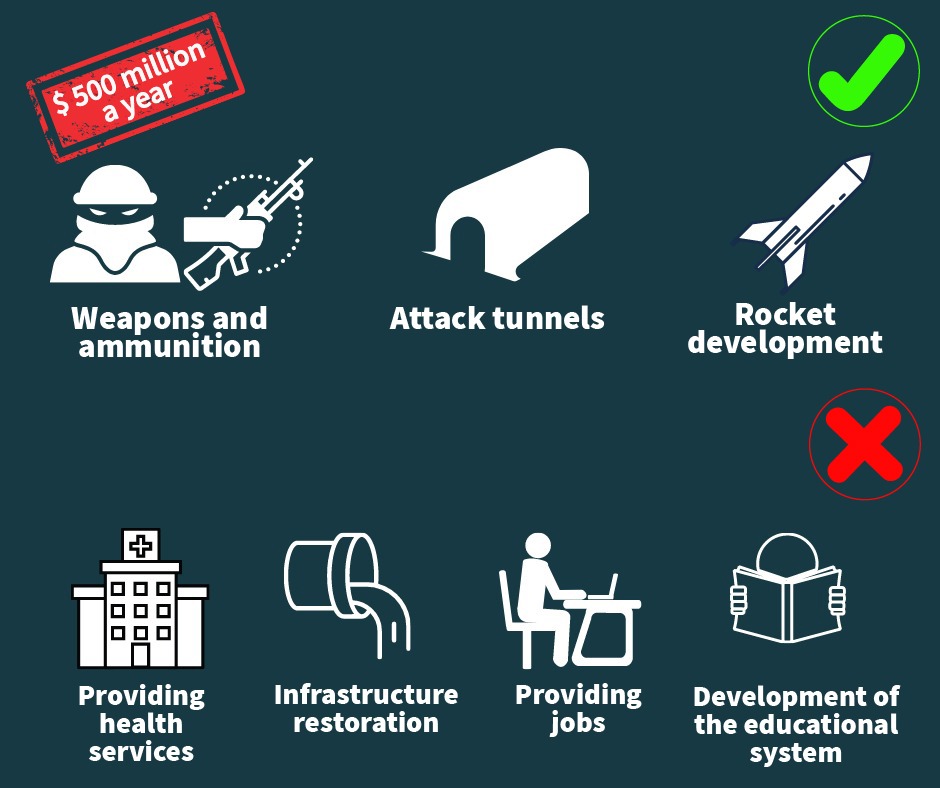 For more than 15 years, Hamas has taken advantage of world sympathy to attract billions of dollars in development aid, only to redirect it to its never-ending crusade of war against Israel, all while everyday Palestinians living in Gaza continue to live in abject poverty and suffering. Importantly, while Reguly’s article focused on the impact of the blockade on Gaza, only Israel was on the receiving end of criticism, not Egypt, which also jointly carries out the blockade. By way of example, the Globe’s headline for its print edition focused exclusively on the “Israeli blockade” of Gaza, it read: “For the youth of Gaza, life has always meant enduring the Israeli blockade.”

Reguly writes that Gaza is sometimes described as an “open air prison” according to aid groups, and in some respects, he is correct, but his focus is entirely misplaced. Gazans have nowhere to go, and little hope for the future. But if Gaza is a prison, Hamas is the proverbial masochistic warden who is happy to see everyday Gazans suffer so it can continue its fruitless war against Israel.

In the interests of fairness and balance, the Globe and Mail is duty bound to produce a feature-length report documenting how Israelis have known nothing but terrorism since Israel’s establishment 74 years ago. The Globe should also share their stores of endurance and atone for Eric Reguly’s ignoring Hamas’ role in the subjugation of Gazans. Please send complaints to Globe and Mail Public Editor, Sylvia Stead, at sstead@globeandmail.com.