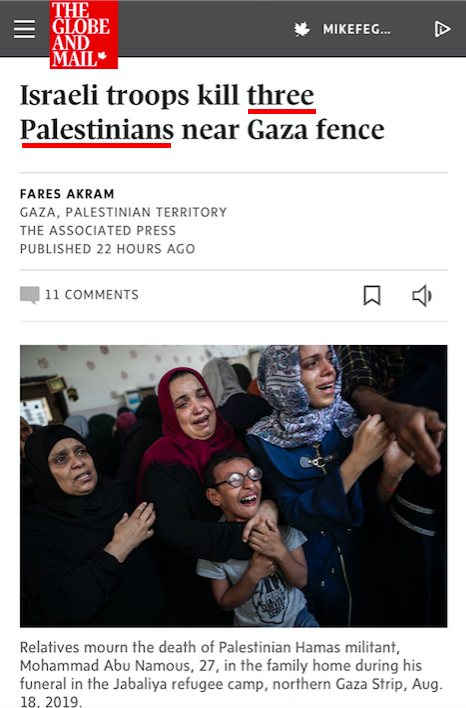 Five armed Palestinian-Arab terrorists attempted to infiltrate Israel in order to carry out a massacre of Israelis. In self defence, Israel killed three of the terrorists, and this is the headline featured on the Globe and Mail’s website on August 18!

Untold in the headline given to this Associated Press article, Israel says the three Palestinians were armed terrorists who attempted to infiltrate Israel to carry out a massacre of innocents. The terrorists, Israel says, were armed with rifles and are believed to be affiliated with Hamas and Islamic Jihad. It’s understood that there were five terrorists in total who attempted to breach the fence between Israel and Gaza, three were killed by the IDF. Naturally, in the face of efforts to carry out a mass casualty attack, Israel has to defend itself.

It’s very troubling that this Globe headline doesn’t acknowledge that the Palestinians were: a) armed and b) were terrorists / “militants”. Instead, readers of this headline may come to the wrong conclusion that Israel killed three presumably innocent Palestinians. After all, readers see headlines 3:1 over the adjacent article and the situation is compounded as the headline is what is shared on social media platforms like Facebook and Twitter.

The article itself notes that: “At a funeral held for the men, the bodies were draped in the flags of different factions – Hamas, Islamic Jihad and the Fatah movement of President Mahmoud Abbas, whose forces were driven out of Gaza when Hamas seized power.” As well, the photo caption drawing sympathy to the dead Palestinians, does state that one of the dead was a “Palestinian Hamas militant”.

Here’s a video from the IDF showing the attempted infiltration by the Palestinian terrorists:

In the time it takes to watch this video, our troops had already arrived at the scene in order to stop the terrorists. pic.twitter.com/gJcQNoPM2V

As a means of comparison, here’s the National Post’s headline: 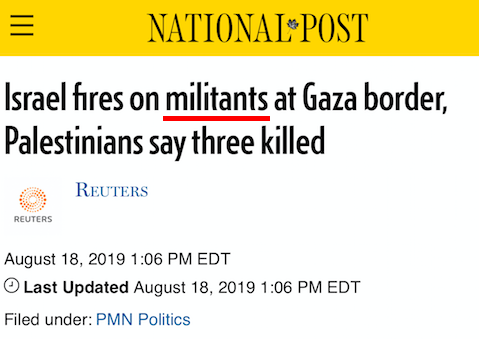 HonestReporting Canada (HRC) has filed a complaint with the Globe and Mail calling on the paper to correct this headline which wrongly portrayed Palestinian terrorists as victims. HRC asked the Globe to identify the dead Palestinians as armed attackers in this headline.