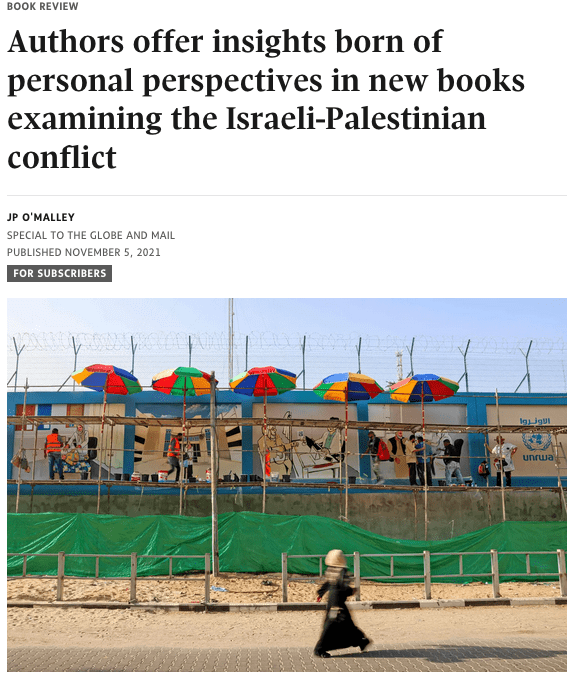 Rarely does a book review in a major Canadian newspaper include widespread and significant anti-Israel misinformation, but that is exactly what readers of Saturday’s Globe and Mail were treated to with the recent book review: “Authors offer insights born of personal perspectives in new books examining the Israeli-Palestinian conflict,” where author JP O’Malley reviewed two anti-Israel books.

In the first book, “The State of Israel Vs. The Jews,” author Sylvain Cypel regurgitates some of the most worn-out and disproven claims about Israel. In reviewer O’Malley’s words, the author posits that “The book is built around a single argument that is quite convincing: Zionism comes from an aggressive but outdated mode of 19th-century European nationalism that is no longer compatible with pluralistic democratic values in the 21st-century Western-led global order.”

This claim by Cypel – repeated without critique by O’Malley – is more than a simple inaccuracy; it is an egregious attempt to re-write the Jewish people’s history in the must unfavourable terms possible, and paint them, not as a group who have lived in their historic homeland for three thousand years, but as a foreign occupier. There is neither doubt nor real dispute that Jews have lived in the historic land of Israel for three millennia; asserting otherwise is akin to claiming that the Nazi Holocaust was a fiction.

O’Malley writes that the “shift towards the radical right has continued over the last four decades and turned Israel ‘into a racist, bullying little superpower,’ Cypel writes.” O’Malley regurgitates Cypel’s allegations that Israel treats Palestinians as “second-class citizens” and engages in “state apartheid.” In fact, Israeli Arabs have full equal rights under the law and prefer to live in the Jewish state rather than a future Palestinian state or the broader Arab world. The review instead paints Israel, and Israeli writ large, as racist bullies.

O’Malley repeats several falsehoods, including that Jewish communities in Judea and Samaria (commonly called the “West Bank”) are illegal under international law, and that Arab inhabitants of pre-independence Israel were forcibly expelled. Noted international law Professor Eugene Kontorovich has written that “occupation occurs when a country takes over the sovereign territory of another country.” Furthermore, Israel in fact holds strong legal ownership over Judea and Samaria, having been given title because of its predecessor, the Mandate for Palestine. One may disagree with this view, but to ignore it entirely and to pretend the argument has been settled is intellectually dishonest.

With respect to the alleged expulsion of Israel’s Arab population in 1948, The Economist explained that a major factor in the displacement was not due to threats from Israel, but from Arab leaders: “It was clearly intimated that those Arabs who remained in Haifa and accepted Jewish protection would be regarded as renegades,” the magazine reported. At the time, marauding Arab armies told Palestinian-Arabs to leave to avoid being hurt, saying they could return once the hostilities were over and the genocide of Jews was complete. Once again, readers of this book review received no nuance or balance; simply a repeat of sensationalist anti-Israel tropes.

O’Malley misled by writing that (emphasis added): “Meanwhile, 76 kilometres away, on the frontier between Israel and the Gaza Strip, IDF snipers were operating on a shoot-to-kill policy. 58 Palestinians were killed and a further 1,350 were wounded on that single day alone. Most were unarmed.” He fails to tell Globe readers that mass violent riots took place at the border where armed terrorists hurled explosives and arson kites at IDF soldiers in a failed attempt to overrun the border and massacre

innocents. Hamas itself acknowledged that 50 of the dead were its own members. On what basis can O’Malley assert that they only operated on a “shoot-to-kill-policy”? Lethal force is only authorized in extreme cases when there is a clear and present danger. Even in a situation like this, snipers are instructed to target limbs unless of absolute necessity.

The second book reviewed, “Unsilencing Gaza,” by Sara Roy, appears to be an even more radical anti-Israel manifesto, at least according to O’Malley’s largely uncritical review, though O’Malley does deserve some credit for not letting pass Roy’s apparent acknowledgement of Hamas, the Islamist terrorist group, as a legitimate political entity. Still, the bad far outweighs the good.

O’Malley claims there was a “Jewish insurgency in Mandatory Palestine.” Of course, insurgency is traditionally defined as a “revolt” or “rebellion,” whereas Jews fought a defensive war against attacks initiated by Palestinian-Arabs and the five invading armies of Egypt, Syria, Iraq, Lebanon and Transjordan: They represented a pan-Arab insurgency.

O’Malley writes that “Roy’s empathetic writing paints a depressing picture of daily life in Gaza. 80 per cent of Gaza’s total population are now completely dependent on international aid to simply live, eat and survive.” Living standards in the Gaza Strip are terrible; that is not being disputed, but to lay the blame at Israel, which it should be noted vacated the coastal enclave entirely more than 16 years ago, is simply absurd. Rather than investing in the region’s economic development, Hamas, which rules Gaza, has invested hundreds of millions of dollars to train and arm its terrorists, to produce and launch thousands of deadly rockets and to build terror-attack tunnels. Hamas decided to turn nearly two million people into prisoners, with Hamas as the warden holding the key. Only six months ago, Hamas unilaterally decided to fire four thousand rockets into Israeli population centres, inviting retaliation from Israel. As O’Malley acknowledged, Hamas to this day refuses to accept Israel’s right to exist, and in fact continues to campaign for the destruction of the Jewish State.

With that context, laying the blame of Gaza’s decrepit state at Israel’s feet nearly exclusively runs contrary to reality.

O’Malley cites Roy’s criticisms of the blockade of Gaza, but fails to mention that it’s in place to stop Hamas from rearming and that it’s done jointly with Egypt. He also refers to Roy’s criticisms of U.S. cancelling funding to UNRWA under the Trump administration, but fails to note that the UN organization is known for its ties to Palestinian terror groups, has had terrorists on its payroll, is rife with corruption and breaches of trust, along with anti-Israel and antisemitic incitement.

O’Malley explains that both books have four main themes: Israel’s alleged illegal occupation must end, the disproportionate body count, Jewish communities (referred to as settlements), and Israel’s alleged “dominion” over the Palestinians.

It would be a major undertaking to challenge the omitted facts and included misinformation in each one of these four categories, but at the very least, O’Malley’s decision to not include any substantive rebuttals of these superficial anti-Israel claims lays waste to any claim that this book review was based in fact-checking in any way whatsoever.