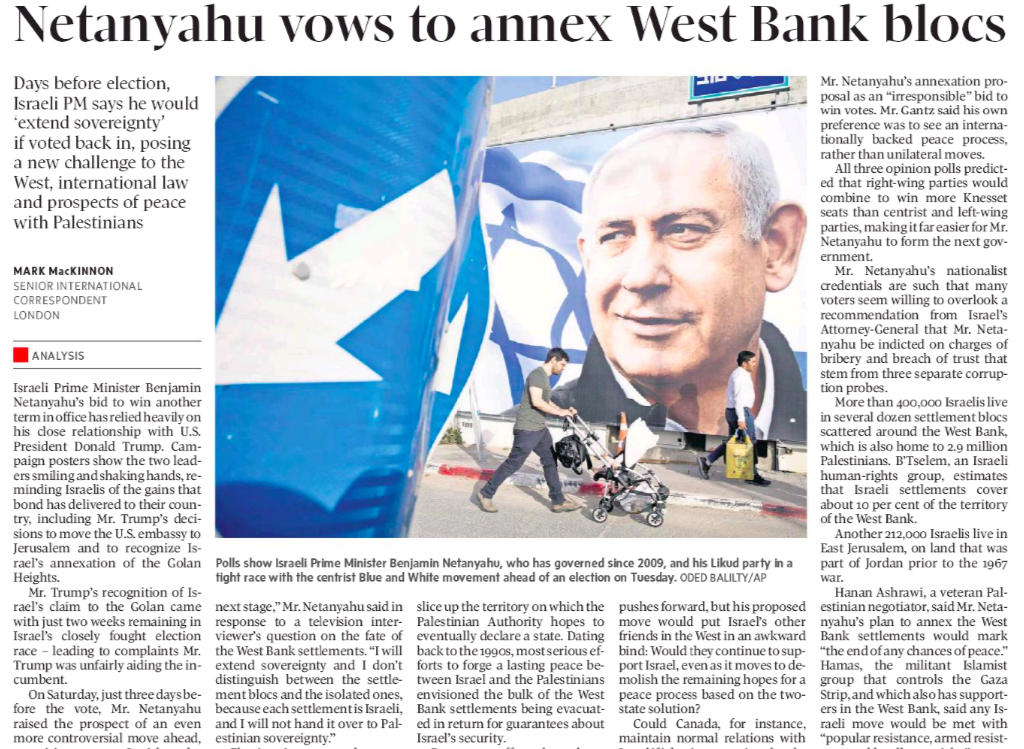 Contrary to Mark Mackinnon’s analysis featured in the Globe and Mail on April 8 (print and online), Israel claims President Trump’s recognizing Israeli sovereignty over the Golan and Prime Minister Netanyahu’s campaign vow to annex settlement blocs in Judea & Samaria (the West Bank), comports with international law, specifically UN Resolutions 242 and 338. Whether this translates to policy is to be determined.

Mackinnon wrongly stated the following in his Globe analyisis:

“The settlements Mr. Netanyahu wants to annex were built, in contravention of the Geneva Conventions, on land that Israel seized after a 1967 war.”

There’s a crucial distinction between the acquisition of territory through aggression and acquiring it through legitimate self-defence. Israel came to possess the Golan and the “West Bank” (and the Sinai which was returned to Egypt in a peace deal in 1979 and Gaza, which Israel unilaterally disengaged from in 2005) in a war of lawful self-defence in the face of annihilation by belligerent Syrian, Jordanian and Egyptian aggressors in the 1967 Six Day War.

Could Canada, for instance, maintain normal relations with Israel if it begins annexing chunks of the West Bank, while still leading calls for Russia to be punished with economic sanctions for its annexation of Crimea?”

Mackinnon failed to consider that the U.S.’ endorsing Israeli sovereignty over the Golan, for example, serves to impart a powerful message of deterrence to warmongers the world over, that in the future, there will be permanent cost to to war and and to those who are aggressors. Regarding the “West Bank”, Israel disputes claims that its actions violate the Geneva Conventions as there was no recognized sovereign of these areas in 1967 and as Israel cites its security needs and biblical, historical and political connections to the land. Israel claims that international law stipulates that it can oversee these lands until a peace deal is procured.

In sharp contrast, Russia’s annexation of Crimea was a blatant violation of international law as it was the clear aggressor.

Mark Mackinnon’s commentary was marred as it altogether failed to contextualize Israel’s perspective of these important issues.

HRC has communicated its concerns to Mr. Mackinnon directly and to the Globe and Mail.