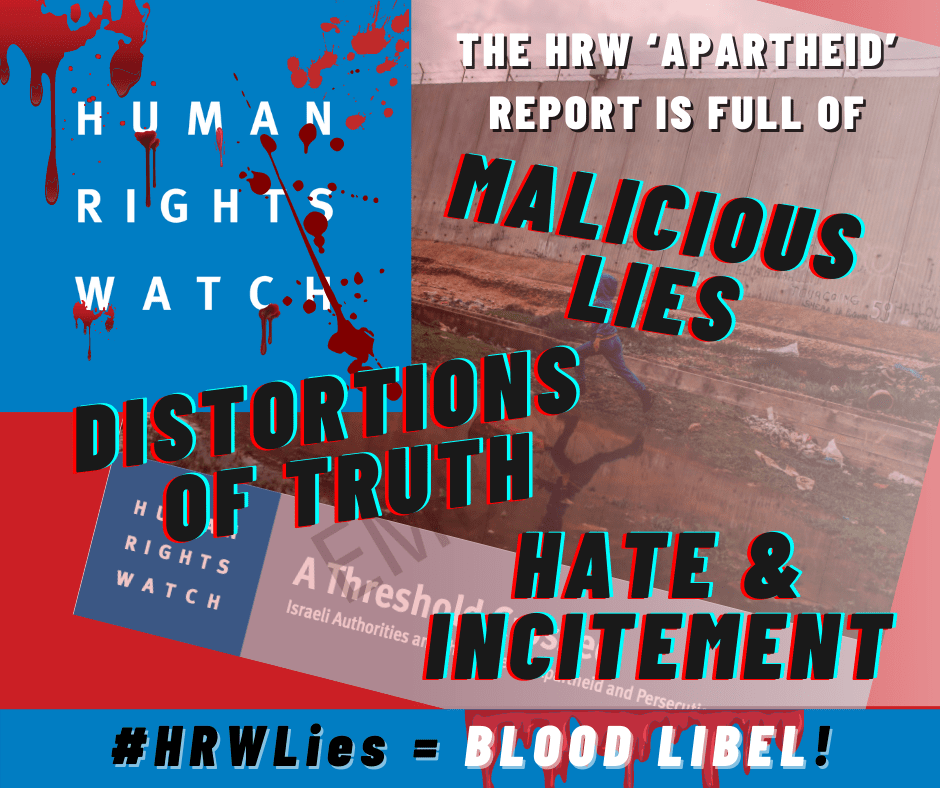 Courtesy of the International Legal Forum

Far from being a “leading” and “widely respected” arbiter of human rights as Globe and Mail reporter Mark Mackinnon claimed today, Human Rights Watch (HRW) is well known for its anti-Israel animus and has been discredited due to its faulty methodology and politicized smear campaigns.

Its latest report, whose lead author is Omar Shakir, an anti-Zionist supporter of the antisemitic BDS movement, declared Israel an “apartheid” state – a wholly disingenuous slur – while calling on foreign governments, including Canada, to impose sanctions on Israel and to reconsider trade deals with the Jewish state. This is the same Omar Shakir  that Israel expelled due to his support for BDS.

In truth, Israel is the only liberal democracy in the Middle East where its 20% Arab minority enjoys full equal rights before and under the law. This is a country where an Arab Supreme Court judge sent a Jewish President of Israel to jail. Israeli Arabs consistently affirm they would rather live in Israel as a minority than anywhere else in the Middle East as part of the majority. Israel’s vibrancy, its openness, and tolerance have solidified its credentials as a progressive liberal democracy whose Arab minority not only enjoys the same rights as all other Israeli citizens, they occupy positions at the pinnacle of Israeli society. Arabs have been elected to Israel’s parliament, they fight in the Israel Defense Forces and partake in every facet of Israeli society.

Amazingly, not once in HRW’s report is terrorism even mentioned! Israel’s security concerns were completely ignored. 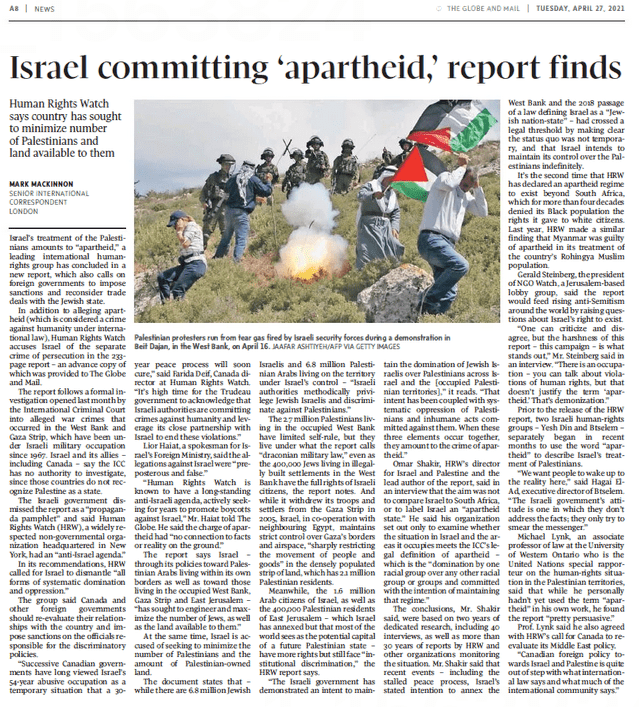 Not surprisingly, an advanced copy of HRW’s report was provided to the Globe and Mail and reporter Mark Mackinnon gladly complied by producing prominent coverage which contained accusations that Israel was committing “crimes against humanity”. Sure, the Globe included responses to HRW’s accusations by the Israeli government and by the pro-Israel NGO watchdog, NGO Monitor, but the damage was done thanks to an incendiary Globe headline proclaiming: “Israel committing ‘apartheid,’ report finds.”

Untold by Mackinnon, HRW’s report fundamentally denies Jews the right to self-determination, applies double standards of Israel by requiring behaviour of the Jewish state not required of any other country, and it uses symbols and images associated with classic antisemitism to characterize Israel and Israelis with words like “Jewish supremacy”, “Judaization”, and “Jewish Israeli control.”

HRW invoked South Africa’s apartheid regime with an analogy to tarnish Israel’s reputation. Untold by HRW, 90% of Palestinians live under Palestinian control and that Gaza is controlled by an internationally-designated terror organization, Hamas.

NGO Monitor asserted that HRW’s report “is the same mix of shrill propaganda, false allegations, and legal distortions marketed by the NGO network for decades.” NGO Monitor’s rebuttal notes that HRW denies Israel’s legitimacy as a Jewish state, specifically with regard to the 1950 “Law of Return,” and repeatedly denounces what they term as Israel’s so-called racist demographic policies.

The Kohelet Policy Forum’s (KFP) analysis of HRW’s report described it as “a propaganda document: full of falsehoods and distortions. The world it describes is an alternate reality.”

Not surprisingly, the Palestinian Authority, which seeks a Judenrein State of Palestine, endorsed HRW’s report. The PA’s quest to make a Jew-free Palestine is the very essence to the term “apartheid”.

In 2009, HRW founder Robert Bernstein wrote in the New York Times that HRW must end its anti-Israel bias, warning it “has lost critical perspective” and if it does not change, “its credibility will be seriously undermined and its important role in the world significantly diminished.”

This context and news was deemed not fit for print by the Globe and Mail. Send letters to the Globe now to communicate your concerns with their report today entitled: “Israel committing ‘apartheid,’ report finds.”: letters@globeandmail.com.