On December 28, HonestReporting Canada asked the Globe and Mail to issue a correction notice and amend its online article which falsely asserted that day that Israel is building “1,400 new settlements.”

Here’s how the article appeared on page A11:

Readers should take note note that the article itself states:

“The Israeli government official said about 600 homes would be announced in Ramat Shlomo, a settlement of mainly Ultra-Orthodox Jews located in an area of the West Bank that Israel annexed to Jerusalem in a move unrecognized internationally.

Another 800 would be built in other West Bank settlements which Israel also plans to keep in any future peace deal, though the list was not yet finalized, the official – who spoke on condition of anonymity – said.”

We are pleased to report that the Globe immediately issued the following correction which was published today, December 30, on page A2: 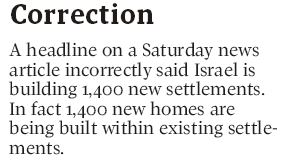 The online headline to this article now correctly states the following: