On January 4, respected Globe and Mail columnist André Picard‘s positive and informative commentary about Israel leading the world in COVID-19 vaccinations, was marred by his repeating the canard that Israel hasn’t vaccinated Palestinians, which he refers to as a “human rights issue”.

In truth, the Palestinians never asked for Israel’s help in procuring and administering the vaccine. To do so, would be to deny Palestinians agency and self-determination. The Palestinians themselves have sourced 4 million vaccines from Russia and are working with the World Health Organization (WHO).

Israel has no obligation to vaccinate non-citizens, but is vaccinating all its citizenry, equally, irrespective of religion, race or creed; whether, Jewish, Arab, Druze, or Christian. In fact, the 1 millionth vaccine administered was on an Israeli Arab and Israel actively is encouraging its Arab minority to get vaccinated. The Oslo Accords recognize that the Palestinians administer their own health care.

In the time of the Black Plague, Jews were also accused of the antisemitic trope of failing to stop the disease’s spread or of withholding the vaccine. There’s no foundation to this modern reincarnation of this medieval libel concocted by Israel’s detractors.

UPDATE: We appreciate that Mr. Picard has retweeted our critique to his almost 120,000 followers: 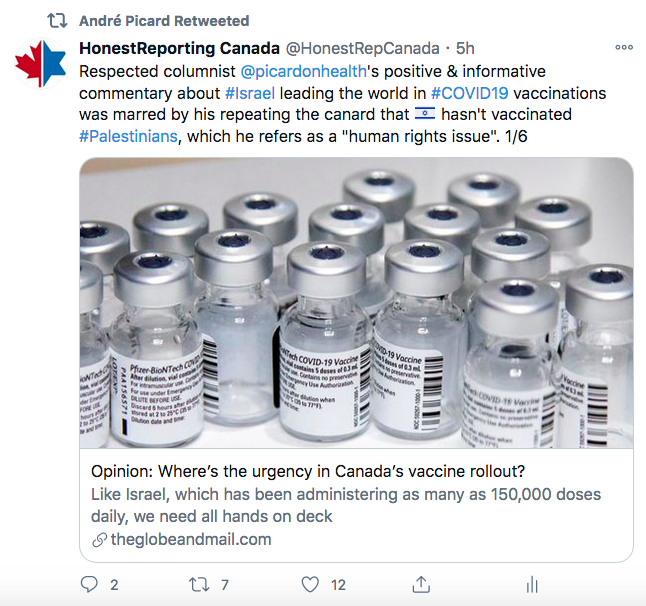 Today, the Globe published the following insipid and misleading correction which effectively doubled down in again accusing Israel of not providing vaccines to Palestinians in the West Bank and Gaza.

The Globe avoided taking responsibility for spreading this falsehood and tacitly declined to edify its readers that those living in the West Bank and Gaza are citizens respectively of the Palestinian Authority and Hamas. Israel has no jurisdiction to provide non-citizens with health care services, especially because the PA never asked for Israel’s help. 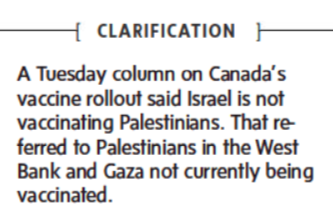