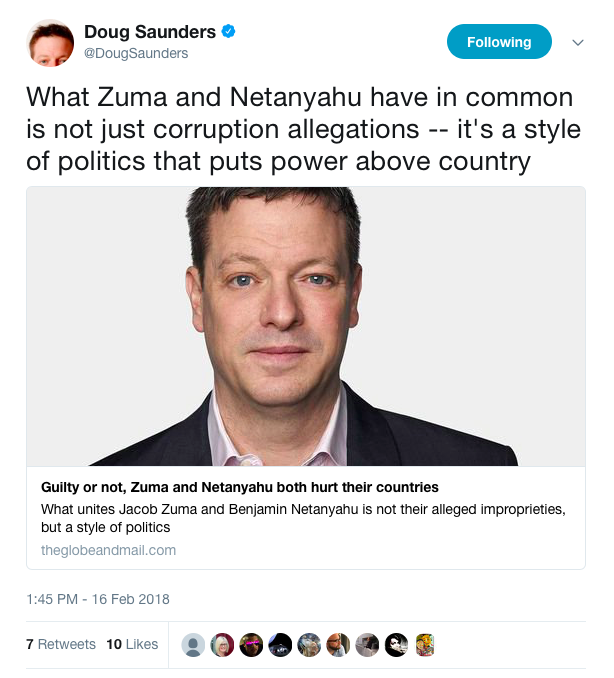 Doug Saunders is entitled to his own opinions, but not his own facts. It’s one thing for Saunders to write a column on the Globe and Mail website on February 16 lumping Israeli Prime Minister Benjamin Netanyahu with former South African President Jacob Zuma, claiming that both leaders “hurt their countries” and that they “put power above country.” It’s quite another thing for Saunders, in exclusively blaming Netanyahu for being the stumbling block to peace between Israel and the Palestinians, to get his facts egregiously wrong.

Netanyahu cannot be fingered for the rise of the terrorist group Hamas – that honourable mention goes to the Muslim Brotherhood, to local Palestinians and to Iran, its chief patron. Netanyahu was not in power when Hamas was formed in 1987, nor was he Israel’s Prime Minister in 2006/7 when Hamas won the legislative elections and assumed control of Gaza in a coup d’état.

In addition, far from refusing to engage in peace talks with the Palestinians, Netanyahu has repeatedly and publicly invited Palestinian Authority President Mahmoud Abbas to sit down with him to negotiate peace. It’s the Palestinians who have been the rejectionists by refusing to enter into bilateral negotiations to procure the long lasting peace we all yearn for.

HonestReporting Canada calls on the Globe and Mail to correct Mr. Saunders’ falsely claiming that Israeli Prime Minister Netanyahu refused “to engage with Palestinian leaders on any matters of substance” and “evade(d) genuine peace talks under three U.S. presidents.”