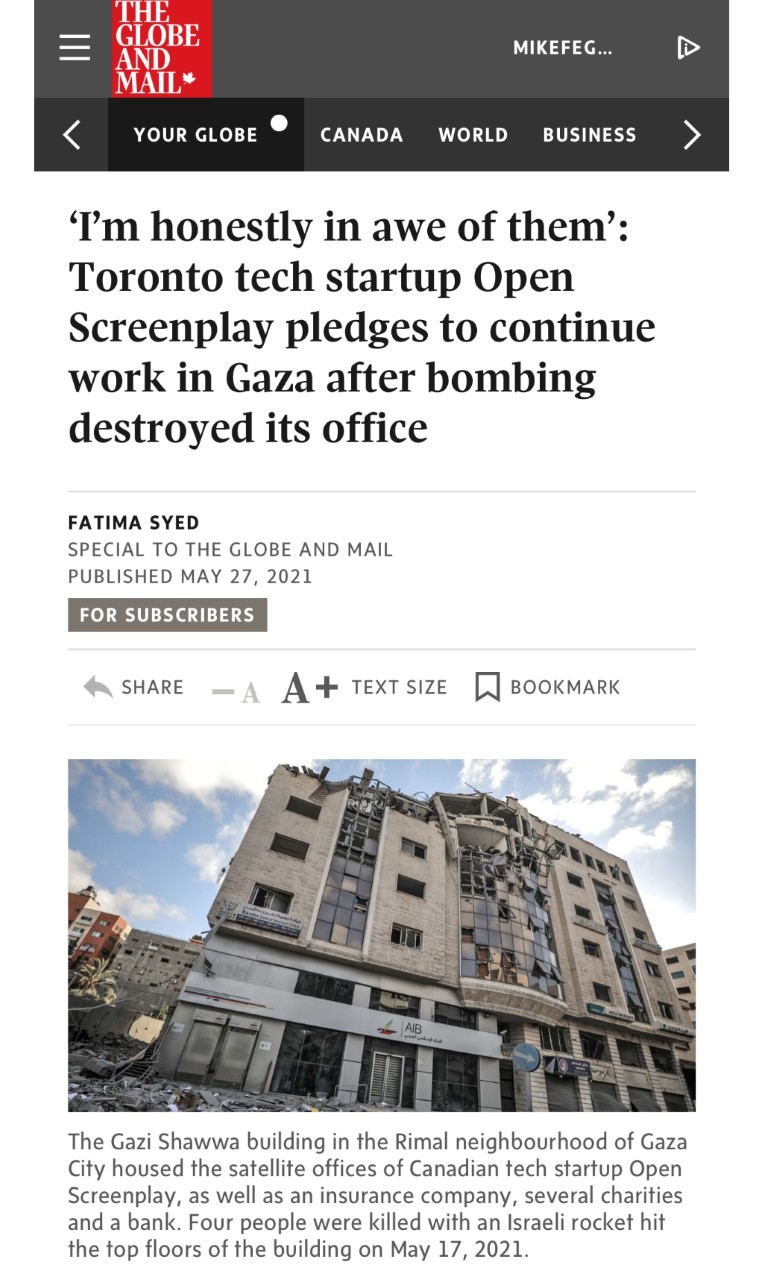 On May 27, the Globe and Mail’s business section and website published an article by Fatima Syed about how the Toronto tech startup Open Screenplay pledged to continue work in Gaza after an Israeli bombing destroyed its office.

Ms. Syed stated the following in the lead paragraph of her article (emphasis added): “Around 5 p.m. ET on May 17, Toronto startup Open Screenplay’s Slack channel received a message from the head of its team of developers in Gaza: ‘They just attacked the building that has our office…’ The message came with a photo of a destroyed building – the target of an Israeli air strike on the 10th day of deadly attacks in the city. In the picture, the building, which housed the Canadian tech company’s office as well as an insurance company, several charities and a bank, was a blackened ruin. Four people died in the attack.”

She also reported that: “Ibrahim Muhaisen, a 29-year-old developer and head of Open Screenplay’s Gaza team, said the team was grateful to be working remotely for a week before the air strike on the office.”

The article closed by quoting Mr. Sabawi as saying (emphasis added): “‘We’re going to continue to hire developers in Gaza,’ Mr. Sabawi added. ‘Despite suffering bombings and apartheid, they inspire us every day with their hard work and resilience. I’m honestly in awe of them.'”

In a complaint sent to the Globe and Mail on May 27, HonestReporting Canada asked if the Globe can substantiate that it was indeed an Israeli airstrike that destroyed this building or if it was an errant Hamas rocket perhaps. We also asked if the Globe was aware of the identities of the four people who allegedly died in the attack? Were they civilians and/or combatants? Lastly, we asked that if it was an Israeli airstrike that felled the building, what was the context behind this incident and alleged attack? Were Hamas terrorists firing from the building or within its vicinity? Did the building house Hamas terror infrastructure? Did the IDF give advance warnings to residents to evacuate the area? Has Ms. Syed asked the IDF for a response to this incident?

As we told the Globe and Mail, we find that the lack of context not referenced in this report about this alleged attack to be quite troubling on the face of the serious accusations levelled. It was especially concerning that no reference was made of Hamas firing rockets at Israel, 4,000+ in 11 days.

In response to our complaint, Globe and Mail Public Editor Sylvia Stead sent us an article from CNN (click here) which the Globe said confirmed that an Israeli airstrike had destroyed the building. The Globe also highlighted the following statement in the CNN article (emphasis added):

“A spokesperson for the Israel Defense Forces told CNN at the time that it had targeted the main operations center for Hamas’ internal security forces in the same neighborhood, and that the target building was close to the medical clinics and aid offices.”

While the Globe declined to take any corrective action, we pointed out that the CNN article clearly displays that the Globe’s own article by Ms. Syed lacked context and was therefore unfair. CNN found it important to reference in its own article that 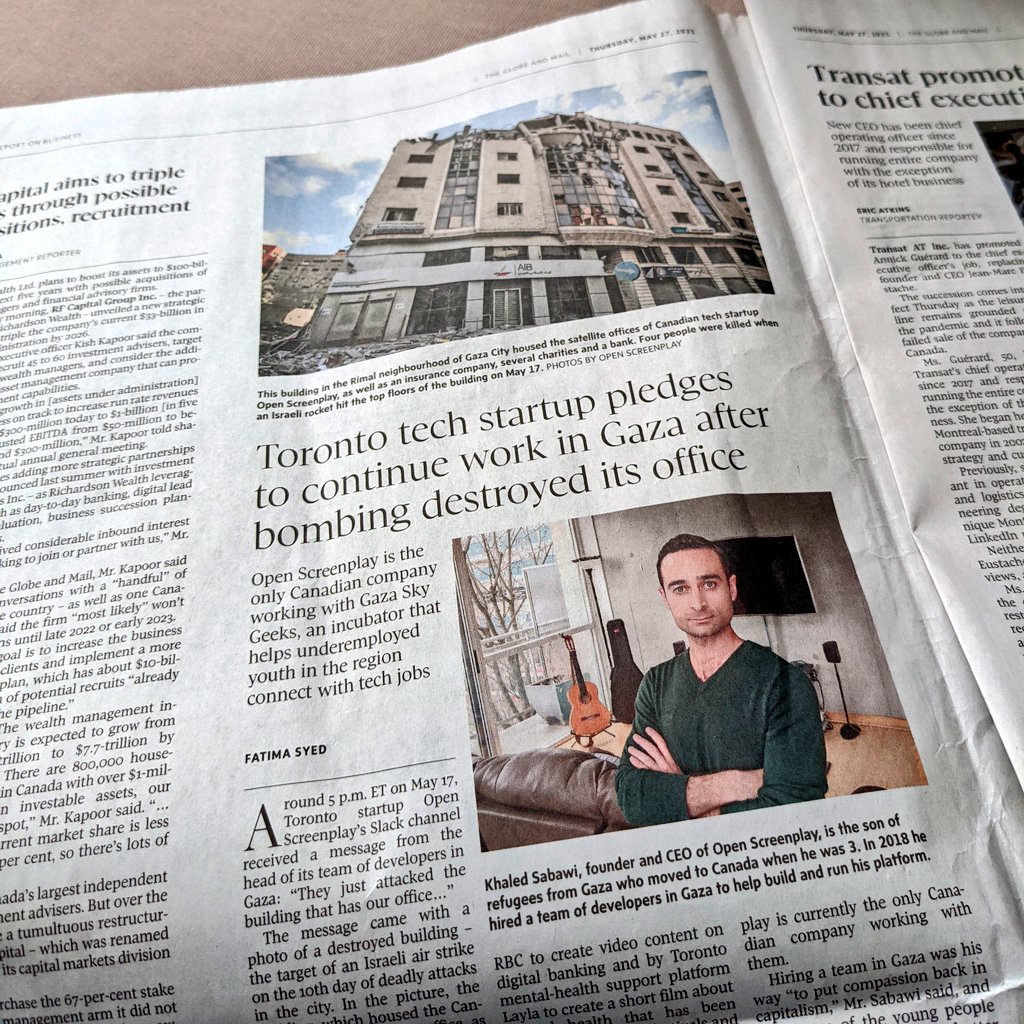 an Israeli airstrike had targeted the “main operations center for Hamas’ internal security forces” and Israel therefore, argued that it was a legitimate target. Keep in mind, Hamas embeds its weapons and terrorists in civilians population centers, a bona fide war crime.

HRC pleaded with the Globe to amend its online article and to issue a clarification notice to acknowledge that Israel claims that this airstrike targeted Hamas terror infrastructure, but to no avail. The Globe also failed to answer if the IDF gave advance warnings to residents to evacuate the area, nor did the paper indicate if their reporter asked the IDF for a response to this incident. The Globe refused to acknowledge this vital context which we conveyed stood in violation of the Globe’s own editorial standards.