Remembrance Day honours the memories of those who served, and who continue to serve our country during times of war, conflict and peace. It’s not a day to lionize arch-terrorist Yasser Arafat as a “larger than life” figure, who in reality was only a ruthless pioneer of modern terrorism.

The Globe presented “old man” Arafat in almost iconic light, a statesman and a “resister” in the following Patrick Martin report on November 11: 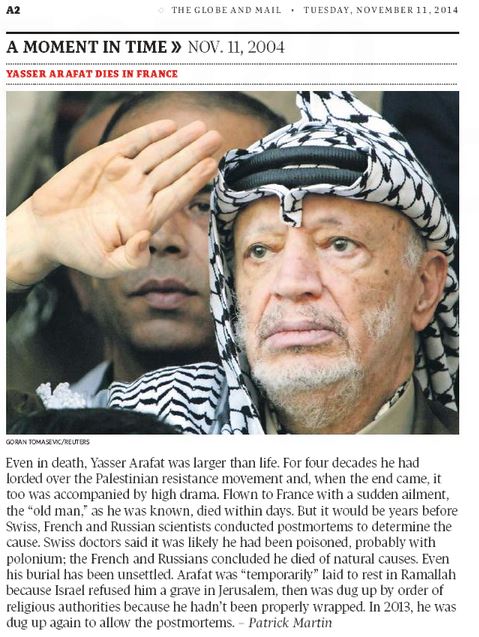 The Globe failed to tell its readers that Arafat was responsible for the murder of almost 1,000 Israelis and the maiming of many thousands more. Arafat incited Palestinians to commit terror against Israelis via its official PA media, its educational infrastructure, and in public pronouncements. Instead of informing Canadians of Arafat’s dark legacy and his bloodstained career of terror, Arafat was whitewashed and his terror resume ignored.

It was an insult to the memory of these Israelis, and to the many Canadians who passed while serving our country, to remember Arafat on Remembrance Day in a “Moment in Time” report prominently featured on the 2nd page of the Globe.

Giving credence to conspiracy theories alleging Arafat was “poisoned” by Israel was deeply regrettable. Absent from this report, Arafat’s dark legacy where he ruled supreme as a tyrannical despot and a kleptocrat. His dubious resume includes innovating hostage-taking, air-plane hijacking, school massacres, and suicide attacks. Yet beyond the terrorism, extortion, embezzlement, incitement and intimidation lies Arafat’s most unfortunate ongoing impact: The inculcation of murderous values in a Palestinian populace, who were educated under Arafat’s direction to continue the fight of “jihad” against Israel, rather than compromise to end the decades-long conflict. These values help explain how six Israelis were murdered in terror attacks just this month alone.

Lest we forget, Arafat was the godfather of modern terror.

HonestReporting Canada has already conveyed our concerns to the Globe’s Editor-in-Chief, David Walmsley and its Public Editor, Sylvia Stead, but if you are interested in filing a complaint with these editors, letters can be sent to: SStead@globeandmail.com and dwalmsley@globeandmail.com.