On October 26, the Globe and Mail published an Associated Press wire article in its print edition with the following erroneous headline: “Israel plans more than 1,300 new settlements in West Bank.”

In correspondence with the Globe, HonestReporting Canada conveyed that this was an innocent mistake for sure, but the implication was serious. Israel is planning to build 1,355 homes within existing settlements to account for the natural growth of its citizens, it is not building 1,300 new settlements.

We also conveyed the following observation, that Globe editors could have also featured the following headline to this report, but didn’t: “Israel plans to authorize 1600 housing units for Palestinians in the West Bank.“

This context was featured as the concluding paragraph of this report, but that curiously didn’t make the headline even though Israel is building 245 more homes for Palestinians than Jews.

We are pleased to note that on October 27, the Globe published the following correction to set the record straight: 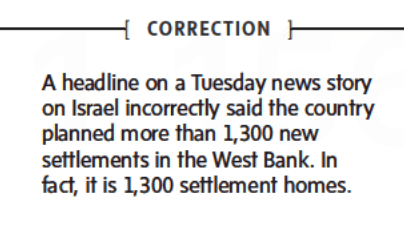 What the media doesn’t tell you about the...

What the world gets wrong about Israeli politics:...

A Journey From Being a Bedouin Shepherd to...

Behind The Headlines, Israel and Saudi Relations Blossom

Demographically Speaking, Is Israel Going to Lose its...