Original communique (June 30): Earlier this morning, 13-year-old Israeli girl Hallel Yaffe Ariel was brutally murdered in cold blood by a Palestinian terrorist near Hebron. The terrorist broke into her home and stabbed her to death while she was sleeping.

Only a couple days prior, an aide to Palestinian President Mahmoud Abbas explicitly stated that “Where ever you see an Israeli, slit his throat.”

In covering this attack, Globe and Mail editors published the following Associated Press article to its website giving it the following offensive headline which sanitized this gruesome act of Palestinian terror (emphasis added): “Palestinian teen shot dead after fatally stabbing Israeli girl in her bed”. 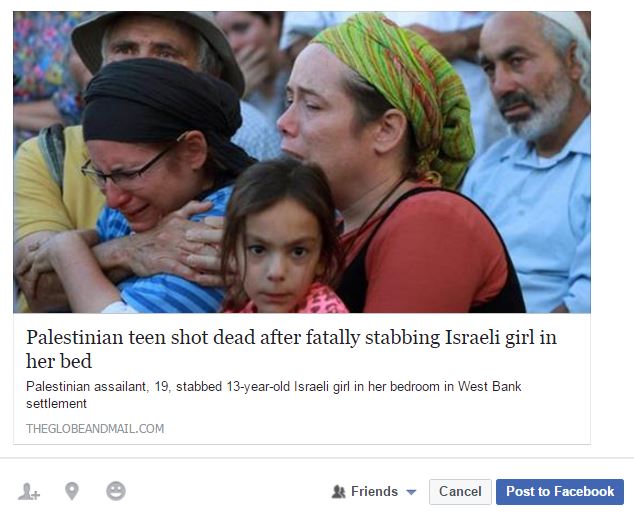 The article can be viewed online by clicking here. As well, the Globe Tweeted the article to its 1,343,236 followers with this offensive headline (please note criticisms of other followers):

Shame on the Globe for placing undue emphasis on a “Palestinian teen (who was) shot dead”, as if he was innocent, a victim perhaps, when in fact he committed an odious terror attack and was attempting to flee the scene, but his escape was thwarted by Israeli forces. The Globe’s main headline downplayed and whitewashed the terrorists’ actions and its failure to describe him as an attacker was deeply regrettable. To place the death of the assailant ahead of the death of the victim is unconscionable and is tantamount to journalistic malpractice.

This headline has since been amended by the Globe and it now states the following: “Palestinian kills Israeli girl, 13, sleeping in her bedroom”

As a means of comparison, the Toronto Star and National Post’s headlines were above board from our perspective:

HonestReporting Canada has reached out to and called on Globe and Mail Editor-in-Chief David Walmsley to issue a mea culpa to atone for this offensive headline which was appropriated by Globe and Mail editors and we encourage you to do the same by sending a complaint and registering your concerns. Send emails to: dwalmsley@globeandmail.com.

Watch this space for further updates.

Update (July 4, 2016) Globe and Mail editors added insult to injury by publishing a wire brief in its July 1 print edition that felt it necessary to malign the dead 13-year-old Israeli girl (a victim of Palestinian terror) as a “Settler child killed in her sleep”. In truth, Hallel Yaffe Ariel was an Israeli-American citizen and she should not be denigrated as a “settler child”.