Earlier today, the Globe and Mail carried a Reuters article on its website with the following highly misleading headline: 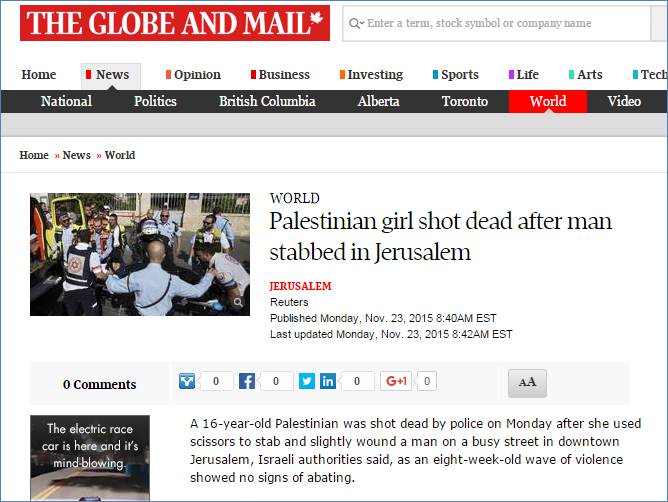 Unknown to most people who read this headline, the Palestinian girl who was shot dead was the one who attacked the man, who turned out to be a Palestinian and not an Israeli that she believed him to be. This female Palestinian teenager and another 14-year-old Palestinian girl used scissors in an attempt to stab and mortally wound Israelis.

Importantly, readers of news articles typically read headlines 3:1 over the adjacent article. As a result, these readers were easily mislead into believing that an innocent Palestinian girl was shot dead. Here’s how the article appeared on the Globe’s homepage via its world news section and on its Twitter feed: 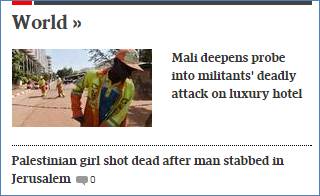 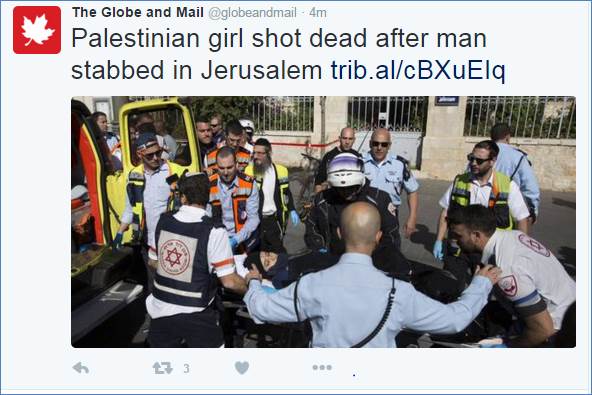 The article itself reported:

“A 16-year-old Palestinian was shot dead by police on Monday after she used scissors to stab and slightly wound a man on a busy street in downtown Jerusalem, Israeli authorities said, as an eight-week-old wave of violence showed no signs of abating.”

“The 70-year-old man stabbed by the teenager was also a Palestinian, a resident of the Israeli-occupied West Bank whom she apparently mistook for an Israeli.

A second Palestinian girl, aged 14 and also carrying scissors, took part in the attack, and she was shot and wounded by the same police officer who killed the other assailant, police said, adding that the two teenagers were related.”

We strongly believed this headline should be amended to reflect the fact that this dead Palestinian girl was an assailant who had carried out this attack. HonestReporting Canada asked the Globe to take action to set the record straight. Subsequently, the Globe amended this article’s headline which now states the following:

As we told the the Globe’s Public Editor, Sylvia Stead, this new headline was not satisfactory. Again, unclear from this headline is how two of the 3 dead were the Palestinian terrorists themselves, and the other casualty was an Israeli. In this headline, the victims are equated and lumped in with the dead terrorists. And it’s important to mention that these separate attacks occurred in Jerusalem and in the west bank. We again encouraged the Globe to amend this headline in the interests of fairness and accuracy. Regrettably, the Globe declined our request. According to Public Editor Sylvia Stead (emphasis added): “I make corrections in the event of significant factual errors. This headline is not significantly factually wrong.”

Despite documenting how this article was seriously unfair, was misleading, and contained an error, the Globe refused to take any remedial action. For the Globe, this incident of media bias against Israel wasn’t “significant” enough to necessitate corrective action.

To communicate your concerns with the Globe and Mail about this matter, please send emails to Public Editor Sylvia Stead at sstead@globeandmail.com.