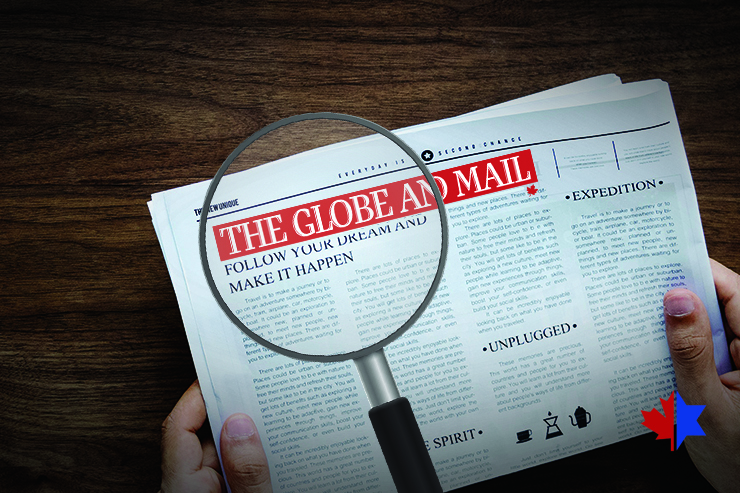 On April 22, HRC liaised with senior editors at the Globe and Mail expressing our concerns regarding a Mark Mackinnon article published the day prior which we felt contained errors and which lacked context about Israel’s plans to apply sovereignty to the Jordan Valley and Area C of Judea and Samaria (the “West Bank”) per the Trump peace plan.

Mr. Mackinnon’s article was entitled: “Coalition deal a clear victory for Israel’s Netanyahu as questions swirl around his upcoming trial” (online only).

Mr. Netanyahu left his opponents with little choice but to join him in government if they wanted to avert a fourth consecutive election. He now has the green light to move ahead with plans to annex some or all of the West Bank – which has been under Israeli military occupation since a 1967 war – in accordance with the peace plan unveiled earlier this year by U.S. President Donald Trump. The plan upends decades of U.S. foreign policy and could inflame the conflict, say experts.

Israeli media reports say the coalition agreement includes a clause allowing for territorial moves in the West Bank as early as July 1.

The country’s political right has long sought the annexation of Jewish settlement blocs in the West Bank, as well as the strategic Jordan Valley. The construction of settlements is considered by most countries as breaking international law because they sit on occupied land. Such moves would dramatically undermine the feasibility of an independent Palestinian state. “The formation of an Israeli annexation government means ending the two-state solution and the dismantling of the rights of the people of Palestine as established under international law and resolutions,” Mohammad Shtayyeh, the prime minister of the Palestinian Authority, said Tuesday.”

Firstly, the Israeli unity government deal promises only a vote on applying sovereignty in the “west bank” in July, it is not a fait accompli. As the Times of Israel reported:

According to the wording of the “emergency government” deal between the Likud and Blue and White, from July 1, 2020, Netanyahu “will be able to bring the agreement reached with the US on the application of sovereignty [in the West Bank] for the approval of the cabinet and or the Knesset.” Furthermore, “if the prime minister chooses to bring the proposal before the Knesset, he will be able to do the same through another MK, provided that the lawmaker is from the Likud party who will be obligated to ensure that the legislation is identical to the version placed before the cabinet.”In addition, “the law will be passed as quickly as possible… and will not be disrupted or delayed by the chairmen of either the House or the Foreign Affairs and Defense committees.”

Secondly, a nation cannot annex land over which it already has sovereign claims to, hence Israel doesn’t use the word “annex” and it does not consider the areas of Judea and Samaria (“west bank”) as “occupied” because there was no sovereign at the time of the defensive Six Day War in 1967.  Jordan occupied and administered the land from 1948-1967 after Israel’s 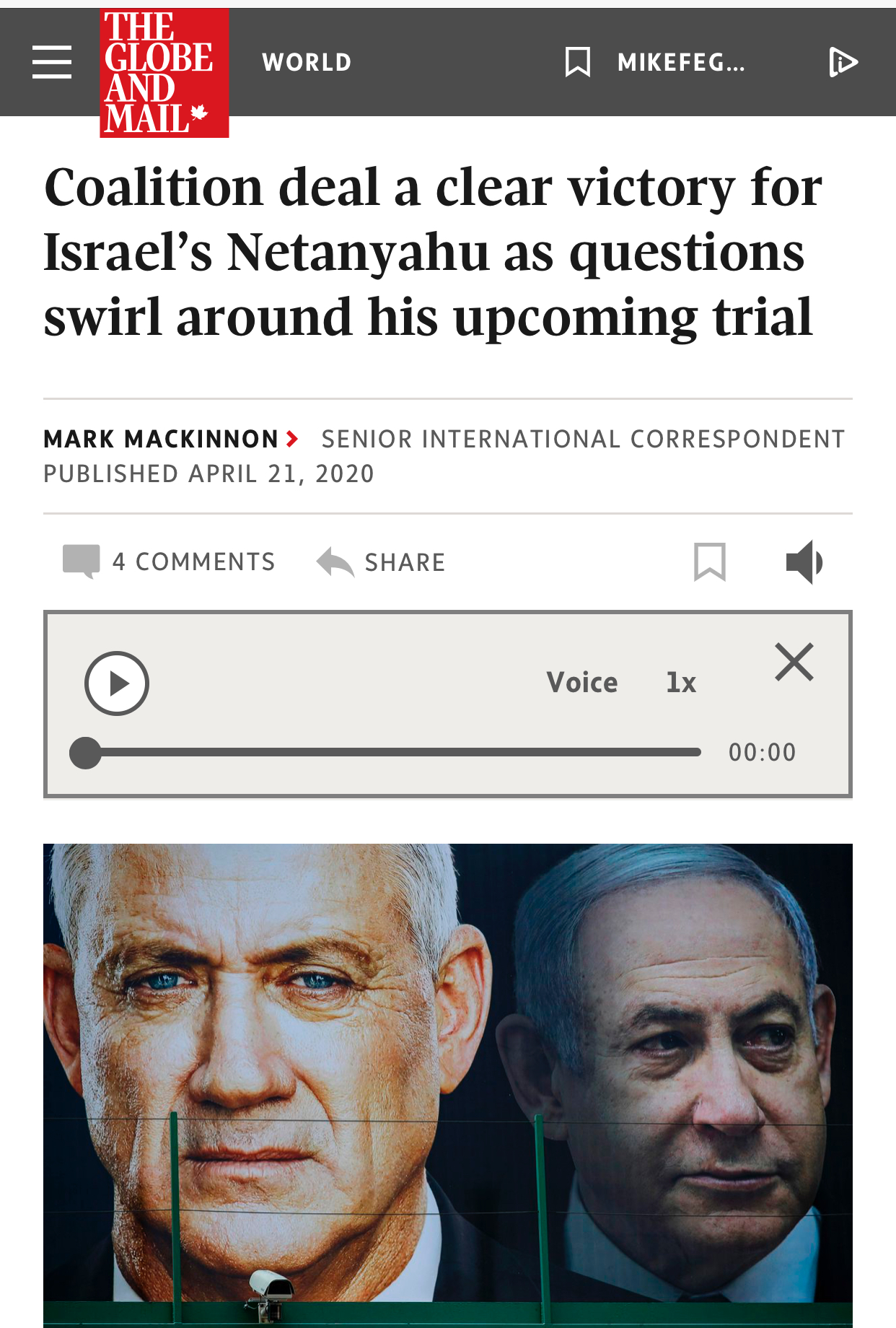 War of Independence. Jordan did not have sovereignty over the land which was formerly a part of British Mandatory Palestine. Accordingly, we took issue with Mr. Mackinonn’s failure to acknowledge that Israel disputes claims that its settlements are illegal as Israel cites pressing security concerns and has biblical, historical and political connections to the land. See how Reuters has acknowledged this vital context here, whereas the Globe does not and Mr. Mackinnon consistently ignores Israel’s claims.

Israel has spoken of applying sovereignty to the Jordan Valley and 30% of Area C territory per the Oslo Accords. These areas are largely unpopulated by Palestinians and are limited in size and the planning is consistent with past U.S. peace plans that have long understood that Israel will retain these areas in a final peace accord.

The three areas requiring rectification were:

1) The unity deal only allows for a vote on applying sovereignty to areas of the west bank and the Jordan Valley, it does not give Netanyahu a “green light” to “annex” the areas in question as the Globe describes. Israel’s “political right” has “long sought to (apply sovereignty) to Jewish settlement blocs in the “West Bank”, as well as the strategic Jordan Valley.” it’s highly inaccurate to say that Netanyahu now has the green light to annex some or all of the west bank. Why is this the case? A) It has to go to a vote first at the Cabinet or Knesset. b) Israel can’t “annex” the land because it has sovereign claims to the land and c) only 30% of the “west bank” and the Jordan Valley are being considered by Israel for sovereignty application, not potentially “all of the west bank” as described by Mackinnon.

2) The Globe’s report should acknowledge that Israel has not renounced claims to Judea and Samaria, as Reuters has referenced this context and to specifically mention that it has security needs and biblical, historical, and political connections to the land.

3) The following statement of Mr. Mackinnon’s should be in attribution: “Such moves would dramatically undermine the feasibility of an independent Palestinian state (according to Palestinian officials).” As it’s worded, how is this an objective statement? It’s one thing to attribute this to Palestinian officials, but as is, it’s stated as a fact. Israel and the Trump administration would surely claim that Israel’s plans to apply sovereignty over the Jordan Valley and 30% of the west bank don’t impede the feasibility of the creation of an independent Palestinian state. Palestinians can surely claim to the contrary, and that’s fine, but we’re talking about objectivity here and neutrality on the topic and ensuring that there’s proper attribution. Not to get into the minutiae of the matter, but the real issue is if there can be what’s referred to as “territorial contiguity” between Gaza and the “west bank” and this is a contested matter. The Trump plan envisages a myriad of solutions such as tunnels and overpasses and bypass roads, etc. Whether territorial contiguity is feasible, that’s what’s up for debate.


Importantly, the Globe’s own journalistic principles and editorial code of conduct necessitates the corrective action we’ve called for.

The Globe’s journalistic principles: “The credibility of the content in The Globe and Mail on all platforms rests on solid research, clear, intelligent writing and maintaining a reputation for honesty, accuracy, objectivity and balance.”

The Globe’s own Editorial Code of Conduct: “The Globe and Mail will seek to provide reasonable accounts of competing views in any controversy so as to enable readers to make up their own minds.”

While we appreciate the Globe’s hearing out our concerns and taking them into consideration, regretfully, the Globe and Mail declined to take any corrective action, of any kind, which doesn’t speak well to its stated comittment to pursue honesty, accuracy and balance.