Writing in the Globe and Mail on April 21, Mark Mackinnon (reporting from Lebanon) wrote a lengthly feature about “Hezbollah’s homecoming: What happens when fighters return to Lebanon from a Middle Eastern mini-world war?” 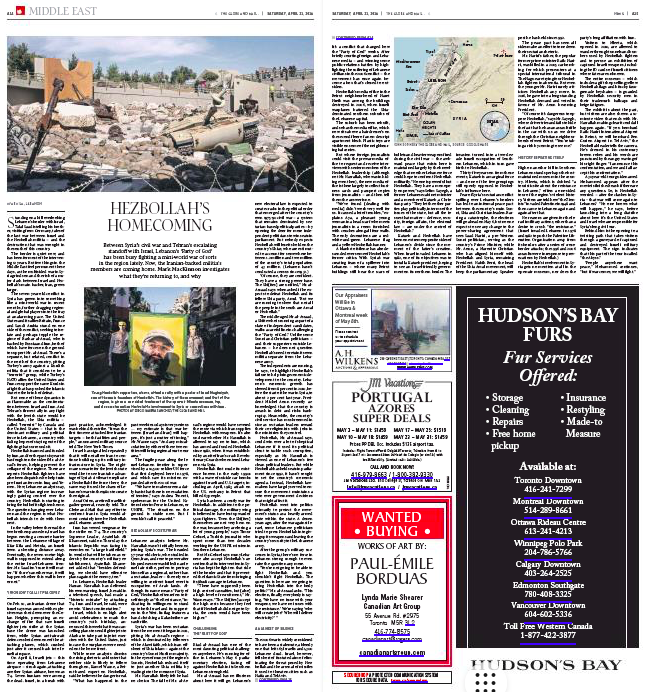 According to the Globe: “Between Syria’s civil war and Tehran’s escalating standoff with Israel, Lebanon’s ‘Party of God’ has been busy lately. Now, analysts say, the Iranian-backed militia’s members are coming home.”

After briefly courting foreign and Lebanese media − and winning some public-relations battles by highlighting the suffering of Lebanese civilians in the 2006 conflict − the movement has once again become a box that’s closed to outsiders.

Hezbollah’s media office in the Beirut neighbourhood of Haret Hreik was among the buildings destroyed in 2006, when Israeli warplanes battered the Shia-dominated southern suburbs of the Lebanese capital.

The suburb has been rebuilt, and so has the media office, which now sits above a hairdresser’s on the second floor of a non-descript apartment block. Plastic toys are visible on some of the neighbouring balconies.

But where foreign journalists could visit the prewar media office to request and receive interviews with senior members of the Hezbollah leadership (although not Mr. Nasrallah, who was in hiding even then), the new media office is there largely to collect business cards and passport copies from journalists − and then tell them the answer is no.

‘We’ve found [dealing with media] didn’t work very well for us. It caused a lot of troubles,’ explains Aya, a pleasant young woman in a headscarf who meets journalists in a room furnished with couches along all four walls. The only decorations are a red-white-and-green Lebanese flag and a yellow Hezbollah banner.”

Avid news readers may recall when CNN’s Anderson Cooper decried how Hezbollah had faked news scenes with ambulances and had placed children’s toys near the rubble of destroyed buildings to then claim that Israel had targeted civilian neighbourhoods.

Keep this in mind should Israel and Hezbollah fight another war in the not too distant future.