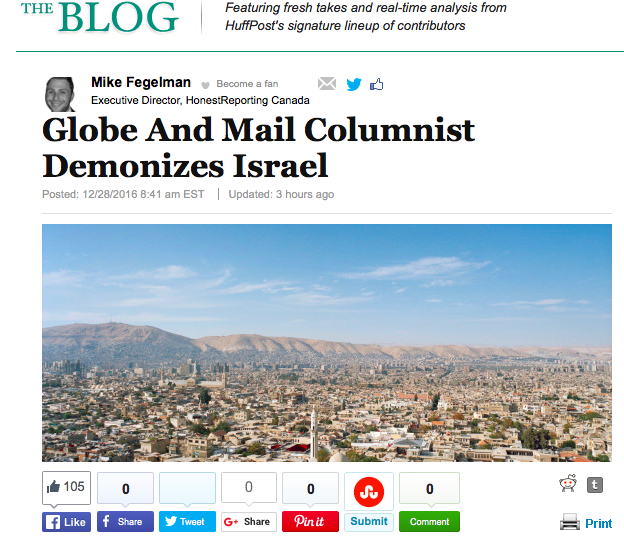 Writing in the Globe and Mail on December 13, you’d think that Gerald Caplan was referring to the wholesale massacring, maiming and maltreatment of hundreds of thousands of innocent Syrian civilians at the hands of Syria’s despotic dictator, Bashar Assad, but alas, these bilious words were directed at Israel, the only liberal democracy in the Mideast.

Though Bashar “The Butcher” Assad murdered half a million people, mostly civilians in chlorine gas attacks, barrel bombings, summary executions, rape and forced starvation of Palestinians in Yarmouk, true to form, Caplan penned a gratuitous and vacuous tirade entitled “Trudeau continues Harper’s policies on Israel” which assigned blame exclusively to Israel, condemning the Jewish state alone for the impasse in the Middle East peace process, all while absolving the Palestinians of any responsibility for their actions.

Gerald Caplan’s animus against Israel is well known. Walrus Magazine Editor-in-Chief Jonathan Kay described Caplan as “a confused leftist” who once “authored an op-ed that was so hysterically anti-American and anti-Israel that I actually found it shocking that any mainstream newspaper had agreed to publish it… Caplan argued that the campaign to pressure Iran to stop its nuclear programs is the stuff of “lunatics,” that Israel is as much a threat to world peace as Iran, that Iran’s nukes would be of no more concern to us than Israel’s or France’s, and that Canada’s leaders are mindless foreign-policy automatons who will do anything that their Zionist masters in Tel Aviv tell them to do.” This invited a forceful rebuke by then Canadian foreign affairs minister John Baird.
That Canadian Prime Minister Justin Trudeau has shown stalwart support for Israel is to be lauded, not lamented by Caplan and is revelatory of the true friendship and common values that Canada and Israel share. Claiming that former prime minister Stephen Harper’s support for Israel was “Pavlovian,” fundamentally ignores that Harper had a principled moral compass which influenced his standing with Israel through “fire and water.”
When Caplan bemoans that “The conflict has no credible solution for the foreseeable future – Israel will never consider a single state incorporating both peoples,” he tacitly advocates for the Jewish state’s destruction as the one-state solution is a demographic ticking bomb where millions of Palestinian refugees and their descendants replace Israel as another Arab-majority state in the region.

Egregiously, Caplan claims Israelis inflict brutality against “… mostly defenceless Palestinians… men, women and children, old and young.” Untold is that during the unrelenting wave of terror in Israel from September 2015 to present day, 42 people were killed in terrorist attacks and 577 people (including 4 Palestinians) were injured. Israel’s Ministry of Foreign Affairs says “There have been 166 stabbing attacks and 89 attempted stabbings; 109 shootings; 47 vehicular (ramming) attacks; and one vehicle (bus) bombing.”

Terror doesn’t occur in a vacuum and terrorists are born from nurture, not nature. Fanning the flames and provoking this recent terror war is a sustained campaign of incitement to violence, indoctrination of hate and justification of terror that is being promoted, financed, and instilled in all facets of Palestinian society.
Palestinian Authority President Mahmoud Abbas – whom Caplan pejoratively refers to as “effectively an Israeli collaborator” – continues to pay stipends to terrorists and their families, refuses to condemn these barbaric terror attacks, or to stop inciting his people with incendiary statements such as his “bless(ing) every drop of blood spilled for Jerusalem.” While Gerald Caplan is entitled to his own opinions, he’s not entitled to his own facts. Caplan misleads Globe readers by tendentiously referring to alleged Israeli building on “Palestinian lands,” but fails to explain that Palestinians have never been sovereign rulers to these lands and that the status of the west bank is fundamentally disputed and is to be resolved pending negotiations. Both Jews and Arabs have competing claims to the territories. Israel has legitimate claim to these areas in accordance with international law and bearing in mind its ancestral and historical rights to the lands of Judea and Samaria where it claims sovereignty. Israel acquired these territories in a war of self defense in 1967 and UN Security Council Resolution 242 authorizes Israel to remain in possession of the land until it has “secure and recognized boundaries.” The Jordanian occupation of the west bank happened after Israel was established in an offensive pan-Arab war to exterminate the nascent Jewish state and continued from 1948-67, until Israel won these lands and others in the Six Day War in self defense.

Contrary to Caplan’s assertions, Prime Minister Netanyahu supports a two-state solution, naturally, under the right circumstances where a future Palestinian state wouldn’t post a security threat to Israel and where final status issues like settlements, borders, refugees, Jerusalem, etc. are to be negotiated, not unilaterally imposed. Israel hasn’t built a single settlement in many years and has taken efforts to dismantle illegal outposts such as in Amona. An increase in the population in some settlement areas is only due to the natural growth of those living there. Would Caplan support a quota on births and a restriction for settlers to have children thereby denying them self-determination? Israeli settlements aren’t the primary obstacle to Mideast peace, despite UN Resolution 2334’s saying so. They weren’t an obstacle when Labor leader Ehud Barak was in power and was building settlements at four times the pace set by Netanyahu’s government, and they weren’t an obstacle when Kadima leader Ehud Olmert was in power and building was proceeding at twice the pace seen under Netanyahu. As prime ministers, right-leaning Likud leader Menachem Begin ceded all of the Sinai to make peace with Egypt and right-leaning Kadima leader Ariel Sharon unilaterally destroyed all Gaza settlements, removed 8,500 settlers and its combined armed forces in a policy known as “disengagement”. Benjamin Netanyahu is the only Israeli leader to have ever instituted both a 10-month and a quiet 18-month moratorium on settlement building. Under the Netanyahu administration, settlement construction has grown at a slower rate than in the past 20 years.

The Palestinians have been offered many generous peace offers over the years, which have only been met with recalcitrance, rejectionism, intransigence and violence. Should the Palestinians agree on a peace plan affording Israel ironclad security guarantees, Israel would happily pull out and concede the territories. However, Israel is mindful that when it pulled out of Gaza in an effort to procure peace, all it got in return where tens of thousands of rockets shot at Israeli cities and the outlawed Hamas terror group at its doorstep and burrowing deep underground in terror-attack tunnels.

Israel has tried to offer solutions, however, the Palestinian’s failure to disavow terror, their refusal to recognize Israel’s right to exist and their unyielding demands for a Palestinian state to be created from the Mediterranean to the Jordan River, are the true barriers to Mideast peace.

Mike is the Executive Director of HonestReporting Canada and is responsible for the day-to-day running of the organization, its financial management and project development. A seventeen-year veteran of the Canadian journalism industry, Mike was a former editor-in-chief, reporter, and anchor of various news programs and publications. Mike’s focus is on delivering efficiency and professionalism as HRC moves into new technological and geographical spheres. Mike is a human rights expert and a frequent on-air commentator. His work has been published in the Globe and Mail, the National Post, Toronto Star, CBC News and more.