Correction (February 12, 2016): In an HRC blog post on July 17, 2014, we reported that then Globe and Mail Mideast Bureau Chief Patrick Martin had witnessed several Palestinian rockets being launched near a UN school in Gaza. Several weeks later, we published an HRC blog post which asked rhetorically “one wonders when specifically they (reporter Martin and CBC reporter Derek Stoffel had) witnessed this rocket-fire and why their statement’s only came out mid-ceasefire?” In fact, as we had earlier reported, Globe and Mail journalist Patrick Martin had reported on this matter on July 17, 2014.

Following the ceasefire between Israel and Hamas, Canadian journalists Patrick Martin of the Globe and Mail and Derek Stoffel of CBC both acknowledge having personally witnessed Hamas terrorists firing rockets from within Palestinian civilian areas.

Patrick Martin today details how he saw a long-range rocket fired near a UN school filled with over 1,000 people:

“Israelis said they sought to destroy rocket launch sites and arsenals, both often concealed within populated areas. On three occasions, Hamas was found to have used United Nations schools to conceal armaments. This correspondent witnessed the launch of a pair of long-range rockets from a site in Jabaliya, very near a UN school filled with more than 1,000 people seeking refuge from Israeli shelling in their home neighbourhoods.”

Derek Stoffel on CBC National yesterday noted that Israel says “Hamas uses Palestinian civilians as human shields” and then stated that “Over the past few weeks Peter, I’ve seen several rockets from where I am tonight in northern Gaza, we wanted to talk to Hamas but were told its fighters aren’t ready just yet to speak to reporters.” 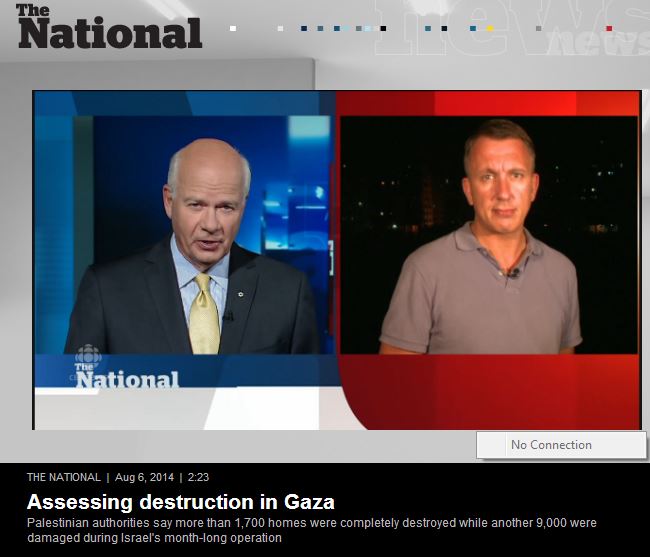 While it’s a positive that these reporters made these statements, one wonders when reporter Derek Stoffel witnessed this rocket-fire? Furthermore, did these reporters inform the Israel Defense Forces of Hamas terrorists firing from these Palestinian civilian areas?

Keeping in mind, Hamas has been threatening and intimidating international journalists for its using Gazans as human shields. Even CTV News reporter Janis Mackey-Frayer was threatened according to the Jerusalem Post who noted:

One passed dressed in a woman’s headscarf… tip of a gun poked out from under cloak.”

She received threats similar to those sent to other reporters.”